Officials contending with raw emotions and clashing agendas, as enemies vie to gain and exert international control, while also dealing with personal separation and loss, are characteristics often seen in war films. But in the first modern Hollywood film about the American occupation of Japan after World War II, ‘Emperor,’ strives to show how secret love and international mystery shows how trust between enemy countries do continue after the surrender of one of the countries. The new Peter Webber-helmed historical war drama not only chronicles America’s determined search for Japanese war criminals, but also calls into question what happens when government officials don’t also agree on how to best deal with the surrender of their enemies.

‘Emperor’ follows the American occupation of Japan in the perilous days just after Emperor Hirohito’s surrender in World War II. General Douglas MacArthur (Tommy Lee Jones) suddenly finds himself to be the de facto ruler of the foreign nation. He assigns General Bonner Fellers (Matthew Fox), an expert in Japanese culture and psychological warfare, to covertly investigate the looming question of whether the Japanese Emperor, who is worshiped by his people but accused of war crimes, to be punished or exonerated. Fellers is caught between the political intrigue of his mission and his own impassioned search for the mysterious Japanese school teacher, Aya Shimada (Eriko Hatsune), who first drew him to Japan. The only thing he’s sure of is that whatever decision he makes on the Emperor’s part in the war will forever change the history of two nations and his heart.

Fox was well cast in the complex lead role of Fellers. The actor realistically portrayed the character as being determined in his duty to find the truth about the Emperor’s part in the war, while also being sympathetic to the plight of the Japanese citizens in the aftermath of their country’s bombing. The actor showcased his character’s unquestionable dedication to MacArthur and the military’s operation in bringing down the Japanese war criminals. Fox also humbly emphasized Fellers’ love for Aya and his sympathy to her and her fellow citizens in the devastated country. Through Fellers’ love for Aya and his desire to understand the reasons why she is the way she is, as well as his insight into psychological warfare, the general isn’t perceived to be fixated on the one goal of bringing down the Japanese government, unlike MacArthur. Fellers is also portrayed as being respectful of MacArthur’s decision and understanding of the pressure he’s experiencing from the government in Washington, D.C. But Fellers never lets the general’s personal agenda persuade him in his reports and decision, showcasing his will to be independent and not swayed by government agendas.

Director Peter Webber impressively showcased the drastic differences between the ways of life of the people in Japan, from the poor living on the streets in the aftermath of the bombing to the impressive, elaborate homes of the country’s higher society. Webber visually emphasized the desperation and struggling the Japanese were experiencing in the aftermath of the war through stunning sets and cinematography. ‘Emperor’s production designer, Grant Major, used the burnt-out industrial site known as Southdown to create the streets of Tokyo. The collapsed buildings were the perfect location to showcase the chaos and danger of the shattered city, with families being forced to live in decrepit tents, as they struggled to rebuild their lives. The upper classes in Japan, however, were able to maintain their lavish lifestyles. Major utilized historic pictures of the Imperial Palace to showcase the large rooms and exquisite furniture the Emperor used.

Cinematographer Stuart Dryburgh also intriguingly emphasized Japan’s extreme living conditions, and bleak sense of hope of rebuilding the cities damaged from the bombing, through shadows and sharp angles. He also uniquely defined the attitudes of Fellers and the Japanese government and people through distinctive color tones. While Fellers is investigating the Emperor and the allegations of war crimes, the cinematographer shot in bleak greys to highlight the pain and suffering the country’s involvement had on the world. But to showcase Feller’s growing love and relationship in the 1930s when the two first met, Dryburgh shot in a more colorful, vivid palette, relaying the hope of a potential love between the general and Aya.

Webber also added realism to the historical war drama through the authentic, artistic costumes that were designed by Oscar-winning costume designer Nigila Dickson. Through extensive research into the fashions of the time period, Nigila created distinctive styles that reflect each character’s personality and place in society. From the diverse uniforms that reflected the American soldiers’ ranks to the contemporary dresses Aya wore while spending time with Fellers to the traditional kimonos worn by her influential uncle, the diverse costumes truly showcased the different classes and views of life in both Japan and America in the 1930s and ’40s.

Since Feller’s story hasn’t been widely told, as he was considered to only be a minor figure in MacArthur’s team in Japan after the war, ‘Emperor’s screenwriters, Vera Blasi and David Klass, did extensive research into the general’s background to accurately tell his story. While the inclusion of Feller’s memories of his time with Aya while they were both attending college in America in the 1930s provided a thorough explanation of his motivations to uncover the truth about the Japanese war crimes, the extensive interweaving of the two time periods unfortunately left the story feeling lagging. The characters are psychologically rich and well developed in the film, particularly of the young general on a quest for answers. However, Feller’s continued search for answers into what happened to Aya after she returned to Japan after college, and his extensive pursuit for answers into the reported war crimes committed by the Japanese government, becomes redundant as he excessively ponders the dramatic change in a country he admires.

‘Emperor,’ the first contemporary Hollywood film set during the U.S.-led occupation of Japan at the end of World War II, emotionally tells a story of secret love and international intrigue. As Fellers put his career on the line to uncover the truth about the emperor’s involvement in the war, and searches for what happened to Aya, the historical war drama shows the dangers of mixing politics and love. While Webber also emphasized the disparity between the different classes after the war, through fantastic sets, costumes and cinematography, the movie’s plot unfortunately lagged the further Fallers continued his searches. Despite the drawn out elements of the story, the film offered a humanizing view on a man, who was considered to play a minor part on MacArthur’s team, who truly helped shape the paths of two powerful countries. 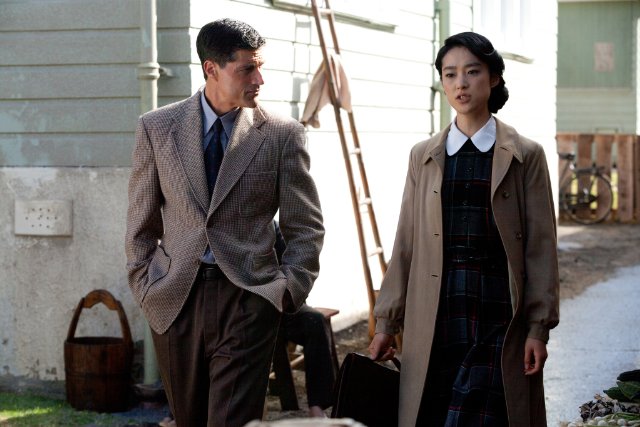