You can have one good short film. You can even have five that are all solid. But 26?

“The ABCs of Death” is a horror anthology consisting of 26 shorts from 26 different directors all of whom accepted the challenge of taking a single letter of the alphabet, picking a word that begins with that letter and then making a short film about death with that word at the core. There are some highly successful efforts, but, again, we’re talking about 26 short films here; an unappealing percentage is inevitable whether it’s due to quality of simply just not being in line with personal preferences.

Considering there is no wraparound and each and every piece is extremely unique, rather than just assess “The ABCs of Death” as a whole, we’ll break it down by letter.

A: Nacho Vigalondo’s “A” is a somewhat amusing display of violence, but between the insignificant amount of exposition and ill-fitting title, it winds up being nothing more than a senseless dose of brutality.

B: Again, a little light on plot and purpose, but Adrian Garcia Bogliano does put forth a charmingly warped child’s bedtime story that manages to stick even after poor little Xochitl’s experience with the tale comes to an end.

C: A curious scenario, but poor pacing makes the piece far less suspenseful than it needs to be. With so little time to build the lead character, it’s not concern for his safety that gives “C” momentum, but the story alone and it’s just not pieced together effectively enough to make the viewer feel the threat.

D: As someone who cried her way through “Frankenweenie,” I should be entirely turned off by Marcel Sarmiento’s “Dogfight,” but the stunning slow motion visuals build towards such a wildly satisfying payoff that they justify the unpleasant subject matter.

E: A simple, cute one-on-one between a guy and a house spider turns into a far more alarming situation after the man thinks his unwanted houseguest is long gone. The build to the climax is on the weaker side, making Angels Bettis’ entry less intense than it could have been, but the piece does make for one of the more entertaining watches, even if it’s just a fleeting sensation.

F: Everyone’s got boundaries when it comes to fart jokes and Noboru Iguchi’s “F” certainly can be a bit too much for some. The piece is actually more fleshed out than most, but if you’re easily perturbed by farting to excess, you might be too nauseated to appreciate the humor.

G: Andrew Traucki does a solid job of putting the audience in a surfer’s position by using the found footage format, but the piece’s grand finale is too weighty for this tiny short to handle, making it a bit of a downer.

H: There’s really no appropriate way to sum up the entry for “H,” but the short’s outrageously unique plot, unusual characters and vibrant set and costume design are all so absorbing, you’re ready and excited to handle all the heightened madness Thomas Malling throws your way.

I: Between the slow pace, the overly artful narration, the grotesque imagery and incredibly grating background tone, “I” is a tough one to get through. Even worse, your patience and resolve isn’t even rewarded as there’s zero payoff at the short’s conclusion and the letter reveal.

J: Yudai Yamaguchi’s “J” certainly has a unique sense of humor, but with little to no narrative, the gags just aren’t funny enough for this warped display of a samurai execution to have a lasting impact.

K: Usually not one for gross-out poop jokes, I’m shocked to say my favorite short of the bunch is an animated piece about a woman who can’t manage to flush her poo down the toilet. “K” is loaded with laughs, comes with a dose of well-earned gore, and features – dare I say it? – the most adorable piece of sh*t I’ve ever seen in my life.

M: Keeping in line with a good deal of his resume, Ti West dishes out a bloody scenario that hits hard, but without violence. The large majority of his short is curious yet unremarkable, but then West hits you with the letter reveal and it winds up being more of a smart, punch to the gut than most.

N: Banjong Pisanthanakun wins big by not taking his short too seriously. We’ve got an emotional moment between a man and his girlfriend, but it’s their charming pet bird that steals the spotlight courtesy of some innocently destructive behavior.

O: More of a montage than a story, Bruno Forzani and Héléne Cattet’s submission for “O” feels more like a mindless intermission rather than a viable piece of the anthology.

P: Hands down the worst letter of “The ABC’s of Death” due to animal cruelty. Whereas “D” approaches its testy subject matter with a degree of aestheticism, “P” is so heartless and blunt, it’s enraging.

Q: Adam Wingard and Simon Barrett get shafted with the letter “Q,” but the duo uses it to their advantage by making their short about just that. The piece’s big finish is a little predicable, but Wingard and Barrett make for amusing leads and have no trouble entertaining from beginning to end.

R: Srdjan Spasojevic’s “R” boasts a wildly intriguing main character and situation, but the plot fizzles out into a strange and confusing conclusion.

S: Jake West tries to keep things contained, concluding his grand scale desert car chase with an intimate twist, but by that point, your mind’s wandered too much for it to have the intended effect.

T: “The ABCs of Death” animation goes two for two. This is a horrific yet charming little tale about a boy forced to say goodbye to his potty, face his fears and use a proper toilet.

U: A run-of-the-mill shaky cam film. The fact that the POV belongs to the threat rather than victims should make the bit stand out, but with little to no narrative, “U” doesn’t amount to much.

V: While this one does have the highest production value of the bunch, the futuristic tale about an officer tasked with eliminating illegal infants needs a much longer running time to earn such profound beats.

W: Jon Schnepp’s portion of the film is downright ridiculous – just as it should be. Coming after Wingard and Barrett’s Q, initially there’s concern about going the aware director route yet again, but Schnepp and co. throw so much maniacal nonsense in your face, it’s tough not to get some satisfaction from the title reveal.

X: Xavier Gens’ entry sends a powerful message, but this short about an overweight woman haunted by a bikini commercial is too violently unpleasant to appreciate.

Y: “Hobo with a Shotgun” director Jason Eisener makes an impression with a film about a junior high janitor being chased by a the head of a buck. The short plays like a music video, pounding to an 80s pop tune, helping to turn nauseating and grotesque material into something that’s oddly enjoyable before delivering one of the more satisfying and well-earned title reveals.

If you tally up the ups and downs, the grand total is in the film’s favor, but, even though “The ABCs of Death” is a compellation of smaller films, it’s still one feature in and of itself and in that sense, it also veers towards the positive side, suggesting the horror anthology format has potential. Clearly there are quite a few lulls, but because there’s 26 shorts crammed into the 124-minute running time, those lulls come and go pretty fast. Whether you’ve hit one of the film’s highs or lows, after the screen bleeds to red and concludes each short with its title reveal, you can’t help but to be excited and curious about what’s up next. 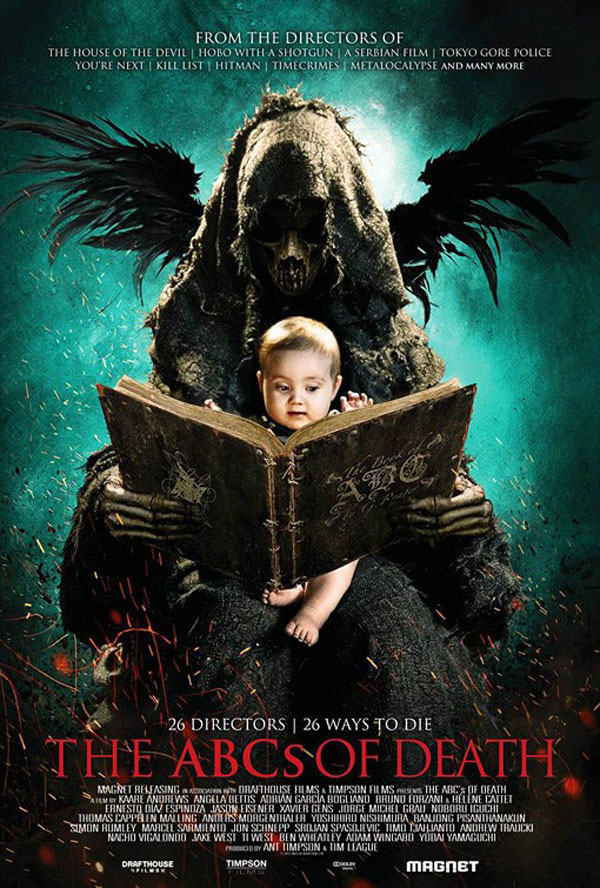 The ABCs of Death Poster