President Obama may have gotten in hot water recently by evoking the mixed metaphor of a “Jedi mind meld,” but “Star Wars” absolutists can seek solace in the form of “Jedi Junkies,” the nonfiction answer to 1999’s “Trekkies” and its subsequent follow-up exploration of “Star Trek” fandom. A “Star Wars” fan film on par with those geek-outs, this title is sure to be a warmly embraced subcultural hit — particularly as we move closer to a new big screen trilogy in the franchise.

Directed by Mark Edlitz, this brisk but rangy documentary takes a look at everything from “Star Wars” collectors and tribute bands to those who’ve fashioned their own spin-off fan films, like Aaron Yonda and Matt Sloan, the creators of “Chad Vader,” about a sad-sack grocery store manager. The interviewees here are a motley but generally entertaining bunch (the big gets are Olivia Munn and “The Blair Witch Project” co-director Eduardo Sanchez, a huge collector), and while it’s true that the film would have benefited from a tighter editorial focus and narrative partitioning, a lot of stuff here — like the stainless steel custom lightsaber replicas that Bob Iannaccone crafts — is engrossing enough in a certain throwaway, subcultural fashion so as to completely innoculate the movie against any lasting feelings of ill will or wasted time. Celebrating fandom is in and of itself an act of fandom, after all. 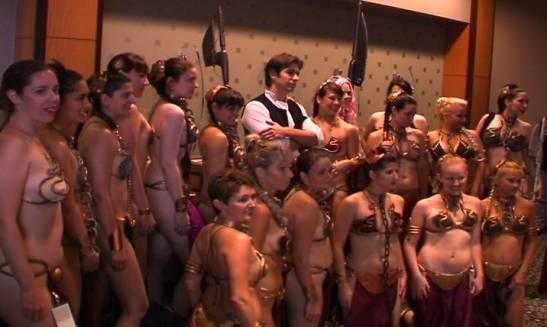 Housed in a regular plastic Amaray case, “Jedi Junkies” comes to DVD spread out over a dozen chapters against a non-motion menu screen, and presented in 1.78:1 widescreen with a Dolby digital audio track. An audio commentary track with the filmmakers is mostly a back-slapping affair, but 18 minutes of extended and deleted scenes provide some extra amusement — especially in the form of a guy with his own harem of bikini-clad Princess Leia impersonators.

At first blush, “Katy Perry: Part of Me” is just another part of the recent wave of 3-D-enabled concert documentary hagiographies, designed to extract money from moviegoers’ wallets and purses by preaching to the choir. And on a certain level it is that, to be sure. But in interweaving a snapshot overview of Perry’s life alongside her sprawling, international “California Dreams” tour, with its seven tour buses and 16 trucks — and in having the sad, dumb luck of also catching refracted glimpses of the rise and fall of her marriage to comedian Russell Brand — the movie achieves something few docs of its ilk have been able to do: it presents its subject as a fairly regular, hard-working girl, just trying to figure it out. 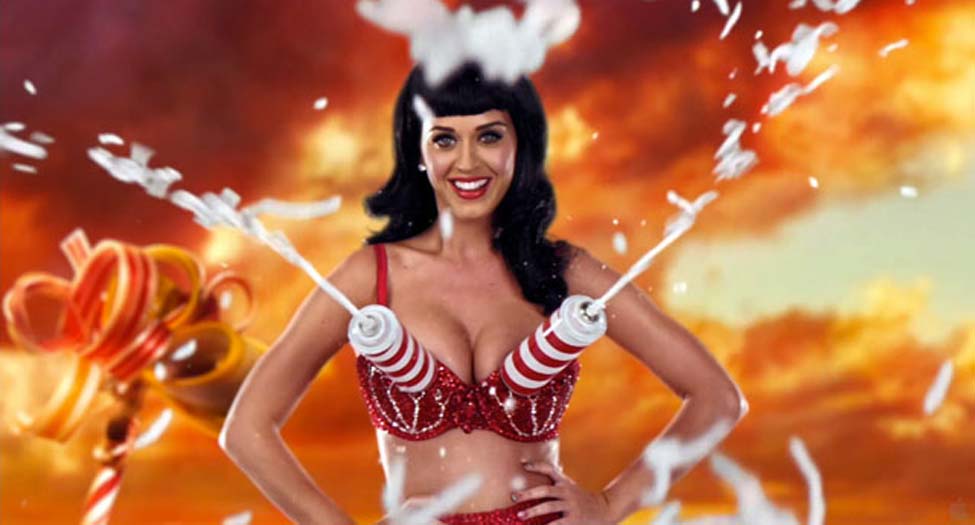 In addition to Perry herself, interviewees include co-managers Bradford Cobb Steve Jensen, assistant Tamra Natasin (who even has her own group of chirping sub-fans), and other assorted stylists and designers to whom Perry has shown steady loyalty, it is asserted. Early on, Perry’s shared insights and motivations aren’t exactly the stuff of amazing depth (“My goal playing shows,” she says, “is super-simple — to make people smile and have, like, a heart full of hope and happiness”). But as it progresses, a more full-bodied portrait emerges of Perry’s traveling-preacher parents and the strict Christian upbringing they imposed upon their kids. Says Perry’s younger brother, “We weren’t allowed to eat Lucky Charms because luck is of Lucifer.”

Apparently videocameras were totally fine, however, since there’s an enormous amount of footage of Perry as a kid (she got into singing and songwriting at age 13, and released a gospel album at age 15) and, most importantly, as an 18-year-old, where she chats openly about feeling as if the choice of thinking for herself and forming her own opinions was often taken away from her in adolescence. Yes, poppy and peppy musical numbers are scattered throughout “Part of Me,” including the titular anthem of self-empowerment, but it’s these informative glimpses behind the family curtain that form the true spine of co-directors Dan Cutforth and Jane Lipsitz’s work, and give it a relatability.

Well, that and the other human moments, including fun with a fart soundboard, wherein Perry labels passing gas a “heinie hiccup.” The movie touches on her unraveling marriage and divorce tenderly and obliquely, and there’s something undeniably odd and sadomasochistic about signing off on filming private breakdowns — as is the case when Perry is in a state of depression and tears moments before an overseas concert and then pivots by squaring her jaw and dramatically telling her make-up artist, “Start, Todd” — but it’s still a bit affecting, no matter how posed. Moving too, is a tender performance of “The One That Got Away,” a song clearly informed by her relationship woes and subsequent reflection. In the end, “Part of Me” is just that — part of Perry. It doesn’t dig down into her creative process very substantively, or successfully. But it does provide a multi-dimensional look at her as a real person, and that’s no small achievement.

“Katy Perry: Part of Me” comes to home video in a Blu-ray/DVD combo pack, inclusive of a digital cop of the film, with a cover that touts the movie’s CinemaScore and certified-fresh status on Rotten Tomatoes. The 1080p high definition Blu-ray transfer of the film is definitely the best way to experience it, along with the DTS-HD 5.1 master audio track. It’s split into 18 chapters, and pressing either the home or top disc menu during playback will pull up a horizontal options bar on the bottom rather than kicking a viewer back to the main menu.

Bonus features consist of full concert performances of the tunes “Waking Up in Vegas” and “Last Friday Night,” plus a clutch of little featurettes. One, at six minutes, focuses on Perry’s relationship with her 90-year-old grandmother, and includes extra footage of her stopping by to visit the day of her Las Vegas show. Sharing more family anecdotes, Perry’s grandmother also suggests a different-shaped bottle for Perry’s perfume, since as is “it turns over too easy.” Another tidbit, clocking in at five minutes, showcases Perry’s rehearsal preparations for her Grammy performance this year, with more allusions to her split from Brand (“I want to show that I’m a victor, not a victim”); lacking rights to the actual clip, however, makes this laudatory build-up to such an “amazing” moment a bit strange. A half dozen other behind-the-scenes featurettes, each running around three to seven minutes, include Perry bumping into and being praised by various other celebrities (David Hasselhoff, Elle Fanning, Justin Bieber); working with dancers while invoking Steve Urkel in an assessment of her own abilities; and getting “California Dreams” ankle tattoos with her assistant and some other tour friends. These are fun little bits — and heck, her 58-year-old co-manager, Jensen, even submits to one, so caught up in the dream is he. 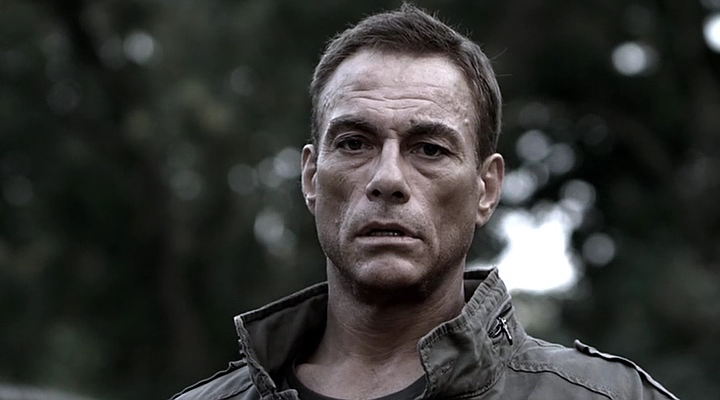 One wouldn’t have necessarily guessed it years ago, but age has treated Jean-Claude Van Damme surprisingly well. If there was any lingering doubt from those who perhaps failed to see “JCVD,” the new-to-DVD “6 Bullets” proves the “Muscles from Brussels” has feelings as well. A bruising yet somewhat contemplative action flick, the film benefits from the star’s continued collaboration with director Ernie Barbarash. “6 Bullets” doesn’t skimp on the action, but it plugs into and plumbs real-world issues, and feels all the more rooted and substantive for it.

The story follows retired veteran mercenary Samson Gaul (Van Damme), pyschologically wounded from the collateral damage deaths wrought by one of his rescue missions gone wrong. Samson is content wallowing in his own mistery until he gets sucked into a kidnapping case, somewhat against his will, involving the daughter of mixed martial artist Andrew Fayden (Joe Flanigan, of TV’s “Stargate: Atlantis”). Barbarash’s action directing is just so-so, but he cedes rhythmic control of the more characteristically slam-bang-paced action theatrics to Van Damme, as well as Chad and Evan Law’s script (the movie clocks in at 115 minutes), and the result pleasingly allows for something more ruminative. Unfortunately, apart from a clutch of trailers for other Sony releases, there are no supplemental bonus features on this 1.78:1 anamorphic widescreen disc, which doesn’t go a long way toward alleviating the perception of it as a retread title. 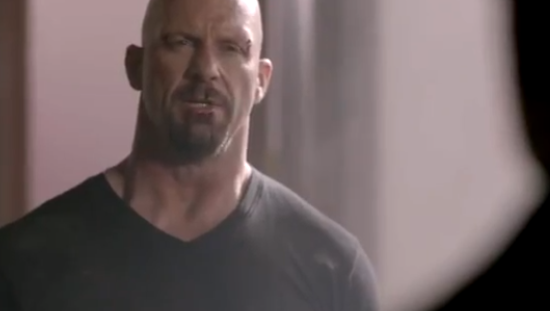 In other aging action star home video news, “The Package” concocts an excuse for both Dolph Lundgren and Steve Austin to appear together on screen, against a ticking-clock backdrop of cracked skulls. The former is a mysterious international crime lord, known only as “The German,” while Austin stars as Tommy Wick, a Seattle bouncer and part-time enforcer who agrees to deliver a parcel for local crime boss Big Doug (Eric Keenleyside) in an effort to settle a debt for his brother Eddie (Lochlyn Munroe). When word of the clandestine delivery spreads, however, both Tommy and his bundle become targets for a ruthless rival gang leader, Anthony (Michael Daingerfield).

Part “Contraband,” part “The Transporter,” director Jesse Johnson’s movie benefits from a streamlined, square-jawed sense of purpose, and the good sense to let its stars do what they do best without asking too much outside of their respective comfort zones from them. Arriving on Blu-ray/DVD combo pack, “The Package” comes presented on the former format in 1.78:1 1080p, with a Dolby TrueHD 5.1 audio mix. 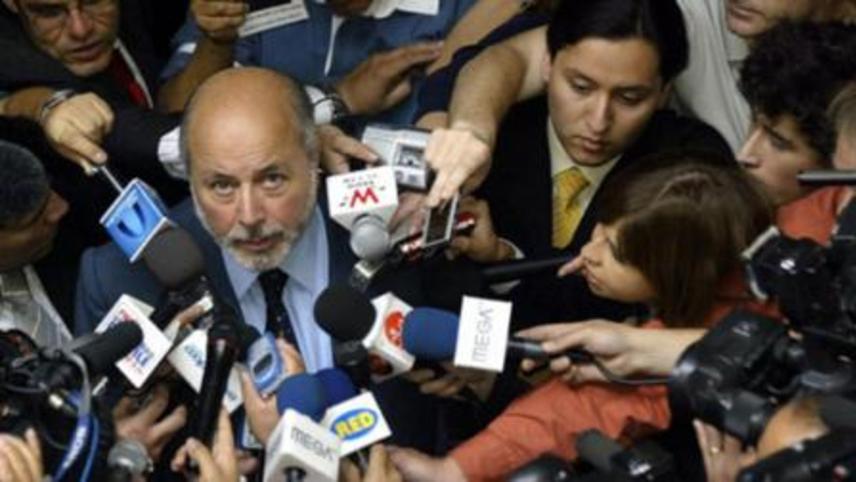 On the documentary front, meanwhile, legendary Chilean filmmaker Patricio Guzman shines a light on former dictator Augusto Pinochet in “The Pinochet Case,” a stirring look at the dramatic 1998 arrest of the former dictator while in London after a Spanish judge issued a warrant charging him with torture and other human rights violations against Spanish citizens. Buoyed by intense personal testimony that underscores the dictator’s crimes at home, this intellectually engaging movie asks tough questions about both the rule of law and statute of limitations as it applies to leaders of government. Housed in a regular plastic Amaray case, “The Pinochet Case” comes to DVD presented in a 16×9 aspect ratio, with an English language Dolby stereo 2.0 audio track. Under a static menu screen, the movie is divided into 18 chapters. There are unfortunately no supplemental bonus features other than a text screen touting distributor Icarus Films’ eponymous website.