The ghost of Christopher Dorner, the former Los Angeles police officer who held the imaginations of television news producers captive for a week several weeks ago when he went on a rampgage, shooting several cops and their family members as part of a twisted statement of grievance, hangs over “The Kill Hole,” a well meaning indie drama of post-traumatic stress disorder and ex-military account-settling. Despite a fairly convincing evocation of mood by writer-director Mischa Webley, this spare yet affected tale never ripens past the point of a wobbly character study. It’s a half-developed Polaroid, and as such an artful yet shrug-inducing time-whiler.

“The Kill Hole” centers around Samuel Drake (Chadwick Boseman, who portrays Jackie Robinson in the forthcoming “42”), a former Army lieutenant and Afghanistan War mercenary turned Stateside taxi driver in small town Pacific Northwest. Haunted by his complicity in war crimes, Drake is contacted by a couple of higher-ups from his former contractor, who apprise him of a witness out to touch the lives of those he viewed from afar. That man is Devon Carter (Tory Kittles, channeling a bit of Denzel Washington), an ex-sergeant and sniper who’s had a break from reality and now lives survivalist-style in the woods, with weapons and a big conspiracy flow chart with photos and things like “Think, think, think, think!” actually written on it. The choice put to Drake is simple — erase Devon, this “loose strand,” or face consequences himself.

“The Kill Hole” has nice production value that makes superlative use of its natural surroundings. And Webley has an obvious sensitivity to his characters, which informs the movie’s unhurried rhythms. But he saddles his film with desultory flashbacks and poetry-laden voiceover (“This world’s got a darkness to it, a nasty stench that follows it around…”), and the little action that does take place — in the form of a cat-and-mouse sequence with Drake and Carter — is dreadfully staged and edited, so that basic physical positions are unclear.

In fact, apart from a bit of ridiculously confrontational and on-the-nose drama (a businessman fare of Drake’s tells him, upon allegedly closing a $2 million deal on the phone in the back of his cab, that it makes him feel like he can “buy [him]”), much of “The Kill Hole” comes across as a wavering tone poem. Group therapy sessions presided over by Marshall (Billy Zane) seem like a social contract sop — included for balance but not tremendously informing Drake’s character. And Carter’s pitch to Drake — to join him in a score-settling killing spree of indeterminate focus — never amounts to much more than a weird diversion.

Equally if differently damaged, the two characters are meant to be sort of straw-man psychological stand-ins for the inwardly reflected horrors of war. But “The Kill Hole” doesn’t convincingly flesh them out. If Kittles’ turn comes across as overly mannered, Boseman — who possesses hints of Chiwetel Ejiofor’s quiet charisma — is a more worthy anchor. Even he, however, can’t pull the entire film out of its hole.

NOTE: For more information, visit the film’s website at www.TheKillHoleMovie.com. 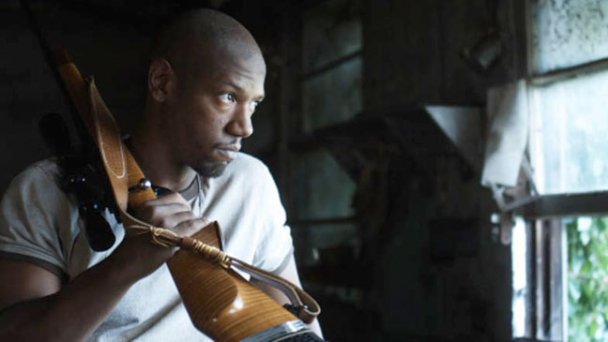