“K-11” is so named for the Los Angeles County Jail holding section in which it unfolds — a special lesbian, gay and transgendered unit nominally under the thumb of Gerald Johnson (DB Sweeney, sporting a Junior Hitler ‘stache-and-haircut combo), a corrupt lieutenant with a nose for both the cocaine and S&M kink peddled by the troop’s real leaders — inmates Ben (Jason Mewes) and Mousey (Kate Del Castillo), respectively. When a drugged-out businessman facing a murder charge, Raymond Saxx (Goran Visnjic), is hauled in seemingly as Johnson’s newest sex toy, he finds himself struggling to fit in and stay safe amongst this collection of oddballs and misfits, including the voluble and violent transgendered Mousey, child molester Detroit (Tiny Lister) and the spritely Butterfly (Portia Doubleday, the movie’s bright spot).

In his “Hollywood Reporter” review from its Turin Film Festival premiere, Stephen Dalton characterized “K-11” as feeling like “a deranged John Waters remake of ‘The Shawshank Redemption,'” but a Lee Daniels re-imagination of a gender-indiscriminate “Girl, Interrupted” might be another appropriate shorthand descriptor of the movie’s looniness.

“K-11” seems to unfold in some sort of supra-legal, “One Flew Over the Cuckoo’s Nest” dinner theater fever dream. Inmates may truly have power in jails, but all the characters here feel like they’re voluntary camp attendees, just hanging out (a cheap, barracks-style set with bunk beds doesn’t help matters). It’s an hour into proceedings before there’s any sort of real mention of a lawyer, for anyone. Then, after an indulgent spread of theatrics and loose threats, the story hinges on a character arbitrarily changing their personality, and partnering on a revenge scheme that aims to give “K-11” some punch of comeuppance, but in reality plays just like a shallow chord variation on the same batshit insane bass line of the film.

Former script supervisor Stewart, working from a first-draft-y screenplay co-written with Jared Kurt, throws in lots of declamatory dialogue (“Yes, I am that bitch — the Mouse is back!”) in an attempt to cover up superficial characterizations. There’s no core point or even a unifying tone to her cinematic caterwauling, however. Visnjic’s more restrained performance stands in stark contrast to the rest of the movie’s lurid depictions, and any viewer identification with his weird plight — a quickie divorce extortion which apparently abdicates the rights or responsibilities of a district attorney to actually file criminal charges — is only an attempt to glom onto some form of lucidity and sanity in this otherwise frenzied mess.

NOTE: In addition to its fifteen-city theatrical engagements including the Laemmle NoHo 7 in Los Angeles and the Cinema Village Theater in New York City, “K-11” is also available day-and-date across VOD platforms. For more information, visit its Facebook page at /K11TheFilm or its website at www.K11TheMovie.com. 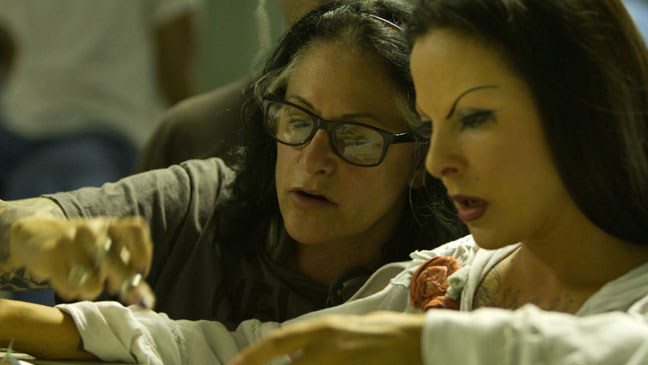