In the movie’s most incredible magic act, the title figure and his partner make their entire theater audience disappear. Amazing as it may sound, magicians Burt Wonderstone (Steve Carell) and Anton Marvelon (Steve Buscemi), promise hundreds of people seated in the theater that they will disappear and, lo, moments later the entire contingent is outside on the lawn! Happily, the team, together with partner Jane (Olivia Wilde), let us in on how this is done in the story’s final scene, but one thing you can count on: nobody in the movie theaters around the country are going to leave their seats and disappear before this film is over. That’s how funny and even riveting this partly sentimental, partly ha-ha funny and even darkly-humorous Don Scardino’s movie is. Scardino, known for TVs “30 Rock” for five seasons and TV episodes of “The West Wing,” “Law & Order” and “Two Broke Girls” among other features, evokes crackerjack performances from the entire cast, all appearing to have great fun and perhaps wondering how they manage to get paid for doing what they love.

With a script by four writers—in this case not a warning sign that a committee-written story will be bland—Scardino takes us to Las Vegas, with later film taking place in Los Angeles, but first we get insight into what made Burt a magician. He (played as a kid by Mason Cook) and his only friend, Anton Marvelon (played by Luke Vanek), are too nerdy to be liked by the popular guys in the ‘burbs, but they bond over a magic set designed by Rance Holloway (Alan Arkin—shown in the set’s video looking a quarter- century younger, a tribute to the make-up department). Fast forward many years later, they’re a team that alternate wisecracks with some neat tricks, anything from manipulating a deck of cards to performing an “execution” by hanging.

Their act is being undermined by a rival, Steve Gray (Jim Carrey), who attracts a younger demographic with such numbers as not only walking across a bed of coals but lying on them for an entire night, and ultimately by drilling a hole in his head, allegedly through the one angle that does not destroy the brain. (This does not turn out too well.) He’s more a gross-out than a prestidigitator, but that seems what the new audience wants according to Doug Munny (James Gandolfini), a developer who owns glitzy casinos and who announces a version of a reality show by promising a five-year contract to whichever magician can wow the audience more.

Some cute and effective throwaway lines include one by Burt to his groupies who must sign a pledge in his bedroom that they are over 18 and a release form to disallow lawsuits. Jim Carrey takes on a comparatively brief side role, still using his basic shtick of making statements with suspenseful, breathtaking pauses, Olivia Wilde does fine as the team’s not-so-loyal assistant, but Steve Carell is at the top of his form in what is perhaps his most flamboyant role, one that offers stark contrast to his performance as a marriage counselor in David Frankel’s “Hope Springs” and, of course, his dryly humorous role in TVs “The Office.” As for how that Yorkie pup got into his pants, you’ll have to see the movie several times to figure that out. 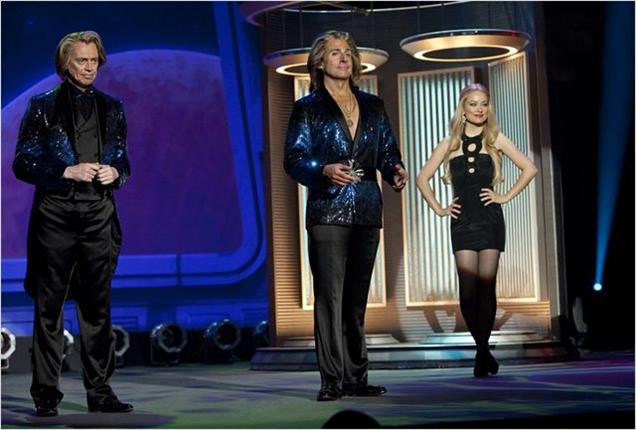