Rap And Surprise Guests Shake Up Episode 10 Of Burning Love

The second season of hilarious dating game spoof “Burning Love” is still going strong and Episode 10 is now online at Yahoo! The new episode is just as ridiculous as the rest of them (in a good way) an it involves rap:

“A rap legend blesses the mansion with his presence to help Julie determine who is the illest of the guys. Another surprise visitor shakes up the game.”

Make sure to check out the episode at screen.yahoo.com and if you need to catch up on Season One, the episodes are airing on E! every Monday at 10/9c. Here’s more about the second season of “Burning Love,” in which it’s time for a woman’s chance at finding love:

“Spurned Dental Hygienist, Julie Gristlewhite, returns to the Burning Love Mansion, where she tried and failed to win Mark Orlando’s heart. She’s hoping to meet her future husband in a group of eligible bachelors that includes: a Single Dad, a Prince, a Party Guy and a Jew.”

The show stars June Diane Raphael as Julie and Michael Ian Black as the host, Chris Harrison. What do you think about the second season of “Burning Love”? Give your opinions in the comments section below. 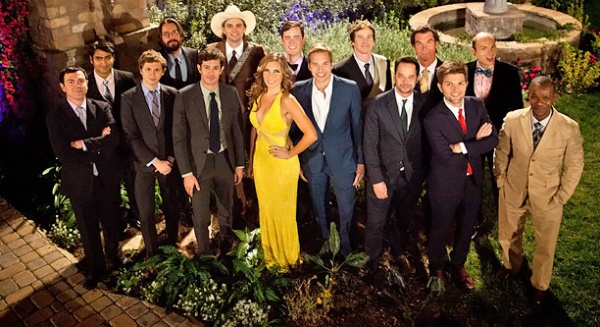