Title: If I Were You

An odd little duck of a film, writer-director Joan Carr-Wiggin’s “If I Were You” kicks around enjoyably for quite a while in the same sandbox as some of Woody Allen’s mid-career farces, before eventually pivoting and skipping off into less rewarding territory. The story of a woman who accidentally learns of her husband’s infidelity and then enters into a strange friendship and pact with his unwitting mistress, this bouncy but meandering comedy would benefit from an editorial haircut that trims down some of its less inspired subplots.

It’s a shock for New York City focus group and marketing manager Madelyn Reid (Marcia Gay Harden) when she stumbles across her husband Paul (Joseph Kell) one afternoon in a restaurant, in a lover’s clinch with his mistress. When he gets nervous and scampers off after an exploratory phone call from her, the young woman, a would-be actress named Lucy (Leonor Watling), is despondent and hysterical. Madelyn follows her back to her apartment, where she foils a bungled suicide attempt. When her unsuspecting rival opens up to her, Madelyn at first sees an opportunity to seize the upper hand. But Lucy, stressing their shared unhappiness, suggests that they start making choices for one another (“The way to fix our lives is to stop making our own decisions!”). Madelyn slowly accedes, and trips into a contemporized production of “King Lear” when she accompanies Lucy (who is cast as the Fool) to an audition. Hijinks ensue, wouldn’t you know — with Madeyln lying to Paul about an affair she’s not having, Paul getting jealous about a co-worker of Madelyn’s whom he believes to be the offending cuckolder, and a handsome and affable stranger, Derek (Aidan Quinn), popping up at a moment of crisis.

It’s not merely the introduction of the “King Lear” gambit that makes “If I Were You” easy to imagine as a stageplay; it’s a fairly hermetic story, with lots of talky one-on-one or small couples scenes. This tack works for a while, but a sense of claustrophobia eventually sets in, aided by the movie’s lack of compelling visual vocabulary. It’s a low-budget offering, understandably, but Carr-Wiggin and cinematographer Bruce Worrall deliver a flat telling, and Aidan Leroux and Sean Breaugh’s spare production design offers little by way of distinguishing features. The “Lear” production — never the strongest part of the story anyway — suffers from a complete lack of discussion about its staging; basically it just seems like a staged reading, where people wear what they wish, and walk around.

This basic lack of attention to filmmaking detail dings “If I Were You,” and puts the wind-flaps down on its abundant early charms, which are built largely around the amusing interplay of the distraught, distracted Harden and the deliciously flighty, simple-minded Watling. Similarly, several subplots — including one with married co-worker Keith (Gary Piquer), who’s enthusiastic about Paul’s infidelity, figuring it opens up the door for he and Madelyn to have a fling — aren’t as amusing as Carr-Wiggin imagines them to be. A tighter focus, and re-imagination of the piece as basically a three-hander, would have given it greater pay-off.

But just when one is ready to write “If I Were You” off, along comes a scene like the one Madelyn and Derek share, where they first meet after each losing parents. It’s raw, darkly funny and quietly charged — a wonderful showcase scene between Harden and Quinn. There are moments like this sprinkled throughout the film, and they make “If I Were You” worth a look, at least for fans of the talent involved or indie comedies of existential crisis more broadly. 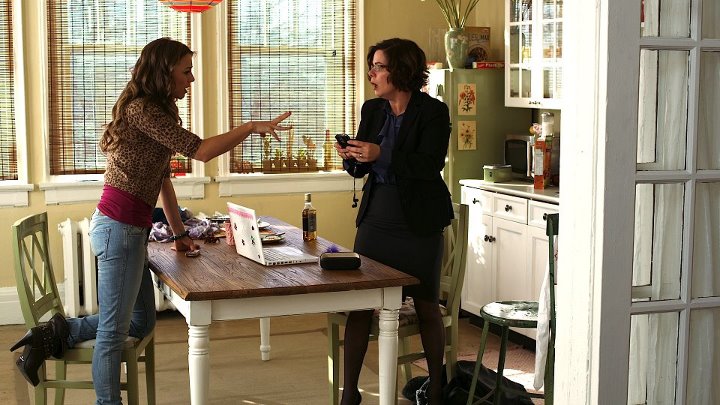 Cancel reply
Interview: Aaron Eckhart Talks About His Role In Olympus Has Fallen
The Call Movie Review
To Top