Proof of the old axiom about most of a film’s success laying in its casting can be found on rich display in “Admission,” a pleasant, airy adaptation of Jean Hanff Korelitz’s same-named novel about a frazzled college admissions officer who finds both complication and unlikely happiness in a rebound relationship. Topliners Tina Fey and Paul Rudd anchor this amiable yet somewhat insubstantial romantic dramedy — a movie whose sins chiefly seem to be of skittish insecurity and misguided omission rather than actual execution. No mind, however: fans of the two actors, and in particular older white-collar females, should forgive and swoon suitably, at least to temporary effect.

John’s star pupil is Jeremiah Balakian (Nat Wolff), a prodigy who’s nonetheless washed out of high school due to difficulties with traditional instruction. John’s passionate advocating for Jeremiah — and passion in general — makes an impression of Portia, who feels the ethical pinch of her sincere recommendation and less defensible rule-bending for Jeremiah when she and John fumble awkwardly toward a potential relationship. Further complicating matters is John’s belief that Jeremiah might actually be the son Portia gave up for adoption in college.

In its mixture of tones and somewhat blinkered protagonist, “Admission” bears a bit of resemblance to 2002’s “About a Boy,” which is perhaps unsurprising given that the two movies also share a director — Paul Weitz, who co-helmed the latter with his brother Chris. “About a Boy,” though, was more comfortable trading in both melancholy and bitterness; “Admission,” by contrast, often pulls its punches. The film would seem to offer up a complex mixture of drama and laughs, but while screenwriter Karen Croner laudably doesn’t opt for too many shtick-y slapstick bits or forced set pieces (the one notable exception involving the birth of a calf, not in the book), neither does she fully plumb the material for all its emotive worth. Similarly, while the backdrop of academia is certainly a fresh one, it’s not fully exploited and explored; it feels pat, and two-dimensional.

The idea, clearly, was to graft Fey’s “30 Rock” Liz Lemon character and nascent big screen persona — that of the exasperated, over-extended white collar modern woman trying to juggle it all — onto this story, opposite the winsome, appealing Rudd, and make it a nice little two-hander with lots of colorful trimmings. And indeed, Portia makes like Chumbawamba’s “Tubthumping,” offering up zingers as she gets knocked down, but then gets up again.

Given the freshness of its conceit, however, a more interesting story could and should have tracked more closely with the slightly more nuanced novel, which took confusion and ambivalence as its fuel. As is, Portia’s complicated relationship with her headstrong, free-spirited mother (Lily Tomlin) only rates about a third or half of the attention it merits. “Admission” is still fun, because the cast is so charming. But it could have had the pinch of something like “Sideways” — a comedy laced with real pathos — if only it had been braver, and more courageous. 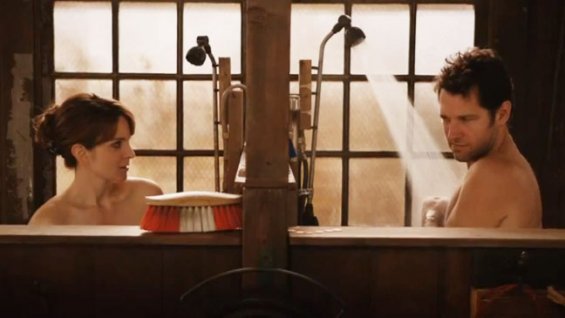