My adoration for music began with and continues to be rooted in artists who started their careers decades ago. These “older” talents are undeniably more seasoned than bands of the 2000s and do not over publicize themselves to garner fame. It’s simply about the music and not their latest Facebook, Twitter or Instagram updates. Music is not their quick path to celebrity status; it is their lifelong career.

A prime example of a musician who made the commitment years ago is Chris Wyse. Named a full-time member of The Cult in 2006, Wyse has a resume many musicians dream to obtain. The singer, songwriter, bassist and producer has resounded through recordings from the likes of The Cult, Ozzy Osbourne, Mick Jagger and Tal Bachman.

In 2009, Wyse added a new project to his repertoire, the vocalist and bassist of the Los Angeles-based rock band, Owl, which also consists of drummer, Dan Dinsmore and guitarist and vocalist, Jason Achilles Mezilis. The trio released their self-titled debut in 2009 and will be dropping their sophomore album, “The Right Thing” on April 9th via Overit Records. Featuring a cover of The Kinks’ “Destroyer”, “The Right Thing” utilizes the elasticity of the rock genre, which positively deems the self-produced release to be an eclectic album imploding with several music stylings.

Check out the interview below with Wyse as he discusses everything Owl, the monumental points in his career, his influences and what he would be doing if he wasn’t a story of success in the music industry.
For more information on Owl, head on over to band’s official site.

You’ve had a career in the music industry that spans over decades. What advice would you give to upcoming artists who seek a similar lengthy career?

The main thing is having a genuine love for it and passion for it. If it is something where you are just trying to get attention, I don’t think you can have longevity; I think you’ll have a flash.

For me, I see it as a lifetime thing, being an artist and a songwriter. I am always working on being a more creative and better bass player. I am always looking to better myself. Just because we could have had the greatest show last night that was last night and we need to move on. What are you going to do right now? It’s not really reveling in your victories as much as it is to have a long career. You just realize there are little things and big things and you just do it all.

How do you think your experience in The Cult and working with artists like Ozzy Osbourne and Mick Jagger have influenced the sound of Owl? Or do you treat these projects separately?

We are human and I am definitely influenced by artists, who got me into it. Ian and Billy from The Cult have had a huge impact on me and taught me a lot. I sing background vocals with The Cult every night live, so I am working with Ian making sounds. In Owl, I sound like me. I just sing, but in The Cult, I have to be conscious of what Ian does. I don’t think you can help but be influenced by someone you are singing with every night. I would say they taught me to not only focus on what I do well, but also to learn to expand and get some of that post punk influence they have.

I wrote the song “Pusher” with Marti Fredriksen, after I did the Ozzy record. I felt that I was kind of influenced by him. I was around him all the time. I think you can even hear it in the song. I admit I have influences. These people have all influenced me.

As a bassist, do you think your instrumental styling is different amongst your projects? How do you “cater” to each band?

Yes, at the end of the day I am still doing things that are unique to me. For example with The Cult, we are always going to playing “She Sells Sanctuary”. There is no doubt about it. Basically that song has a triumph and victory about it and you have to really understand that. I just think that with my playing it, my sound has an energy about it. Just playing that one note with your own feel. Like Mick can sing a song and then some other guy down the road at a blues bar can sing the same song, but there is a big difference. So, it doesn’t have to be that I am blending in there and bassin’ out all over the place with riffs and notes. It can just be that I have my feel and my tone.

Even if I am adding some more stuff with the bass or movement or notes, it’s still about the songs. Some of the songs in The Cult, I didn’t have anything to do with. I think you have to be sensitive with what you are playing, but ultimately, a very simple answer would be “yes”. I believe I still have an affect. It’s about being sensitive, but also taking the moments.

How do you think Owl’s sophomore release, “The Right Thing”, instrumentally and lyrically differs form your self-titled debut in 2009?

First of all, the first record I kind of had in my back pocket for a while and I really worked on the songs. It had a very specific thing that I was getting from the guys, which was probably challenging for them. I remember talking to Dan about the feel of a song and as the producer literally jumping around the studio in front of Dan while he is doing the drum tracks and trying to get him to be the most crazy animalistic tribal monster person we could create. I was doing a lot getting out of these guys the vision I had in my head.

So with this record, a lot of great things happened, but I didn’t say anything. We really just jammed. We would be like, “Oh my god, where did that melody come from. Oh my god, look at that riff.” It was a really fun experience. We finished this record together.

What’s the meaning behind the album title?

“The Right Thing” is a really emotive song. We’ve got banshees screaming in it. It’s mysterious and there is more a Morrison-esque tone to it. It’s low and deep. I like the more diminished chords in it. Hopefully, it makes you question yourself and things, but that doesn’t mean negative stuff. At the end of the day, all this stuff is supposed to be positive and that’s why we do it. Asking the right questions and asking if things are right is the best thing to do for change and to grow.

You’ve discussed the meaning behind the song, “Perfect”, in previous interviews.

You remember the movie, “It’s A Wonderful Life”? The Christmas movie? The story of the man who’s on the bridge and the angel comes and talks him out of it by giving him some perspective. I think that that’s kind of the answer to be what “Perfect” is. You get a glimpse into his life and how much he really has. It’s good to just stop and smell the roses and coffee and that’s what “Perfect” really does. It’s your simple stuff, sitting with your family and some of your best friends and not getting caught up chasing other stuff. It’s about appreciating things while you have them.

Why did you guys choose to cover The Kinks’ “Destroyer”? How did you make it your own?

Well, Dan our drummer is a big Kinks’ fan. Jason and I were a little taken back by his request of “On this record, we got to do a cover.” I’m like, “Okay, but I don’t know what.” He goes, “I know. It’s a Kinks’ song, “Destroyer.” The interesting thing is that Dan was adamant. So, Jason and I were like, “We got to do this or Dan is not going to stop” [Laughs]. We did it and to our surprise, it turned out to be one of my favorite things we have ever done. I’m really happy about Dan pushing us to do that song now. I think it’s great to satisfy Dan with something he grew up with. It was fun for us too. The track just really popped once we did.

Any other favorites off the album?

“Destroyer” and “The Right Thing” was our focus, but the album has got so many songs, like you mentioned, “Perfect”. Anybody could listen to “Perfect”. I don’t care who you are. Lately, I have been liking the song, “Give”. There is a lot of interesting stuff going on in that song. It has got really strong melodies, but I think there is something that captures a real mood. “Give” captures the most emotion for me on the record.

As a musician, singer, songwriter and producer, do you enjoy one of these professions the most?
I think I enjoy them all pretty equally. I think I enjoy having all of them the most. So, the answer to your question is kind of tricky for me. The one thing I realized that I enjoy the most is being in the studio as a producer, but what I think is cool about Owl is that the album was really produced by Owl, even though I was at the helm of the production. It was balanced. I don’t know if I could do it with every band and be the producer, the singer and the bassist, but these guys sort of give me balance so I can do that job. It’s unique to Owl.

Do you listen to any current music?

I’m really digging Vintage Trouble. They are like a rhythm and blues basic. I don’t want to say basic in a bad way, but rhythm and blues is really that strong fundamental basic stuff. Those guys put a new spin on it. Their energy is just great. I was actually at the Jimmy Kimmel show in the green room when they performed and thought it was really cool. It’s just real music and it’s rhythm and blues. It’s really unique to see such a neat band. I encourage everyone to check those guys out.

I am fan of them as well. If you weren’t in the music industry, what other career could you picture yourself doing?

I’d probably end up being an artist of sorts. I’d end up painting abstract things that have meaning to me. I think visually I would have gone off in some other direction. When I write, I have this sort of movie going on with pictures. When I am writing, I am chasing down a lot of visual stuff. Those are the things that inspire me and help me change my sound. 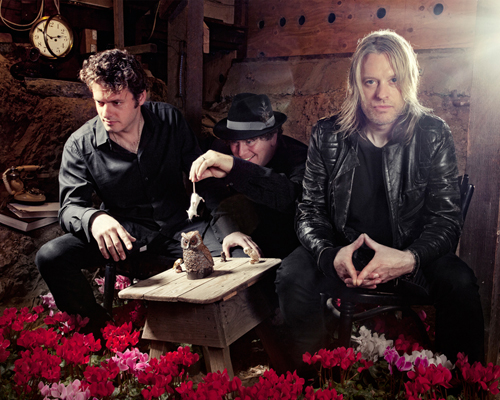