Saddled with a terrible, clunky title and a programmatic narrative that represents a fairly unpersuasive blend of the familiar and contrived, Los Angeles-set indie romantic comedy “Dorfman in Love” connects most fitfully as a vehicle for the charms of star Sara Rue. Penned by Wendy Kout and directed by Bradley Leong, the big-hearted movie is a sort of “Bridget Jones’s Diary” by way of “(500) Days of Summer,” though without the apexes of cleverness and flair found in those films. It’s charming enough in spots, but doesn’t overwhelm in execution or insight.

Rue stars as Deborah Dorfman, an accountant and single, Jewish San Fernando Valley girl who works with her brother Daniel (Jonathan Chase), constantly picking up his slack. She also takes care of her widowed dad Burt (Elliott Gould), who’s still in a funk over the death of his wife over a year ago. Deborah’s long-time crush, her Daniel Cleaver, is Jay (Johann Urb), a dashing and adventurous reporter who seems not entirely close-minded to the idea of something with her. When he gets summoned away on assignment, Deborah offers to cat-sit at Jay’s new, as-of-yet undecorated downtown loft for a week-plus, figuring she’ll fix it up to wow him and win him over.

Downtown Los Angeles in like another world to Deborah, who’s both frazzled and exhilarated by the change. While trying to juggle and manage the needs and wants of the other men in her life, her brother and dad, she opts for a makeover and also meets painter Winston “Cookie” Cooke (Haaz Sleiman), which causes Deborah to have to reevaluate the nature of her obsession with Jay.

“Dorfman in Love” is a somewhat weird title for a movie that essentially isn’t a fully committed, romantic two-hander. (The original title, still on the credits, was simply “Dorfman,” which is even worse.) The film is essentially a generous, slightly fizzy character study of a woman on the verge — though on the verge of what exactly even she isn’t sure. What gives the movie its pop, though, is its grey linings, and the fact that Rue’s winning performance is rimmed with a relatable sadness and vulnerability. Deborah is a one-time big girl who’s extraordinarily professionally competent, but still carries around feelings of unworthiness, and still misses her mom. Some of the rest of the acting is uneven, but Rue is simply great — engaging, and really tuned into the tiny, faultline behavioral consequences that years of a father’s sex-based favoritism can breed.

Yet Kout and Leong don’t allow Deborah (or anyone else) to truly fall apart. Most of the movie charts Deborah’s blossoming self-confidence, so sunniness is the order of the day. But even when Daniel cheats on his wife Leann (Keri Lynn Pratt), the infidelity is treated as but a hiccup — the impetus for a couple dramatic scenes, but nothing to leave a mark. It’s hard knocks, perhaps, to ding a putative comedy for not being more of a drama, but that’s where most of “Dorfman in Love”‘s best moments lay — far less in any would-be romance, which unfolds with a yawn, but instead in its subject’s sometimes bumbling and sometimes self-effacing attempts to fully embrace the realization that she has a right to pursue her own happiness.

NOTE: For more information on the movie, visit www.DorfmanInLove.com. 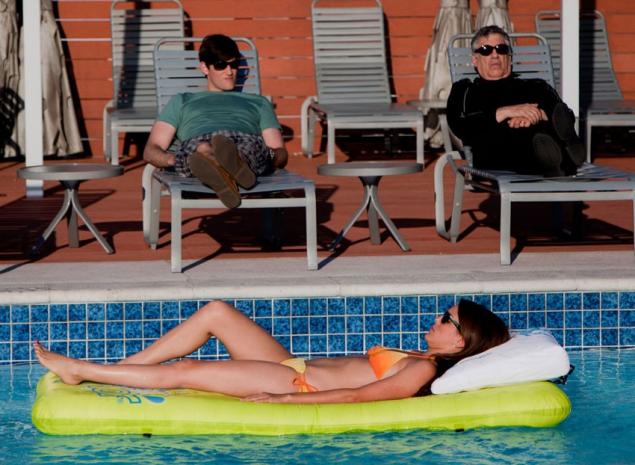