Much like mankind, The Croods starts out slow and very basic. Aside from the cinematography, which places the audience in a respective characters’ point-of-view from time-to-time, you kind of just hunker down and prepare for a generic and/or fundamental 98 minute 3D animation. But then, a spark turns into a blazing visual fire.

Though not as sharp as say Avatar, the CGI animators created a vibrant landscape populated with unusual creatures for the caveman family to interact with. Granted, nothing truly substantial comes from the dialogue until the out-of-nowhere borderline tear-jerking climax, but the human personas are unique and lively, much like the performers who breathe life into them.

Grug (voiced by Nicholas Cage) is the patriarch of the Croods. They are seemingly the last human survivors on a predominantly dry and mountainous region. His attentive wife Ugga (voiced by Catherine Keener), clumsy son Thunk (voiced by Clark Duke), rabid dog-like baby girl Sandy (voiced by Randy Thom), and grumpy mother-in-law Gran (voiced by Cloris Leachman) all follow his instructions in order to endure the dangerous times (attacks from eclectic animals); which usually means hide in the cave. And while this tactic has always worked, his oldest and adventurous daughter, Eep (voiced by Emma Stone), can’t stand this way of life. She hates being all cooped up in the cave and yearns to explore what’s beyond their standard area.

Naturally, she ventures out and crosses path with the crafty, Guy (voiced by Ryan Reynolds). He seems to know, or have a sense, that the world is changing (continental land shift) and spins stories about riding the sun to a safe place. Eep is all-in but once her father meets the charismatic guy, and his pet Belt (literally acts as his belt and looks like some sort of monkey), he doesn’t like him questioning his authority and urging the family to leave the proximity of the cave.

Yet they do, and an adventure ensues through more colorful prehistoric realms.

This is physically clever and engaging. You could probably watch most of it on mute and still experience the same wholesome reactions and understand the plot. And while the action sequences are well-thought out and beautifully orchestrated, there isn’t a ton of mental stimulation occurring until the aforementioned climatic crossroad. Still, the energy the voice cast puts into their respective characters is contagious, even though the majority of adults won’t find this as humorous as the kiddies perhaps. 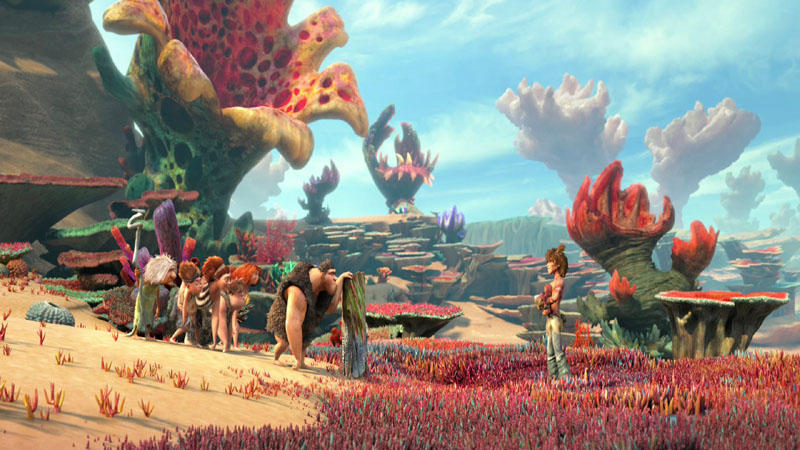