Title: The We and the I

Filmmaker Michel Gondry has always been a visionary of visual style, dating back to his groundbreaking work in the music video format. Less noted is his soft spot for underclass underdogs and those existing on the margins of society, as found in his features like “Be Kind Rewind” and “The Science of Sleep.” That predilection gets a more direct exercising in what may be Gondry’s most narratively straightforward and direct movie yet, which charts a city bus ride home for a group of New York high schoolers on the last day of class before summer break. The result, “The We and the I,” is the product of a two-year collaboration between Gondry and actual students at a Bronx after-school arts program, and it’s sort of like Laurent Cantent’s 2008 Palme d’Or winner “The Class” by way of Steven Soderbergh’s minor canon social-portrait riffs, like “Full Frontal” and “The Girlfriend Experience.” Marked by a flurry of adolescent energy, where kids can’t not talk for five seconds, the film works more as a caffeinated conveyance of feeling than an actual plotted story.

When the spring semester school bell rings for the last time, a motley crew of teenagers pile aboard and basically take over a city bus. The driver (Mia Lobo) occasionally attempts to enforce some discipline, but is also co-opted by free pizza, leaving other passengers to fend for themselves as the voluble kids gossip, gloat, brag and bully. What ensues is a litany of lover’s quarrels, clowning of old people, text messaging drama, “Sweet 16” party planning, games of truth-or-dare and general bickering, shining a light on rivalries, anxieties and friendships both true and perhaps significantly less so.

“The We and the I” has the potential to be like an emotionally combustible cross between “Kids” and the self-contained parts of “Speed,” but there’s a counterbalancing innocence to Gondry’s film — Young MC’s “Bust a Move” opens the movie, and other old-school hip hop flavors interstitial bits and editorial pivot points — and the violence that crops up never escalates past a certain point. There’s no charged threat of doom here, in other words, for both better and worse.

Instead, Gondry aims for an artful, scrambled blend of youthful connection and hormonally charged carousing (the reverie of a pretty girl on a bike passed by on the sidewalk is interrupted by an exclamation of, “Yo baby, nice tits!”). Cinematographer Alex Disenhof’s inventive camerawork and framing — sometimes incorporating telltale Gondry in-camera cross-cuts of stories being told — matches the inquisitive and boisterous nature of his subjects. The dialogue is sometimes funny (“The Dalai Lama says you gotta be fearless in matters of food as well as love — I have an email from my sister saying he said that”) and occasionally piercing and sad (“You three are the only ones that talk to me, and it’s never anything I wanna hear”), but mostly it’s less deeply insightful than just loud, jocular and unending — just like much real teenage conversation, in essence.

What the non-professional cast lacks in experience they for the most part make up for with raw, unfiltered charisma. But, in its third billed chapter, or act, when the movie pivots into a bit of moralizing payoff, the lack of formal training undercuts some of “The We and the I”‘s putative lessons learned. Still, an off-speed curveball with less inherent narrative appeal from Gondry is interesting in ways that dozens of more rigorously plotted films aren’t. Plot your route and purchase your fare accordingly. 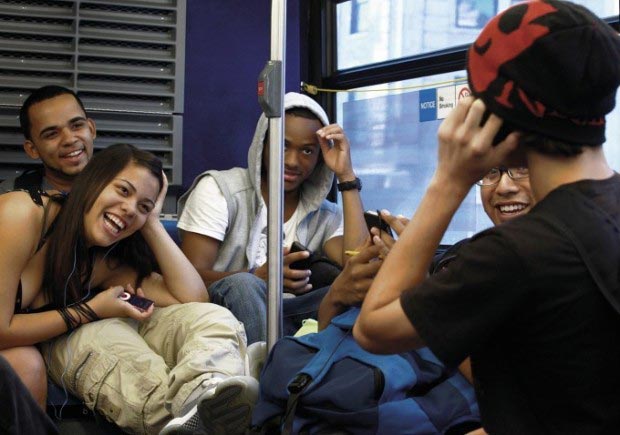