In 2004, writer-director Pablo Berger delivered an unlikely yet charming little Spanish-Danish comedic hybrid, “Torremolinos 73,” about an exasperated encyclopedia salesman who, along with his wife, accidentally trips into a career directing pornographic movies for import to Northern European countries. It took more than eight years for his totally different but equally unique follow-up, “Blancanieves,” the winner of 10 Goya Awards, the Spanish equivalent of the Academy Awards. (The film was also Spain’s official Best Foreign Language Film Oscar submission.) In a case of good news/bad news, though, Berger’s movie — a black-and-white silent film that re-imagines the tale of Snow White through the prism of bullfighting, while also serving as a homage to European silent movies of yore — comes on the heels of the Oscar-winning “The Artist.” Ergo, two of its most distinctive qualities risk looking, bizarrely, derivative. For ShockYa, Brent Simon recently had a chance to speak to Berger one-on-one, about the joint pain and opportunity that presents, as well as his inspiration for the movie. The conversation is excerpted below:

ShockYa: First off, to mix it up a bit, tell me about the process by which the film became Spain’s Best Foreign Language Film Oscar selection, and whether that was a surprise.

Pablo Berger: The selection is done by the Spanish Film Academy, which is a little more than a thousand members — writers, directors, actors, cinematographers and editors — and similar to what in America is the Academy of Motion Picture Arts and Sciences. In Spain we produce annually probably around 140 films, so first they select three films and from those finalists they vote again. We were selected. And for me it was fantastic, it was like that moment with Sally Field (from the Oscars), where she’s like, “They like me, they really like me!” You feel so accepted. It was my second film. After my first film was very well received I still felt like I had a long way to go. And now with this one I really feel that the industry supported the film — maybe because it’s an example of (great artisans), and everyone’s great work is there (on display). You have great art direction, actors, editing and cinematography. So I was very proud to represent my country.

ShockYa: “Blancanieves” took a long time to get off the ground, but you’d had this idea a long time ago, of course. Between movies, though, you were also teaching film, is that right?

PB: “Torremolinos 73” was released in Spain in 2003 and America in 2004, and I wrote the script for “Blancanieves” in 2005. And on the first page it says it’s a black-and-white silent film. Black-and-white is hard, but with it being silent it was just deadly. Everybody asked me, “Are you crazy? This is never going to get made.” Not only (is it) silent, but it’s not a little experimental film, it’s a big production. But I don’t know, I have patience and if I want something then I fight until I get it, so in the meantime, over all these eight years, I was teaching film. But I was also lucky that I was one of the producers of “Torremolinos 73” and it was a financial success. So between that and working and teaching I (was OK on money). What can I say — it’s a long tale with a happy ending.

ShockYa: Your movie re-purposes the Brothers Grimm fairytale of Snow White, yet is also a tribute of sorts to silent films. What was the moment when those things sort of matched up in your mind — the idea or narrative, and then the form or mode, the means by which you wanted to tell it?

PB: For those two things I recall two clear moments. For the first one we’d have to go back to the mid-’80s. I’m from Bilbao, and next to us there’s a city called San Sebastian that has a fantastic film festival, one of the biggest festivals in the world. I used to go there every year for a week, and one year as a teenager I saw “Greed” from Erich von Stroheim with a live orchestra, and let me tell you, I flipped. I had this ecstatic moment that I still get goosebumps thinking about, because it was (such a) cinematic discovery. I was like, “OK, this is cinema, in a way that I’ve never felt before.” After that, I bought VHS movies, and DVDs later on, and watched silent movies. Later on, in the early ’90s, I found this book called “Hidden Spain,” and there was a series of photos of bullfighting. In one, there was bullfighter looking straight at the camera, and it was so mysterious and fascinating to me. And I remember I imagined what would it be like if I placed in the middle of this photo Snow White as a bullfighter. That was another key element — so I thought, now I can make Snow White, but in a bullfighting environment, and if you add to all that that one of my favorite films is Tod Browning’s “Freaks,” I had all these ingredients for a cocktail as a starting point.

ShockYa: Had you worked with Kiko de la Rica before, because the playful visual sense of “Blancanieves” is really one of the film’s strongest, most delightful selling points.

PB: Yes, I’ve known Kiko since my early 20s. He’s from Bilbao as well, and was my cinematographer on “Torremolinos 73.” In a way we’re like Siamese twins — I’m always next to him or he’s next to me when we’re on the set. I’m the type of director that doesn’t sit by the monitor, I like to be next to the camera. So he’s wonderful — he knows my strengths and weaknesses and [vice versa], so we just cover and complete each other so well. It’s always a pleasure to work with him, because he’s so talented and intuitive, and the camera is like an extension of his hand.

ShockYa: Every artist creates for the work itself, and the experience of that, but you have to be mindful of the marketplace as well —

ShockYa: And before they release a book or album or film there’s understandably this trepidation about things that it might be perceived as being overly similar to. Just because of the order in which they were released you can’t really talk about “Blancanieves” without talking about the success of “The Artist.” So what was the moment like where you first heard about it? And then secondly, were you as panicked as I might imagine?

PB: (laughs) Well, from 2005 through eight years I was getting all this money and support from private investors, and suddenly when we broke our piggy bank to start production, one week before we started shooting I received a text message from a producer friend of mine at Cannes who had just seen “The Artist” and he tells me the Weinsteins bought it, and that he thought it was going to help me. At that moment I didn’t think it was going to help me, and I wanted to jump out of my window and kill myself because there’s a French movie coming before my movie and it has the same concept. I don’t think it’s necessarily original to make a black-and-white silent film, it had been before — we can’t forget Guy Maddin or others, so I don’t think it’s so unique. But what “The Artist” definitely shared with my movie was that we were making a black-and-white silent movie for a big audience — they were expensive, big-budget movies that were not only for cinephiles. They were for audiences that had never seen a silent film. So I said, “Fuck, fuck, fuck, fuck!” But I’m the positive type, so the following day I decided to look forward and not back. I think if you look back you fall. So I realized that it was great news that “The Artist” came — that it was destiny, and would be like an icebreaker. And so I think that a lot of people that came and saw “The Artist” are going to come and see “Blancanieves” and enjoy it as well. And it’s been a huge success in Spain. So I want to think in a way that “Blancanieves” and “The Artist” are like cinematic terrorist acts — a reminder for the filmmakers and audiences that what makes films unique is the visual storytelling. So hopefully after “Blancanieves” comes another black-and-white silent movie from who knows where.

PB: Right now, because I’m the writer-director-producer, I’m traveling around the world like a barker at a freak show saying, “Come in and see ‘Blancanieves!'” But it took so long between my last two films that I have a couple of scripts in my drawer, and I’m looking forward to when the train stops and then re-reading those scripts and figuring out which one I want to make next. The only thing I know is that when I make a film I have to believe it could be my last one, so it has to be an act of love. 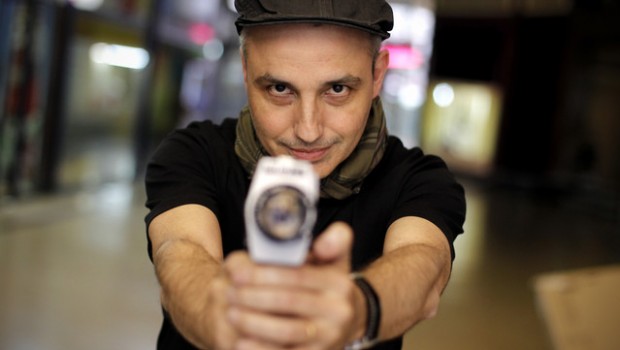