Mental‘s that special kind of independent comedy that comes along and uses it’s quirky aspects to its advantage. Writer/director P.J. Hogan lets his actors and script do the comedy for him, which draws almost verbatim from his life experiences. Hogan directs the film with a breath of confidence that’s missing from a lot of independent comedies these days, and while his most noted films are My Best Friend’s Wedding and Confessions Of A Shopaholic, it’s with no doubt that Mental is his finest work to date.

I was very lucky to talk to Mr. Hogan about his achievement, the inspiration behind it, and even managed to mix in some Richard Pryor talk. Here’s what the man had to say…

I wanted to ask you about the script. How did you come up this idea and make it as smart as it is?

I actually didn’t come up with the idea. It all happened, it’s a true story. When I was twelve years old, living in Queensland, my mother had a complete nervous breakdown, and was institutionalized by my dad, who was the local mayor. At the time of my mother’s breakdown, he was running for re-election. He said to us, ‘Nobody votes for a guy whose wife is bonkers, and the official story is she’s on vacation.’ Unfortunately, every time somebody asked us where she was, we’d all give a different answer. Also, we were not the easiest kids. It wasn’t my dad’s fault that my mom ended up going crackers. Put it this way, when my mom was away, we took full advantage. We ordered in pizza, I started dying my hair, my sister pierced her own ears, and no clothes being washed, no beds being made. He didn’t know what to do with us. One day, he passed a hitchhiker, and he trusted her because she had a dog, and he gave her work. He hired her, and we found this strange woman sitting on our couch in the mess that we had made, and she was smoking what I thought was a cigarette that smelled really funny. She had a hunting knife sticking out of her boot. Her dog turned out to be even crazier than she was. It was this snarling, vicious canine. The first thing out of her mouth was ‘This is a bit of a mess, isn’t it?’ She sicked the dog on us and we started cleaning the house. It pretty much unfolded as it happened, and to this day, Shaz remains one of the most brilliant, inspiring, crazy people I’ve ever met in my life.

Which of the kids are you based off of?

Well, I didn’t want it to come off like Muriel’s Wedding, which was also based off events in my life. I guess I’m the oldest girl. I cleverly disguised myself as her.

So did you work at a place where Liev Schreiber is a shark hunter?

No I didn’t, but my sister worked in a shark show. I made nothing of this up. You can’t make any of this up. Something like the shark show had to have existed. She worked in a shark show for a guy named Trevor, and he held the record for catching the largest Great White on record. The shark he caught in the movie was as big as the one he caught in real life. He did actually claim that it was the shark that ate Harold Holt, although he couldn’t prove it. He was sort of a mixture of Steve Irwin and if a serial killer’s victim’s were fish. That’s what he was. I met him only once, and he left an indelible impression on me, so I put him in the movie. As wacky and as crazy as the film comes across, it’s all based on real life. You can’t get more wacky than real life.

Did you just kind of go for all the comedy in the film, seeing as it’s based on real life?

Yeah, I didn’t play any of it up. It was an important film for me to make, and I took a while to make it because I wanted to do it right. I’m in the trenches with mental illness in my family, and I take care of it. That’s why I wanted to make the film funny and as politically incorrect as I could. The first reason I wanted to make it funny is because every time someone deals with mental illness, they make it serious and tragic. I think anyone who lives with mental illness or is the caregiver of someone who is knows that if you don’t find something laugh at, you go crazy yourself. A lot of people think if you’re bi-polar or schizophrenic you’re stupid and that’s just not true. You have a challenge, a mental challenge. Medication can help to a point. I really just like political incorrectness, especially when it comes to mental illness. To me, political correctness is a way of saying, ‘Don’t talk about it, unless you use the right words.’ And mental illness is already stigmatized. I feel like you should talk about it in as strong a language as you can. So the film is as in your face funny as it is, because I wanted people to talk about it.

Can you talk about the camera work in the film, as it’s smart and motivated?

I’m better at pictures, I think visually. I love movies, and always believed that the camera was just another character in the movie. I like economy, and I had to be economical in the way I shot it. I’m not a dump-truck filmmaker, meaning I don’t bring in three cameras to shoot coverage. I tend to shoot what I need, and put it together that way. I’ll do anything to try to impart a particular scene or feeling. The scene where the kids are going down the water slide, we shot that with a GoPro, for instance.

Mental is in theaters now, and I highly, highly recommend you seek it out. 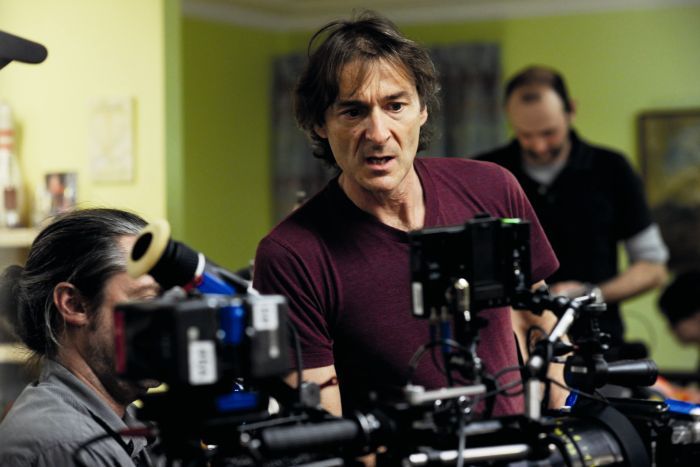