Did you know that there will be not one, but two versions of “Iron Man 3”? That’s right–there’s going to be more Tony Stark than usual this year, thanks to China preparing their own version of the Marvel hit for their audiences.

According to Comic Book Movie, Marvel Studios and Chinese media and entertainment company DMG announced that a Chinese version of “Iron Man 3” will be released in China sometime in the near future. DMG, which is also marketing and distributing the film, collaborated with Marvel Studios to develop the new movie elements for Chinese audiences.

So what’s different about this version? Well, for starters, China’s leading actress, Fan BingBing will be featured as well as acclaimed Chinese actor Wang Xueqi, who will also appear in the international and domestic version of the film. Marvel Studios said working with the two actors and shooting the film in China has been a very positive experience and, of course, they hope to not only collaborate with China’s film industry in the future, but they also are excited about bringing Iron Man back to China.

You can read the official statement at Comic Book Movie. I wish our U.S. version had Fan Bingbing in it; I’ve been thrilled by her fashion sense and I’d certainly like to see her grace American movie screens sometime soon. Hopefully there will be a way for both versions to be available to everyone once the home releases come out.

If you want to see what the Chinese trailer for “Iron Man 3” looks like, check it out below the post! “Iron Man 3” will be in theaters May 3. 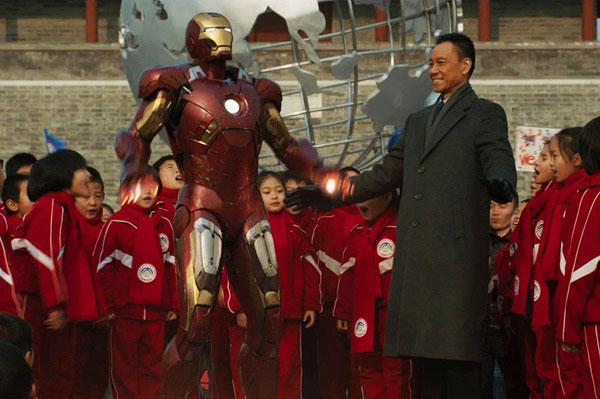