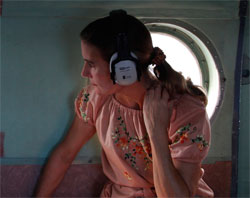 We continue our early Tribeca Film Festival coverage with an exclusive clip from the World Documentary Competition entry, “Alias Ruby Blade: A Story of Love and Revolution.”

Love and revolution may not be a very common pairing, but activist-turned-documentary filmmaker Kirsty Sword certainly experienced both while working on the film “In Cold Blood: The massacre of East Timor.” A young Australian activist, Sword left home to work as a researcher and interpreter for the documentary, however, she soon found herself functioning as an underground operative for Ruby Blade, the Timorese resistance in Jakarta. She was assigned to channel information from the group’s imprisoned leader, Kay Rala “Xanana” Gusmão, back to the resistance and, in the process, the two fell in love.

Director Alex Meillier tells a tale that stretches from the beginning of Sword’s experience through to the success of attaining freedom in East Timor and we’ve got a sneak peek at the earlier part of the story – Sword’s arrival in Indonesia as a documentary filmmaker.

Check out the clip for yourself below and click here to find out when and where you can catch “Alias Ruby Blade” in full at the Tribeca Film Festival later this month.