It’s been a solid year for the independent comedy. Where the sub-genre used to just get by on its quirkiness and mimic a style often overrated by Wes Anderson, this new batch seems to get that just being generally simple will be enough. Case in point: Starbuck. Ken Scott and Martin Petit have scripted a fun, well-crafted comedy, with Scott’s directing being focused more on storytelling rather than how many quirks can they fit into their picture. The film is headlined by Patrick Huard, who gives an absolutely great performance as David Wozniak, a man who has fathered 533 children. Huard plays David reserved, not indulging overly comedic and comes off as sympathetic.

Recently, I was very lucky to sit down with Mr. Scott and Mr. Huard and talk about the picture, as well as heap praise upon praise on them for what they’d created.

Where did the idea generate?

Ken Scott: The co-writer of the movie [Martin Petit] had this idea of having this sperm donor that had many, many kids. We thought it was a great chance to have some great comedy. It also a good chance to explore fatherhood, so the idea sort of came from there. We started writing, and we actually decided that 150 kids would be a great idea. But after we decided and we sort of struggled with ‘is this believable?’ We were six weeks into the process where it finally came out that there was a guy who had two hundred and fifty kids, so we were under. Then we did a bit of research and we saw that there were several cases out there where one guy was two hundred and fifty, another guy was five hundred. It became more exciting.

Why did you choose Patrick Huard for this part?

KS: I’ve been wanting to work with Patrick for several years. Our schedules sort of made it were it never worked out. With this one, when the first draft was done, we sent it over, hoping that he would be interested in the project. And it ended up that he enjoyed the script. Martin (the co-writer) and I, we feel we have a lot to say about fatherhood. We feel fatherhood has kind of changed over the last ten years. It ended up that Patrick felt the same way.

Patrick Huard: Exactly. We’re the same age, we all come from the same place. We started as stand-up comedians twenty-three years ago, we now have kids.

PH: [laughs] Not all the time! But for me, it was like reading me. I read that script and I was like ‘what? Somebody wrote that!’ I feel like that’s where I am right now as a man. I feel ready as an actor to do this. Physically I’m this guy. I was reading this at 8:30 in the morning, laughing out loud and crying. I could picture myself doing it. When I finished it, I called Francois, my partner and manager and said ‘I don’t want to do this movie. I have to do this movie. I’m doing this movie, I don’t care. I need to do this for me.’ This kind of script doesn’t come into your career often, so I didn’t want to miss it.

The character of David plays against the typical archetype. What were some of the things in your collaboration that led to that point?

PH: There’s a lot of stuff in the writing that Ken and Martin created, where you can see his good side. The trick on my is something I’m always doing when I play the part, and that’s not to judge the character. I don’t judge the character when I play the part. I think it’s the audience’s job to judge them. When I play a character, I’m convinced that what they do is the right thing to do. This guy decided to go and masturbate over six hundred times, and for him at that time, it was the right thing to do. I take for granted that every time people do something on this planet, is because they feel they should be doing it, otherwise they wouldn’t do it. But in all those situations, the writing was really great so I didn’t have to work hard to make him loveable. He’s so good with all of them, you just love the guy.

KS: It was important for the film to work, we have to want to follow the character. Even though he’s making these bad decisions, even though he has this past that some people could judge in a bad way, it was very important that we created the character in a way that people could relate and like him. The choice of Patrick, I felt that he had that in him. He had the qualities of a good actor. He was also compelling and we want to follow him. It’s a role where you have a lot to do. I felt Patrick was the right person for that.

PH: You have a lot to do, but you have a lot of time to do it because you’re in every scene. You can do one thing in one scene and it means a lot. You don’t have to try to tell six things in one scene, because the next one will still be there. You will have time to tell something else. For an actor, that’s a gift.

Ken, your direction in the film is superb. It’s a comedy, but it’s also doing what few films do now and tells a story. The scenes with Raphael, David’s mentally ill son, how tough were those to shoot. And for Patrick, how hard were those scenes to film?

KS: Patrick knows comedy, and he’s confident in the comedy. Once you’re confident with that, you’re good. We don’t have stretch here and stretch there. Let’s just do that comedy and put some emotion here, and some good storytelling there, and see if it all flows together. We have to have that confidence. When you’re shooting the movie, you’re shooting maybe three or four minutes of storytelling per day. It’s possible in one day, you don’t have a comedy and you have to make sure everybody is OK with that.

PH: The thing with Raphael is, all the scenes with him were a lot of fun. There were no lines, and a lot of people have been asking us ‘what makes a good dad?’ We think the same thing, being there is what does. That’s what David does for Raphael. He doesn’t know what to do. He’s uncomfortable, but he keeps on being there. He goes through this whole day of uncomfortable situation, and doesn’t know what to and what to say, but he keeps on being there. And for me, just do it. Just be there. As a director, just shoot it and have the confidence to let it be long. A lot of directors would have cut all of this and made sort of a montage. A movie is something you need to feel, and to keep that moment just long enough so you feel uncomfortable with him, and you start to think, ‘If it was me, I would have done what?’ And you start to think, ‘He’s amazing,’ and I do nothing, I’m just there helping him to eat. Watching TV, walking outside with him. It’s nothing. You start to think he’s great just because he’s there with him. Those are great moments, and it’s beautiful when he goes to get Raphael to watch the sunset and the sunrise with the brothers and sisters.

Starbuck is now playing, and will expand over the coming weeks. I strongly recommend you check it out. 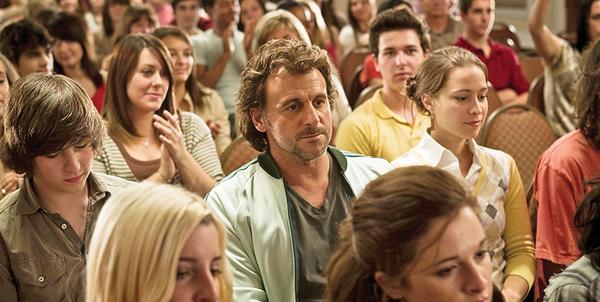