Obsession, in all its various shapes and forms, is a rich thematic vein when it comes to filmmaking. And of course labyrinthine myths and legends are integral parts of storytelling proper, but they also crop up and gather naturally around a variety of Hollywood productions — from ambitious but troubled blockbusters to the works of secretive and/or iconoclastic auteurs. All these swirling elements come together in “Room 237,” director Rodney Ascher’s nonfiction indulgence of a bunch of theories about the true meaning of Stanley Kubrick’s 1980 horror film “The Shining” — hypotheses that, ultimately, even Mel Gibson’s wild-eyed character from “Conspiracy Theory” or Jim Carrey’s digit-fixated paranoiac from “The Number 23” would have trouble believing.

So does that make “Room 237” — its title referring to a notably spooky suite in the film — a waste of time, or even boring? No, not at all. Even though several of these analytical readings don’t pass a cursory smell test, and all have been pretty much debunked by Leon Vitali, the late Kubrick’s personal assistant on “The Shining,” that doesn’t dint the film’s power as a testament and kind of paean to the sticky psychological hold of great art. One interviewee views Kubrick’s liberal adaptation of Stephen King’s bestselling novel as an indictment of the U.S. government’s treatment of indigenous peoples, while for another — seeing significance in the number 42, and its divisibles — it is a sweeping parable about the Holocaust. Still another sees “The Shining” as an elaborate confessionary lament on the part of Kubrick for his involvement in faked space exploration footage with the government. (“I’m not saying we didn’t go to the moon,” he says, before opining that he’s setting himself up for an audit. “I’m just saying that what we saw was faked, and it was faked by Stanley Kubrick.”)

What Ascher doesn’t do, for better and worse, is offer up push-back or analysis of this conjecture, or query his nine different subjects about whether any of these theories might in fact be mutually exclusive. (In fact, Ascher doesn’t even show his subjects, some of whom are interviewed over the phone, it’s evident.) A movie of more intellectual rigor or ambition might have tackled that. Instead, “Room 237” is a platform for their compulsions and fixations, and in its unironic embrace of their singular truths it sometimes takes on the feeling of trying to engage a schizophrenic bus passenger on their own conversational terms.

Still, the flipside of this is that “Room 237” ably conjures up the isolation and disorientation of “The Shining” itself, abetted by a great score from Jonathan Snipes and William Huston. It’s also just a good deal of fun, in its own wonky, slurry way. Powered by a deep and abiding affection for both “The Shining” and Kubrick in general, “Room 237” is an amuse-bouche of remix culture — a very specific film that is also about the dance of intention and interpretation. In his scrupulous avoidance of debunking, it’s clear that Ascher’s aim, essentially, is to throw a spotlight on interpretive criticism and embrace, and underscore that the relationship between art, artist and the culture at large is a complex one, with frequently hazy boundaries. 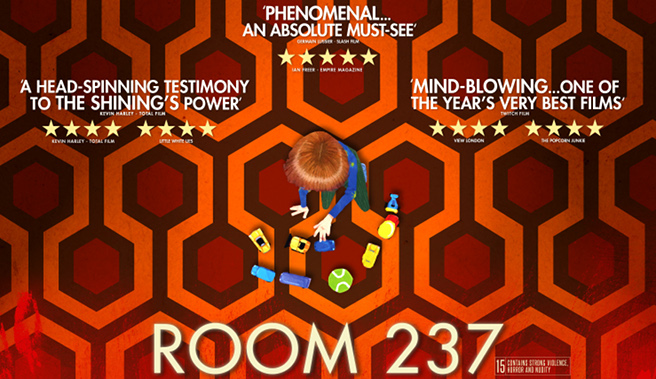