To the Wonder Movie Review

Title: To the Wonder

Grappling with unexpected change in romantic relationships, and living with the painful consequences of that change, is an emotional motivating factor for people to reflect on their life choices. The importance of trying to negotiate the space between the emotional pain you can inadvertently cause those you love and the importance of caring for yourself, is the complex question presented in writer-director Terrence Malick’s new romance drama, ‘To the Wonder.’ Aided by visually stunning and inspiring cinematography and production design, which shows that love isn’t all consuming and ever-lasting, the film daringly delves into the question of how much people owes those they love, at the expense of their own happiness.

‘To the Wonder’ follows Neil (Ben Affleck), an American traveling in Europe who falls in love with Marina (Olga Kurylenko), an Ukrainian divorcee who’s raising her 10-year-old daughter, Tatiana (Tatiana Chiline), in Paris. The two lovers travel around France, including the Mont St. Michel, as they bask in the wonder of the newfound romance. Neil makes a commitment to Marina, and asks her and her daughter to move with him to his native Oklahoma. He takes a job as an environmental inspector there, while Marina and her daughter settle into their new lives in America. However, their relationship slowly begins to lose its passion.

Marina finds solace in the company of another exile, Catholic priest Father Quintana (Javier Bardem), who is undergoing a crisis of faith. But despite the priest’s guidance, work pressures and doubt continue to pull Marina and Neil apart, leading her and Tatiana to return to France when her visa expires. While back in Paris, Neil reconnects with Jane (Rachel McAdams), an old flame, and the two fall in love. Much to Jane’s disappointment and anger, Neil decides to end their relationship when he learns that Marina has fallen on hard times in France. Overcome by a sense of responsibility, and his own crisis of faith, Neil rekindles his relationship with Marina after he takes another trip to France. She returns with him to America and the two get married, but the old troubles that once plagued their relationship slowly start to resurface.

Much like his previous films, like the 2011 fantasy drama ‘The Tree of Life,’ Malick used unconventional, but at times stimulating and effective, storytelling methods in ‘To the Wonder.’ The director offeres a personal insight into the emotions and motivations of the characters by forgoing in-depth dialogue, and instead intimately chronicles their physical interactions with each other. The characters also uniquely ponder their situations through their pondering and thoughts, which act as philosophical narrations in every scene. Malick skillfully chronicles the often relatable, conflicting feelings Neil and Marina feel toward each other over the course of their relationship through this unconventional way. Their initial physical and emotional attraction is clearly evident as they travel through France together in the beginning of the film. The two lovingly touch each other while they’re traveling to, and and spend the day at, Mont St. Michel, for example, clearly exuding their passion towards each other.

But while the filmmaker strived to illuminate the spiritual depth of Neil and Marina’s subsequent emotionally turbulent relationship, after their early physical and emotional attraction begins to fade, the cause of the emotional destruction of their love isn’t clearly evident. The lack of extensive, meaningful dialogue between the two characters, and the at-times incoherent thoughts Marina has as she tries to contend with her feelings, fails to truly explain the destruction of their relationship, and their motivation in reuniting after Neil forms a romantic connection with Jane. While the lack of dialogue is meant to allow viewers to philosophically ponder why Neil and Marina began to lose their passion for each other, the lack of explanation over why they choose to separate and later reunite made their actions and motivations difficult to understand at times.

Despite its at-times confusing emotional motivations of its characters, ‘To the Wonder’ visually streses the characters grappling with the consequences of the good and bad changes within themselves, and the unintentional pain they subsequently inflict on those they love as they care for themselves. Malick presents the film as though its a memory Neil and Marina are remembering, as they ponder what went wrong in their relationship. Cinematographer Emmanuel Lubezki continuously slowed the action, and sporadically jumps from seemingly unrelated interactions in a nonlinear way, to show both the unexpected jumps between the painful and happy times in the relationship. Lubezki skillfully brightened the passionate scenes between the two lovers, and darkened the conflicted scenes in which they were fighting; the stark change showcased how intensely the two cared for each other, but how their differing outlooks on life prevented them from living together.

Production designer Jack Fisk also helped emphasize Malick’s philosophical ideas on love and relationships through his skillful preservation of the earthly nature of the town of Bartlesville, Oklahoma, where they shot the romance drama. While the town has preserved many of the buildings erected in the early 20th century, which emphasizes Neil and Marina’s storied love affair, Fisk also utilized contemporary settings to show the town has yielded to the modern age. The couple moves into a low-slung ranch house after they get married, for example, to highlight the fact that they are trying to move forward with society’s ideals on leading the perfect life. However, their house is sparsely decorated, and the furniture and few personal belongings the couple do have on display stresses the fact that they no longer know how to relate to each other.

The small town feel of Bartlesville is deeply intensified by the contrasting settings Neil and Marina visit in France. The two travel to Mont st. Michel, the island off the coast of Normandy, during the opening sequence of the film, which is the peak of their love and romance. The rocky beach is void of any other tourists on the day the couple visits, allowing the two to bask in the solitude of their happiness together. The sweeping fortress reflects how the two believe their love is also endless, particularly since they don’t have any external forces to influence their decisions or feelings. Neil and Marina realize that their love isn’t all consuming and ever-lasting after they leave the luminous tourist attraction. When they arrive in the small Oklahoma town, their feelings of not being able to grow and escape negatively impact their feelings for each other.

‘To the Wonder’ is an emotional, character-driven film that pushes its viewers to look past their own selfish interests and consider the obligations they have to their loved ones. The story contemplates the everyday, real life moments between two lovers, after the initial passionate feelings they had for each other begin to fade, and before the resentment they’re sure to feel for each other starts to settle in. Through Malick’s unique way of storytelling, presenting the characters’ actions in a nonlinear fashion, as they serve as memories and reflections on their past mistakes, showcases how people grapple with the changes in their lives. The question of how much a person owes the person they love at the expense of their own happiness is vividly emphasized by Lubezki and Fisk’s intelligent and thoughtful cinematography and production design, which shows that love isn’t all consuming and ever-lasting. 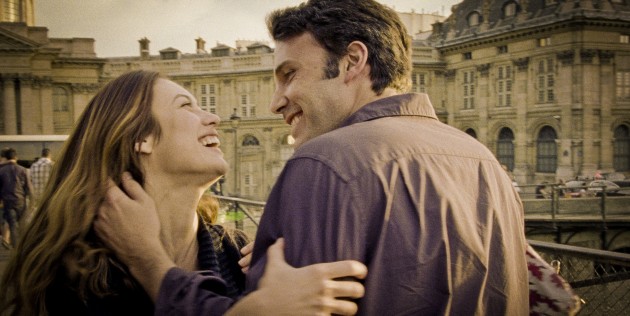