Joseph Kosinski’s latest science-fiction film, based on his unpublished graphic novel edited by Radial Comics, contrarily to its title is not in the condition of passing unnoticed or being forgotten. ‘Oblivion,’ sets an original and groundbreaking cinematic event from the visionary director of ‘TRON: Legacy’ and producers of ‘Rise of the Planet of the Apes.’

Tom Cruise plays Jack Harper, a tough and self-reliant soldier in the year 2077. He has been tasked – along with the adoring Victoria, played by Andrea Riseborough – to monitor what remains of Earth prior to humanity’s final emigration, supervising a fleet of pilotless drones which hunt down hostile scavengers, hiding out on the surface. Jack’s memory has been wiped in order to prevent hostile forces interfering with his tasks but he is haunted by the mental images of a romantic encounter in pre-war New York with a beautiful woman, he’ll eventually find as human survivor, Julia played by Olga Kurylenko. Following her arrival, he is captured by an insurgency led by the mysterious Malcolm Beech, played by Morgan Freeman, and following a series of events he is forced to question everything he knows about the invasion and its aftermath. This will determine Jack’s turning point: his confrontation with the past, leading him on a journey of redemption and discovery as he battles to save mankind.

The solemn and majestic images of planetary ruin, in the vast desert, are breathtaking and somehow echo Wall’E’s debris scenery, without having the same nostalgic spark to it. The only vintage relic possessed by Jack – capable of stirring some emotion and humour – is a Bob Dylan desk figure with a bobbing-head that he keeps in his aircraft as lucky charm. The futuristic gadgets in the movie recall an updated version of the ones seen in ‘Minority Report’, an additional aircraft whooshing through the mist, and a motorcycle whizzing through the sandy landscape. Visually it’s unimpeachable: in IMAX, ‘Oblivion’ is a gorgeous ocular experience. But the story goes on for a long time, moving slowly and self-consciously, the plot itself feels numbed, directionless and dull. ‘Oblivion’ confirms Joseph Kosinski’s talent in crafting a world, but he still seems to stumble on portraying interesting humans populating it. He has in fact channelled the actors’ performances toward one-note, Riseborough as cold to the touch, Kurylenko as ethereal beauty standing stock-still and Freeman impregnated by an unfaltering calm gravitas. The only one who seems empathetic is Cruise, who manages with his effortless charisma to act on more levels.

The visual ambition of ‘Oblivion’ is so overwhelming that it becomes a character in the movie, now Kosinski needs to focus on giving his characters an emotional environment that is just as rich. 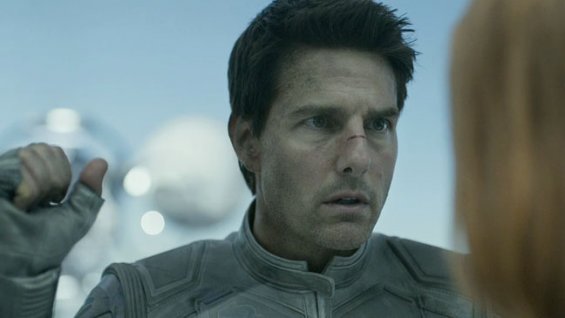