“Da Vinci’s Demons” will be back for a second season! The news about the Starz Original Series was announced by Starz’s Chief Executive Officer, Chris Albrecht.

The first episode of the series, created by David S. Goyer and produced by Adjacent Productions, premiered Friday, April 12 with more than 2.14 million total viewers, making it the highest-rated premiere weekend ever for a Starz Original Series.

Production on the second season is expected to begin in Wales this May, with the projected airing date of 2014.

“’Da Vinci’s Demons’ serves up action, adventure and history in a unique and highly entertaining way that only someone like David S. Goyer can,” said Albrecht. “The first season premiered to strong audience engagement and we are excited to bring the next chapter of Leonardo da Vinci’s adventures to audiences around the world.”

“I’m excited that we get to continue the adventures of the world’s most eccentric and glorious polymath. Long live Leonardo and thanks to Starz for helping to make it happen,” said Goyer.

Jane Tranter, Executive Producer of “Da Vinci’s Demons” and Head of Adjacent Productions, also said, “’Da
Vinci’s Demons’ has been a great passion project for us and it has been a privilege to work with Chris, Carmi and their terrific team at Starz, and with the creative vision of David S. Goyer. We’re excited to continue this journey for another season and to bring the genius, passion and adventure of Goyer’s Leonardo da Vinci to viewers around the world.”

“Da Vinci’s Demons” stars Tom Riley as a young Leonardo da Vinci as he deals with his turbulent years in Renaissance Florence:

“Brilliant and passionate, 25-year-old Leonardo da Vinci is an artist, inventor, swordsman, lover, dreamer and idealist. As a free thinker, with intellect and talents that are almost superhuman, he struggles to live within the confines of his own reality and time. He begins to not only see the future, but invent it.” 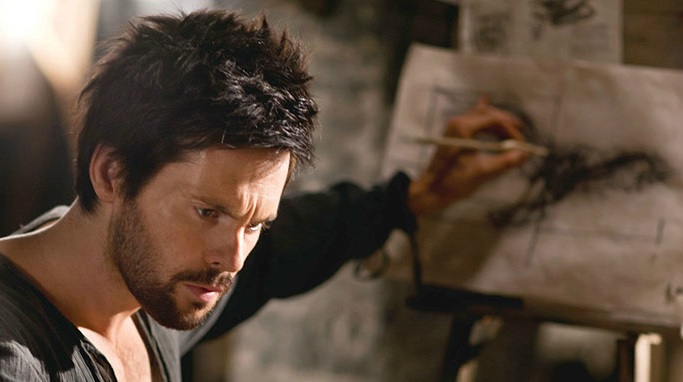