Ready for a good murder mystery? “Hemlock Grove,” from executive producer Eli Roth, will keep you guessing. The film, based on the novel by Brian McGreevy, stars Famke Janssen, Dougray Scott and Bill Skarsgard and will premiere on Netflix April 19. Here’s more about the film:

“From executive producer Eli Roth and based on Brian McGreevy’s novel of the same name, Hemlock Grove is a riveting one-hour murder mystery that revolves around the residents of a former Pennsylvania steel town. When 17-year-old Brooke Bluebell is brutally murdered, any of Hemlock’s peculiar inhabitants – or killer creatures – could be suspects. Through the investigation, the town’s seamier side is exposed, revealing nothing is what it seems. Beautiful, terrifying and graphic, Hemlock Grove is unlike anything else in its genre.”

If you’re excited about “Hemlock Grove,” we’ve got a great giveaway for you!

The “Hemlock Grove” prize pack giveaway we have includes:

To enter, follow us @Shockya. Then tweet the phrase, “@Shockya is giving away a Hemlock Grove prize pack! Follow and RT to enter!” You can tweet us every day until May 1; after that, we’ll pick the winner at random and notify them through Twitter DM. Good luck!

If you dare, check out this very red-band, very trailer for the series. What do you think about this show? Give your opinions in the comments section below. 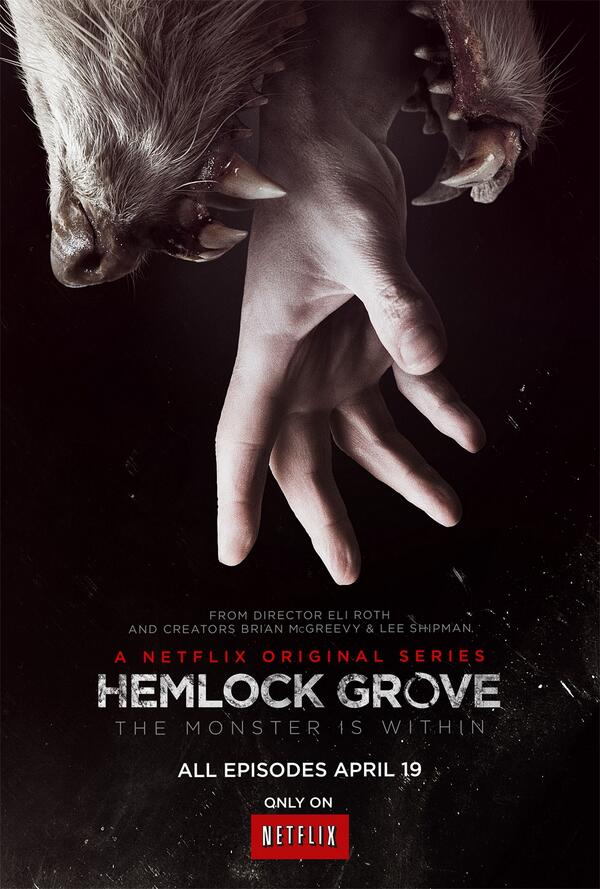