The big surprise in “Midnight’s Children,” which Salman Rushdie adapted from his own 1981 novel, is that at just under an exhausting two and one-half hours, we exit the theater knowing little about the characters. It’s not that director Deep Mehta fails to focus on them, especially on a young man named Saleem Sinai, but that he and others appear to be not fleshed out personalities but rather folks to delineate crucial high point in the history of India and Pakistan over a sixty-year period. The picture is cinematic enough, in fact Rushdie’s novels, including his “Satanic Verses” which led to a fatwa’s being proclaimed on his life, seem written expressly to be later carved into celluloid. “Midnight’s Children” is filled with mayhem and miracles, its humor on the dark side rather than belly-splitting, its characters so numerous that you may want to design a family tree such as that used by Ancestry.com to get a clearer picture of each person’s identity.

In yet another of those switched babies sagas, a nurse, Mary (Seema Biswas), naively using her authority to carry out a radical, communistic theory, switches babies at birth. One belongs to a poor man who ekes out a living playing the accordion and singing silly English songs, the other to a rich family intending to make their son into a virtual prince among men. (In another irony, the accordionist is not the real father but that designation belongs to a British aristocrat (Charles Dancy) who stirs his cocktails with his fingers and who is about to leave India at the moment of its independence on August 15, 1947.

The two babies are born at midnight, as are some 581 other toddlers, giving them magic powers, which Saleem at age ten (Darsheel Safary) is able to conjure up simply by sniffing with his big nose. Of these hundreds, the only one of importance to the plot is Shiva, the baby who should have been given to the rich family but instead has his life “stolen” by Saleem. Shiva later becomes a decorated hero while Saleem takes up with Parvati (Shriya Saran), a witch. Much of the action takes place during Indira Gandhi’s emergency measures, and in fact because Gandhi is taken over the coals, the film had to be made in Sri Lanka to avoid censorship.

Cinematography is colorful, making good use of the garb worn by women especially when photographer Giles Nuttgens captures all-too-brief wedding scenes, and Nitin Swhney’s original music brings back memories of background music in New York’s Indian restaurants and especially the glorious influence in the sixties and seventies of Ravi Shankar’s sitar. 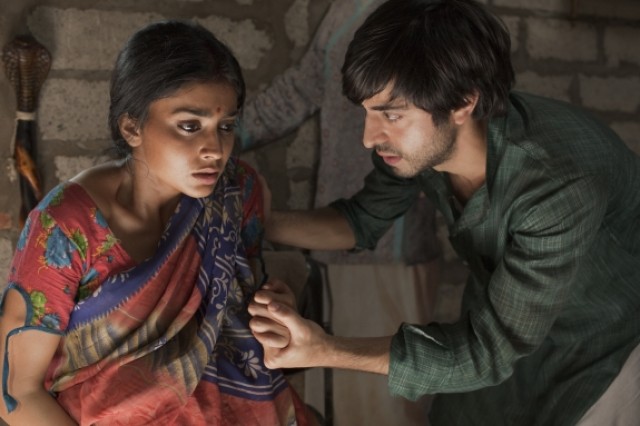