The Lords of Salem Movie Review

Title: The Lords of Salem

Rocker-turned-writer-director Rob Zombie has, in a fairly interesting and definitely surprising manner, carved out a certain multi-media genre niche for himself, spinning off horrific visions both original (“The Devil’s Rejects”) and adapted (his “Halloween” remakes). His latest film in some ways seems like a no-brainer, the type of easy-fit movie Zombie (who’s devoted to to making a period piece hockey tale as his next film) could churn out every 18 months or so if he desired. In it, a Salem, Massachusetts radio deejay starts having strange flashbacks of her town’s violent, witchy past after receiving a mysterious record addressed to her at work. Could it be… Satan?! Or maybe just some of his minions?

Zombie, as one might expect, has a nice sense of aural construction. The guitarist in his band, John 5, contributes a score, and the metronomic bass thump of the tune which puts Heidi in a trance is mesmerizing in its own way; Zombie also sneaks in some classical music as well. “The Lords of Salem,” too, is definitely a movie of considerable production design (hat tip to Jennifer Spence and director of photography Brandon Trost), insofar as its nightmare sequences pack a to-scale punch of jangly, unsettling discomfort.

But while Zombie trots out a few interesting and provocative premises (“A lack of sensory pleasure is the principle root cause of violence,” intones the TV in the background in Heidi’s apartment), he fails to fully chase down and wrestle to the ground any of these themes in an engaging or meaningful way. Instead, “The Lords of Salem” basically just works its way through very familiar notions of rekindled pagan idolatry and evil. The movie charts a weekly timeline, but there’s not really much of a ticking clock driving the plot, so its swan-dive into arbitrariness from the second act on is fairly complete.

The best of Zombie’s big screen efforts have a sense of leering, organized chaos — of merrily depraved yet finely calibrated manipulation. ‘The Lords of Salem,” though, feels… well, tame isn’t the right word. But Heidi’s ex-junkie past — which in a more ambitious film could have flowered into its own dark, knotty subplot — is instead just a tossed-off detail, like so many elements here. Zombie exploits the history of the Salem Witch Trials, but not in quite as wild and memorable a manner as one might expect. 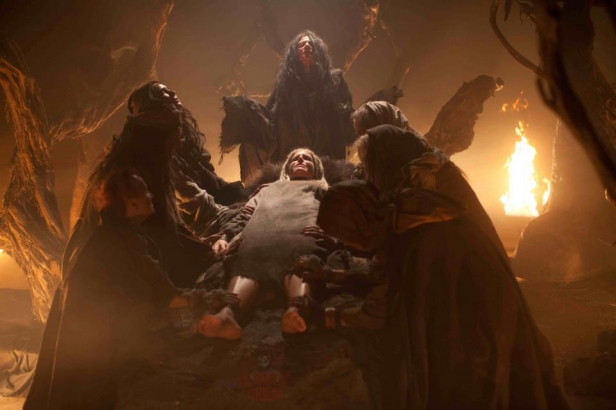