I’ve often argued that all Michael Bay needed was the right script, and his talents as a director would come through. The man has often been called “The Worst Director In Hollywood” (Brett Ratner deserves this term, however.) True, most (if not all) of Michael Bay’s films are hollow excuses for explosions, chases, and shoot em-ups. Let’s be fair here though; Bay’s only made two truly terrible films in Pearl Harbor and Transformers: Revenge of the Fallen. The thought of Pain & Gain is exciting, because Bay’s doing a much smaller picture without explosions, and relying on his actors to tell his story.

At least the film certainly doesn’t feel small, as Michael Bay makes sure all of the $25 million is displayed on the screen. His iconic cinematography is captured, and feels right in line with his bigger budgeted outings. Bay’s never wasted a dollar, making sure the audience and studios get the most bang for their buck. The man knows what he’s doing, and it’s why he continues to be one of the highest paid directors in Hollywood.

Bay’s never been one to be subtle, and thankfully Pain & Gain doesn’t afford him the chance to be. Christopher Markus and Stephen McFeely’s script is just as bombastic as its director, and Bay perfectly embraces it. They’re out to show the nasty side of the American Dream, as if Bay is intentionally being ironic with American flags flapping everywhere. Bay feels he’s showing that the American Dream really is; an envious soul that only concerns itself with destroying our fellow man. Whether that’s true or not, it’s clear Michael Bay has finally made a movie with social commentary.

Bay’s cast helps guide him, as Mark Wahlberg’s Daniel Lugo is the scum of humanity. He’s self-obsessed, and feels he doesn’t have to struggle to get what he wants, he can just take it. The charm of Wahlberg’s performance is that he plays it totally against all that, creating Lugo as a lovable loser. In some odd way, it works, as you want to like Lugo, but he’s too much of an asshole to see him succeed. Anthony Mackie’s Adrian Doorbal is a nice sidekick, and Mackie plays off of Wahlberg very well.

The show-stealer  is Dwayne Johnson as Paul Doyle, giving a career performance. He’s the comedic one of the group, yet Johnson plays him incredibly straight. Doyle also ends up being the only likable one of the group, or at least the one you hope doesn’t get the worst punishment. In lesser hands, the character might’ve been overly done, as many of Bay’s comedic characters are. Johnson’s too good of an actor to let that happen, and reigns in some of the sillier aspects of Doyle.

Tony Shalhoub’s Victor Kershaw is played as a big asshole, and Shalhoub embraces it fully. He’s not as complex as our other leads, but he doesn’t need to be. Shalhoub flirts with the irony that the whole movie is working with. The most positive character comes in the form of Ed Du Bois, played by Ed Harris. He’s the moral compass that the film needs, balancing out all the mean-spirited stupidity of the characters. Harris does the most pandering, playing Du Bois like a hardened badass. In another film, he might be stiff, but he works here.

It’s odd to spend a few paragraphs talking about characters in a Michael Bay film, as Pain & Gain is still very much one of his own creations. There’s action scenes in here, and the end could fit right in perfectly with either Bad Boys picture. Maybe it’s a testament that Bay’s finally made a real movie, and not an exercise in explosions. While it’s as bloated as the muscle-bound meat heads that lead our story, Pain & Gain shows that Michael Bay has the chops to actually direct, and shows a promising future for ‘Explodo’ if he chooses more projects like this.

But if Bay ever learns subtlety, then we’re in trouble. 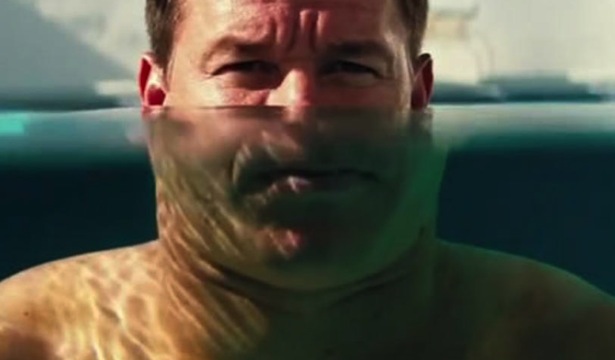