It’s a moderately funny, largely deplorable narrative with entirely unlikable leads, but thanks to “Pain & Gain’s” true roots, it gets away with it.

Danny Lugo (Mark Wahlberg) loves his job as a personal trainer and is practically singlehandedly responsible for turning Sun Gym into one of the hottest spots in town. Trouble is, the job still doesn’t pay well enough and Danny is desperate to start living the good life. In an effort to make the big bucks quick and easy, Danny recruits his co-worker, Adrian (Anthony Mackie), and an ex-con, Paul (Dwayne Johnson), to help him kidnap his über wealthy client, Victor Kershaw (Tony Shalhoub), and torture him into signing over all this finances.

Had “Pain & Gain” not stemmed from true source material, we’d be left with an absolutely outrageous film driven by wholly detestable protagonists and nothing more. However, not only does the true story come with intrinsic intrigue, but then Michael Bay takes it two very effective steps further to ensure you never forget it. At the onset we’re informed, “Unfortunately, this is a true story,” and then, when the absurdity of the scenario hits a peek, he reminds you, “This is still a true story,” forbidding you from writing off all the abysmal behavior and enticing you to actually appreciate it.

And “Pain and Gain” really needs that effect because while Wahlberg, Mackie, and Johnson all excel from a performance standpoint, the characters they’re given have zero redeeming qualities. Yes, Danny just wants to live the American dream, but his deceitful way of going about it is insulting to the rest of us working to earn an honest living. Adrian is a loving husband who genuinely wants to make his new wife (Rebel Wilson) as happy as can be, but then he’s got no trouble ruining other peoples’ lives to make it happen. There’s just no rooting for our main men to succeed because they’re so clearly in the wrong.

However, then there’s Paul. Poor god-fearing, violent, and confused Paul. Paul does eventually forgo all likability thanks to his propensity to lose his temper, bash a priest’s head in, and bury his face in coke, but he gets away with more than Danny and Adrian because he’s so easily manipulated and often, it’s by the two of them. The guy goes from ex-con hell-bent on becoming a respectable member of society, to Danny’s gullible minion, to a raging drug addict ready to kill at the drop of the hat. The transition is abrupt, but Johnson absolutely nails the comedy, innocence, and violence that come with the role, making Paul the slightest bit endearing, quite horrifying, and also a total blast to watch.

Danny, on the other hand, is the main man so is responsible for keeping the focus on the mission and while he does serve as an effective vehicle, he’s all the more horrible for it. His behavior and goals are just so selfish and downright malicious that it’s nearly impossible to find a single redeeming quality to connect to. At least Adrian uses his cut of the cash to buy a home for his wife. Danny just moves into Kershaw’s house, zips around in his flashy cars, and indulges in all of his personal belongings. You can’t feel happy for him because it’s all too spiteful.

However, it still comes back to “Pain and Gain” being based on a true story. You don’t need to be rooting for Danny, Adrian, and Paul to make off with the money or even for Kershaw to get his hard earned fortune back; it’s much more about experiencing their crazy story and, it turns out, Bay’s epic disaster shooting style makes for the ideal way to do just that highlighting the scale of the robbery and amplifying how ridiculous the whole thing is. Framing typically used to accentuate Transformers robots are repurposed to put Bay’s body builders in a monstrous light. The vibrant color pallet also pops big time, making the rich and famous Miami lifestyle all the more appealing, and, in turn, keeping the trio’s goal in the forefront at all times.

There’s proficient work all across the board, but “Pain and Gain” comes down to patience and taste more than anything. The film’s about 30 minutes too long and you definitely feel it, and particularly because some of the more drawn out moments involve outrageous shows of malicious violence. Danny, Adrian, and Paul being bumbling robbers is funny, but when they flip the switch and show signs of being a truly wicked brigade of criminals, the comedy and deeply cruel brutality collide and it becomes too uncomfortable to enjoy anymore. 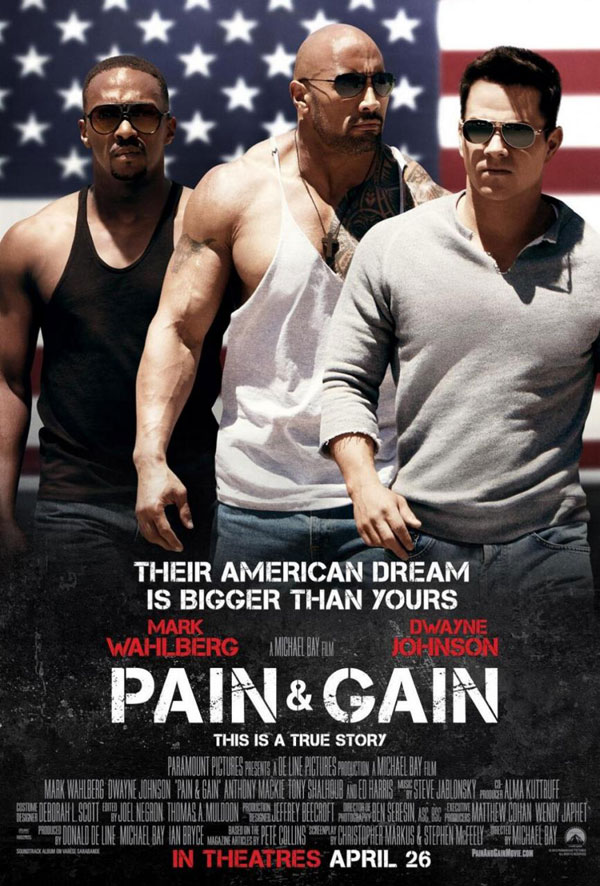