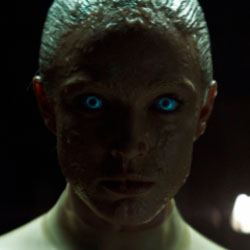 Unless you caught “The Pact,” actress Caity Lotz is probably off your radar, but between “The Machine” making waves at the Tribeca Film Festival and “Battle of the Year” heading towards a September 13th release, that could change fast.

In “The Machine,” Lotz first steps in as budding programmer Ava. Dr. Vincent McCarthy’s (Toby Stephens) been hard at work trying to develop a cybernetic super solider to help Britain’s Ministry of Defence through the second Cold War, and when he realizes Ava has the technology he needs to perfect his design, he makes her his #2. When their work is complete and Vincent automates the first robot with the potential of being the ideal model, Lotz takes on another role, playing the machine itself.

Playing the machine versus Ava didn’t just require Lotz to speak with a mildly robotic voice or adopt a stilted gait, but also to understand the technology and how it works, which, in turn, left her with the challenge of selling the concept that this machine is capable of comprehending, feeling, and learning.

While celebrating “The Machine’s” world premiere in the festival’s Midnight division, Lotz sat down to talk about the difficulty of keeping her facial muscles within machine range, the extensive makeup process, how her dancing background came in handy, plans for “The Pact 2,” and much more. Catch it all for yourself in the video interview below and, if you’re in the New York area, see “The Machine” in full at its final Tribeca showing on Saturday the 27th at 11:59pm.