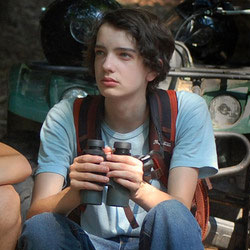 Writer-director Rob Meyer and co-writer Luke Matheny’s “A Birder’s Guider to Everything” likely won’t incite a mainstream birding craze, but the pair does deliver a charming coming-of-age tale that’ll at least let you enjoy it vicariously through the film’s Young Birders Society.

Kodi Smit-McPhee, Alex Wolff and Michael Chen are David, Timmy, and Peter, the only members of their high school’s Young Birders Society. When David is convinced he spotted an extinct Labrador duck, the YBS vows to track it down before it flies off for good. With their classmate Ellen (Katie Chang) and her powerful camera lens in tow, the boys “borrow” Timmy’s cousin’s car and head off to a park in Connecticut in order to catch the duck in the flesh (or feathers), and become birding legends.

While celebrating the premiere of their very first feature film at the Tribeca Film Festival, Meyer and Matheny sat down to talk about the challenges of transitioning from short films, the honor and pressure of working with Sir Ben Kingsley, the infectious high spirits of their young cast, and more. Catch it all for yourself in the video interview below and hopefully we’ll see “A Birder’s Guide to Everything” back on the big screen soon as it continues its festival run.