After all these years and all these film, the Marvel Universe is starting to feel very real and that’s vital to “Iron Man 3’s” success because without that acquired ability to re-tap into this realm where Iron Man, Thor, and more are the norm, the details of this installment of the franchise might have been too unsupported to let you enjoy the charm of Tony Stark, the excitement of seeing dozens of Iron Men assemble, watching Pepper Potts get a hefty dose of action and more well earned highlights.

It’s post-“Avengers” time and Tony Stark (Robert Downey Jr.) is still reeling from the battle in New York. Even while suffering from frequent anxiety attacks, Tony must carry on because there’s a new threat that needs his attention, a terrorist known as The Mandarin (Ben Kingsley).

That synopsis is cut and dry, but “Iron Man 3” is loaded with new and returning characters, intricate story details, and plot offshoots, too. Everything works well enough to make “Iron Man 3” the electrifying Tony Stark showcase you’d hope it to be, but unless you’re coursing through on cruise control, it’s easy to get caught up in the barrage of information and then frustrated with the lack of cohesive details.

Shane Black is appropriately relentless, jumping from battle to battle and using every single scene to push the narrative forward, and while that does make the film a fast paced thrill, it also makes it nearly impossible to digest details or track emotions. You feel it right from the start during a flashback scene in which Tony has his first encounter with Rebecca Hall’s Maya Hansen. The scene flows well, boasting a bold little storyline that sucks you right in, but there are a number of finer details that are glossed over, making them impossible to register on a first watch. For example, a certain explosion winds up having significant value, but in the context of the scene, it happens so fast and takes on a somewhat madcap quality, making it silly and forgettable.

Similar questions, believability issues, and mishandling of important details crop up throughout the entire film. In an instant, Tony and Jarvis figure out where to go to find out more about The Mandarin’s attacks and when Tony gets there, there just happens to be a woman who happily hands over a file that fills in the rest of the holes. Then there are these certain super soldiers who appear to only die via explosion or Iron Man blast, yet a couple manage to walk away from fiery attacks. Why does Hall’s character make a plot changing decision towards the tail end of the movie, what was the point in having Colonel Rhodes (Don Cheadle) go to Pakistan and not just to a stateside location, and did the vice president (Miguel Ferrer) have any value at all? The answers to these questions very well may be hiding somewhere in the 130 minutes of screen time, but as someone who doesn’t know much about the “Iron Man” source material and only had the luxury of catching this film once, those questions linger.

However, all of these issues aside, “Iron Man 3” certainly does suffice. Downy, as usual, is at the top of his game as Stark, and Black gives him some notably meaty material to sink his teeth into this time around. The anxiety issue was a smart play as it makes Tony more relatable than ever. Sure he still has an endless bank account and flies around rescuing people from midair plane disasters, but the guy is also deeply freaked out by the realization that there’s life beyond earth – just as any person would be. Black also beefs up Tony’s connection with Pepper (Gwyneth Paltrow) and not just in terms of the status of their relationship, but also how it affects Tony psychologically. Whether it’s a parent, child, spouse or friend, hopefully everyone has someone they’d risk it all for and now more than ever, that passion is radiating from Tony and it’s fascinatingly endearing and also a little troubling.

Paltrow also gets a cut of the action in this installment and Pepper’s combat scenes are some of the more joyously satisfying moments of the movie. On the other hand, Black did get a little carried away with Jon Favreau’s character. Happy Hogan does serve as an effective motivating vehicle for Tony’s new mission, but it’s a point that could have been made faster and with far less recurring jokes. Cheadle finds himself in middle ground. Rhodes has absolutely no arc this time around, but still functions as an enjoyable sidekick.

As for the newcomers, Kingsley is definitely the big winner and for reasons that will go unexplained here, but will be easily identifiable when you watch the film. Guy Pearce delivers a solid performance as Aldrich Killian, but the fact that he’s involved with the film’s more technologically advanced elements and most are a little too weak to truly believe, makes the character’s goals and intentions too slight to pack the punch they need. Maya suffers in a similar fashion with her objectives wavering so often, making them and her nearly impossible to track. In a world where all the big kids get to play with war-ready armor and super soldier solutions, Ty Simpkins offers a breath of fresh air as Harley Keener, a kid who gets to meet Tony and Iron Man in the flesh. There are hints of cute kid syndrome every now and then, but Simpkins and Downey share some quality chemistry, resulting in a number of the film’s bigger laughs.

Clearly “Iron Man 3” has ups and down, but this is a superhero movie and that intrinsic suspension of disbelief must power up full force. It’s nice when scripts like “The Avengers,” “Thor,” and the one for the first Iron Man movie do most of that work for you, but here, at least Black steps in to dish out some absolutely incredible action set pieces at a flawlessly swift pace to make “Iron Man 3” a sufficiently successful piece of the franchise. 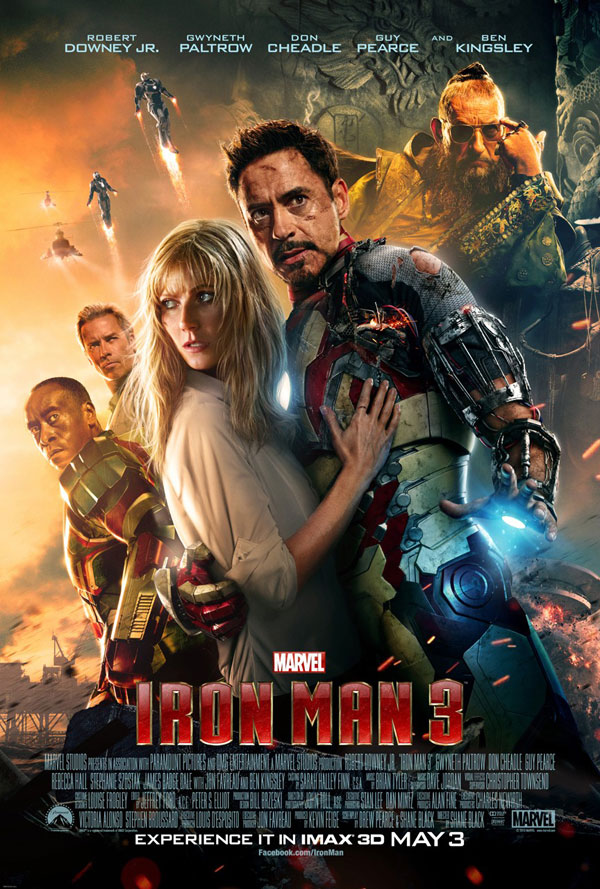