The rare sort of actor who can swing between Harold Hill-type independent film character work and credible, B-list leading man action hero, Aaron Eckhart has, in his latter incarnation, matched wits with aliens, terrorists and the disastrous effects of climate change. So it makes perfect sense that he’d want to tackle a chance to go full-on Jason Bourne. In “Erased,” he plays ex-CIA agent Ben Logan, who discovers that his high-tech security job in Brussels has been a sham. Marked for termination, Ben escapes with his teenage daughter Amy (Liana Liberato), and tries to stay one step ahead of his dangerous adversaries while also unraveling a wide-ranging international conspiracy that may trace back to an old agency colleague (Olga Kurylenko). For ShockYa, Brent Simon recently had a chance to speak to Eckhart one-on-one, about “Erased,” his love for his iPhone, his next projects, and the Filipino art of stick-fighting he’s mastered. The conversation is excerpted below:

ShockYa: As someone who recently had an afternoon sacked by the Internet going down, I’m jealous of Ben’s on-the-fly utility. His entire life is erased digitally, and he’s just like, “Oh well,” and goes about re-jiggering things.

Aaron Eckhart: I’m sure that’s happened to people. And sometimes you’d want your life to be erased, because of everything that people say on Twitter and Facebook and stuff, and wish they hadn’t — they would love to go back and erase it all. Sometimes it could be a blessing.

ShockYa: Do you feel super-plugged in, and are you technologically dependent?

AE: Well, I certainly am, but on the other hand I don’t have to be, and I wouldn’t miss it at all. I would miss the Internet, definitely. I love the Internet and my iPhone, and because I travel all over the world and now because you can stream from your sports radio talk shows and all that sort of stuff it really makes life easier. But I wouldn’t miss a lot of the other stuff.

ShockYa: But there are no mysteries in conversation anymore, because if you hit that awkward silence where someone can’t remember a book or song title, instead of a gap and the talk spinning off in a new direction, someone just checks their phone.

AE: But isn’t that so wonderful? A friend of mine just came down with blood clots in her heart, and in her lungs, and almost died last week. So I was in the hospital. And you can educate yourself so quickly, so there are no excuses anymore. If somebody’s ignorant about a subject or needs to know something, it’s really on them, because it’s all out there on the Internet. And for an actor, the Internet is such a wonderful resource, and YouTube especially — because let’s say your character does something that you’re not familiar with, it’s all out there, and you can really enrich your performances through (quick online research).

ShockYa: I feel like my brain would have melted if texting and the iPhone had been around when I was an adolescent.

AE: When we were making this movie Liana and I had a really good relationship, and I would always just look at her and ask her what she was thinking. I’d say, “Don’t question yourself, just tell me what you’re thinking.” But I just don’t know what [kids] are thinking anymore. I think the Internet has made everyone a little bit more bold — as far as texting and stuff like that. I think people ought to take it down a notch and not reveal so much about themselves. But I don’t have kids so I have no experience and I have no idea what kids are thinking about. I can only relate it to my own existence, which was tortured. Thank goodness for Pink Floyd.

ShockYa: So much of “Erased” hinges on the gulf — or lack thereof — in the relationship between Ben and Amy. She finds out this incredible fact that she didn’t know about her dad, but is able to roll with things, and even help him. Even more than most movies, for this film to work it seems you really had to find the right young actress.

AE: I auditioned I think four actresses, and Liana got the part. And (with younger actors) the first time you see them on set, or even before, in rehearsals, you have to start nurturing that relationship, and become their friend and be interested in them and finding out who they are and what they like. (It’s about) creating a level of trust there off-screen that bleeds onto the screen. You’re working all the time in that respect. At the end of the movie, it’s my greatest compliment when she jumps in my arms and says, “You’re crazy but I love you,” because it worked. When you can have a honest relationship — and not a real-life parental relationship, because she already has parents, and they’re there — but a structured friendship. You need to be her friend, and she needs to be your friend. So you have long conversations about what’s interesting to her — boys, school or where her career is leading her, or what her dreams are, and build that bond. That’s the most important thing. The action stuff is nice, but what all the stuff relies on is relationships, and there’s no greater bond than a parent and child.

ShockYa: I liked, too, that “Erased” endeavors to transcend the clichés of angry parent-child relationships.

AE: Yes! And we had to work on that. There were times in the script where she was flipping me off at the breakfast table, and I said, “No, you can’t do that — you have to always have respect and want these people to be together. You never want the audience to look at Liana and say that she’s a lost cause. She’s always worth fighting for, and the relationship is worth fighting for.” That’s what the movie lives or dies on.

ShockYa: I’ve read Peter Bergen’s book, “Manhunt,” and a lot of other books that delved into decade-long dismantling of al Qaeda, and just CIA operatives in general — both analysts and those in the field. How deep into the weeds did you have or want to go with research for this role?

AE: Deep. I met CIA officers and read every book that you’re talking about. I went and read every CIA novel ever written, I think. I’m into this, I love this sort of intrigue. I’m producing a movie right now, and we’re knee-deep in this stuff, too. So I love it, I love to listen to the stories, and when done right it’s just the highest form of entertainment. (pause) I guess Shakespeare’s higher, but who cares? I really dig it, and to have this movie set in Europe too is a bonus, because that’s where it all took place, especially during the Cold War, and that’s where I grew up, so it’s an added sort of flavor. These are people that when they’re doing their jobs right are putting their lives on the line, it’s high-tension — meeting in the dead of night, doing dead-drops, getting people out of places, taking risks, having affairs, lying for a living. I wanted to get that into the movie as best I could.

ShockYa: And what about the film you’re producing now?

AE: It’s a father going into the jungles of Colombia and having to get his daughter back, so it’s in a lot of ways similar to this, but also much more hardcore. I had my time on “Divergent,” and am out of that. And I also have on deck Stuart Beattie’s “I, Frankenstein,” which is a contemporary look at the historical figure — the monster Frankenstein. It’s an imaginary world, about good and evil and gargoyles and demons and this Filipino art of stick-fighting called Kali. (laughs) You put all that together and you have “I, Frankenstein.”

ShockYa: Wow, I wouldn’t necessarily think Aaron Eckhart when I heard about the Filipino art of stick-fighting.

AE: (laughs) No, you wouldn’t, but I put six months training into it, so it’s all in there. 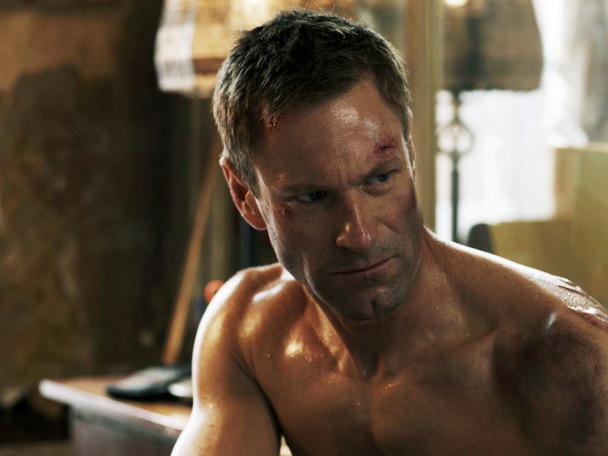