Title: The Kings of Summer

“The Kings of Summer” boasts the innocence and carefree nature of younger years right alongside the profundity of adulthood, resulting in an experience that functions both as an entertaining romp and tender tale of growing up.

Since the passing of his mother, Joe’s (Nick Robinson) relationship with his father, Frank (Nick Offerman), has been more strained than ever, the two not being able to see eye to eye on a single thing, even a game of Monopoly. Meanwhile, Joe’s best friend Patrick (Gabriel Basso) has parental problems of his own, but in a much different respect. His mother and father (Megan Mullally and Marc Evan Jackson) smother him, drowning him in juvenile affection and vegetable soup. Desperate to not become his father, Joe decides that their only shot at gaining a sense of independence and becoming the men they want to be is to get out from under their parents’ roofs and build their own. Joe, Patrick, and the school oddball, Biaggio (Moises Arias), take to the woods, find a clearing and build their very own home.

“The Kings of Summer” strikes a unique balance between coming-of-age charm, comedy, and honest drama, and it’s the constant give and take between all three that makes the film work particularly well as a whole. There are moments specifically rooted in humor and others aiming to earn weighty emotional arcs, but director Jordan Vogt-Roberts and writer Chris Galletta always keep all three elements in play, resulting in something that’s both pleasantly enchanting and rather poignant.

Just about every character in the film is highly successful, but Offerman, in particular, highlights that distinctive blend more than most. One minute Frank’s an absolute jerk, but the next his behavior treads into snarky territory and then the layers start to strip away and we get a loving father with some very real, touching emotions. Robinson certainly hold his own, but Frank’s transition serves as an ideal backbone for Joe’s.

Vogt-Roberts and Galletta play their cards right by opening with Frank in jerk mode, allowing easy access to Joe and his cause. However, rather than merely make Joe the straight man to root for, he’s peppered with enough flaws to feel like his father’s son, but also entice you to root for him for all the right reasons. It’s not just about making it out into the woods to get some much needed space from Frank; it’s also about simply having fun and then, on the other hand, about becoming a good person, too. Similar to Offerman, Robinson finds immense triumph building and then playing with the traits that make Joe who he is. He’s a kid with sass that knows how to push his dad’s buttons, he’s a devout best friend, and a kid with a crush, and Robinson manages to sell an arc for each individual issue while also keeping them connected and serving the character as a whole.

That’s also a particularly noteworthy accomplishment on Galletta’s end, too. “The Kings of Summer” is full of memorable moments, moments that stand on their own that you can look forward to during repeat watches, but even then, just about every single thing in the film, from grander fights to minor props, also serve the larger experience. Joe’s thing for Kelly (Erin Moriarty) isn’t just your typical high school crush; it develops into something that adds a layer to his friendship with Patrick. Frank’s frustration with a local restaurant’s abnormally large wontons isn’t just a scene filled with wildly amusing and unforgettable banter; it winds up marking a major turning point for Offerman’s character. A ruthless game of Monopoly doesn’t just shed light on Joe’s relationship with Frank; the game returns to make a mark regarding Joe’s connection to his father, his relationship with Patrick, and the status of the boys’ new life in the woods. Very little happens in “The Kings of Summer” for the sake of earning a laugh or pushing the narrative forward.

Every now and then you tread into territory that could use a little more depth, but for the most part, “The Kings of Summer” is the result of thoughtful and effective filmmaking through and through. 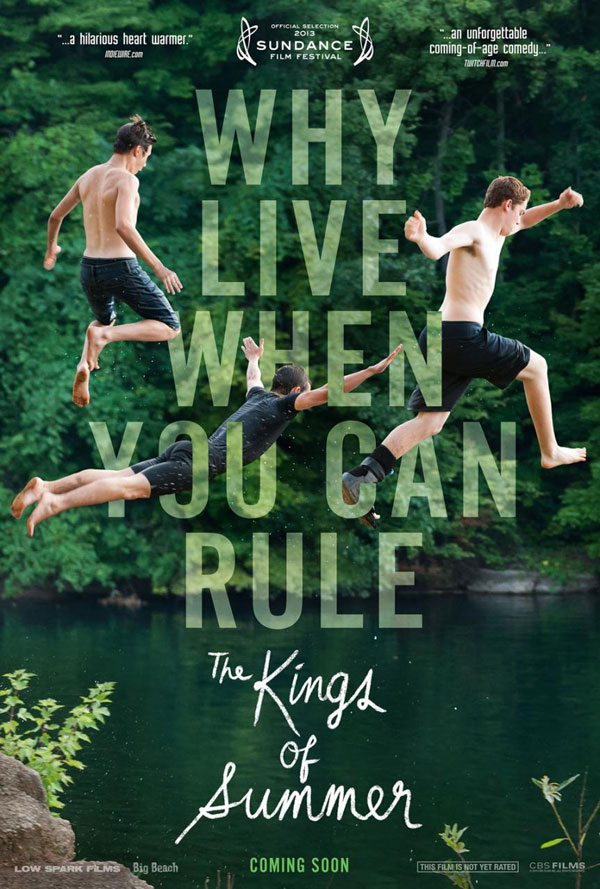 The Kings of Summer Poster