People can at times simultaneously feel conflicting emotions of love and hate towards any person they have an intimate relationship with, particularly their parents. While it can be difficult to understand other people’s motivations, people learn to come to terms and understand the actions other people take as they mature. This is the intense motivating factor in director Daniel Algrant’s new drama, ‘Greetings From Tim Buckley,’ which is based on the true story of the title musician. In the film, Penn Badgley plays Tim Buckley’s son, Jeff, who doesn’t fully understand the respect his late father garnered until he truly looked into his father’s past. It isn’t until he meets Allie, portrayed by Imogen Poots, who’s working at the show, that he feels inspired to reconnect with his past and appreciate his father’s life.

‘Greetings From Tim Buckley,’ which is now playing in select theaters and is also available on VOD, follows young musician Jeff Buckley, as he rehearses for his public singing debut in 1991 at a Brooklyn tribute concert for his father, the late folk singer Tim Buckley. As he struggles with the legacy of a father he barely knew, Jeff finds solace in a new relationship with an enigmatic young woman, Allie (Poots), who’s working at the show. As they explore New York City, their adventures recall glimpses of Tims’ (Ben Rosenfield) fame in the 1960s, as he left his wife and young son at home and drove across the country, as he was on the verge of stardom. Jeff, who later became one of the most beloved singer-songwriters of his own generation, struggled with his estranged father’s fame, as he prepared for the legendary tribute show that launched his career.

Poots generously took the time to sit down during a roundtable interview during the 2013 Tribeca Film Festival in New York City to talk about ‘Greetings From Tim Buckley.’ Among other things, the actress discussed that she was drawn to the script, as she felt it cleverly showed the process of making music; how she was a fan of Jeff’s music before she began shooting, but listened to Tim’s songs as well to get an understanding of what was going on at the time of his success; and how she developed a natural chemistry with Badgley on the set.

Question (Q): How did this film come to you?

Imogen Poots (IP): I read the script and fell in love with it and Skyped with Dan, and the day he learns how to use a computer will be something else. But we had a Skype session and it was like my shoulder, because we’re both useless, but we really got along. I just love his ideas and his energy and his passion for this film, but I just adored the way this script was written. It was very loose and had a lot of time in the script, and I thought it was really clever in terms of what it is to make music. I think it really nailed that. A lot of people wouldn’t like this film and that’s kind of great too.

Q: Had you ever heard any of Jeff Buckley’s music before?

IP: For sure, I was a big Jeff Buckley fan. Tim Buckley I wasn’t as aware of, but I got to know him pretty quick when we were making the movie. That bunch of musicians Tim Buckley was associated with at that time was amazing. Once I started listening to his music, it really opened up a whole variety of things that were going on around that time.

Q: Did you listen to all the records of both Tim and Jeff?

IP: Absolutely, and more Tim during the film because I thought it was appropriate. I also I prefer Tim Buckley.

Q: How intimidating was it for you at actually sing their songs in the movie?

IP: Oh yeah, that was kind of on a whim. We really didn’t give that much thought beforehand and then Dan was like-“What can we do that would be authentic enough and have gravitas to bring Jeff Buckley back to do this tribute concert?” We thought the singing would be a great thing to do that acapella. We did that as a night shoot and it was kind of a strange song that Dan wrote.

Q: Are there any records of the concerts that you could look at and study?

IP: Yeah, there was footage of it. But in a way it’s very difficult to find enough information about someone, especially someone like Jeff Buckley. It’s hard to find information even about someone like Hendrix, who was so prolific and died at the same age, while Buckley’s fame was more fleeting. It is difficult to find the real stuff, the real deal but you just got to go from what you can.

IP: I love Townes Van Zant a lot and Jackson C. Frank and a lot of old folk music for sure. I suppose my favorite bands are like The Smiths. Music is something really important to me because it’s passed down to you through parents or family or lovers, but it’s really something that you can find ownership with in an amazing way. I’m drawn to a lot of country and western music, which is kind of tragic at times, but it’s great because it takes you to another place completely.

Q: Did your parents remember that type of music and fill you in on their recollection of that time?

IP: Well, I don’t think music is really their thing. They were more about books than music. They have a ‘Pogues’ record lying around which is great, but it was probably an accident. They’re really intrigued as to what I’ve been doing with this time.

Q: Do you have a song that’s really important or poignant to you?

IP: Yeah, it’s a song called ‘This is The Day’ and it’s just exquisite. It’s one of those songs that comes on in a bar and I’m like, “That’s my song!” It’s kind of amazing how music can do it. It’s a release.

Q: What about singing-are you still recording?

IP: Absolutely not. But I really enjoy doing it. It’s really wonderful, but if you don’t take any of it too seriously, it was be ok.

Q: Now you have a whole group of musicians who you could work with.

IP: I know, it’s kind of wild. We met the songwriter who co-wrote ‘Grace’, Gary, what a character. It’s just fascinating. All of these guys started off together obviously and Jeff Buckley was the one who went and did it. But I think it’s interesting thinking of all the different egos, and they’re quite candid about it. It’s interesting hearing about the inside of it all. They were all kids and one of them did it while the others were doing their own thing. It’s interesting how honest they were.

Q: Did you met with any of the other of Tim or Jeff’s bandmates?

IP: I didn’t meet with them. Penn met with quite a few guys who were close to Jeff Buckley, which is quite a bold thing to do because it’s his take on it. It’s his role for this movie, so for it be so exposed to all those viewers is quite a thing.

Q: Is this an area and time that you would go back to and live in?

IP: Oh sure. I was two when the tribute concert took place, which is great and wild how it all works out. I really love the 90’s. I love the music from then for sure and to go back to New York then would be a really wonderful thing. Even if you’re reading something like just kids and everyone is in love with the idea, but no one will go back there. It’s great.

IP: The 60’s is funny. I love the 60’s but it’s an era that is untouchable now, it’s so long ago. I love doo-wop music because it’s so innocent. You had to be of a certain age to indulge in it or otherwise you feel strange. The 60’s are cool.

Q: Did you find yourself going back and forth between these two eras and learning about both?

IP: Totally, and the cool thing is it took place in the same city. Really there’s three decades between Jeff [and Tim]. In terms of the folk music, it’s amazing the progression that had actually happened. Jeff was far more theory, and you can hear the Irish influence in Tim Buckley’s folk music. It’s more like Van Morrison in what he was doing. It was good to have that balance and to see what really was informing Jeff Buckley’s kind of music.

Q: How was it to work with Penn? How did you make that chemistry just click? Had you known him from before?

IP: No, and I’d never seen his show. They were saying, “He is Gossip Girl,” I was like, ‘What are you a transsexual in the show?’

But I think in terms of chemistry with someone, it’s just electric and you can’t understand where it’s coming from. There are some people and you’ll have zero chemistry with them, but Penn and I just really got along and were really excited to do the film.

I remember a specific scene where we leave the record store and we started running and he turned to me and was like, “God, it’s so good to move!” I kind of knew what he meant; we have so much space in this city and Dan was always running around with the camera. It was quite organic and could have been scrambled, but was a fun process of making the movie. 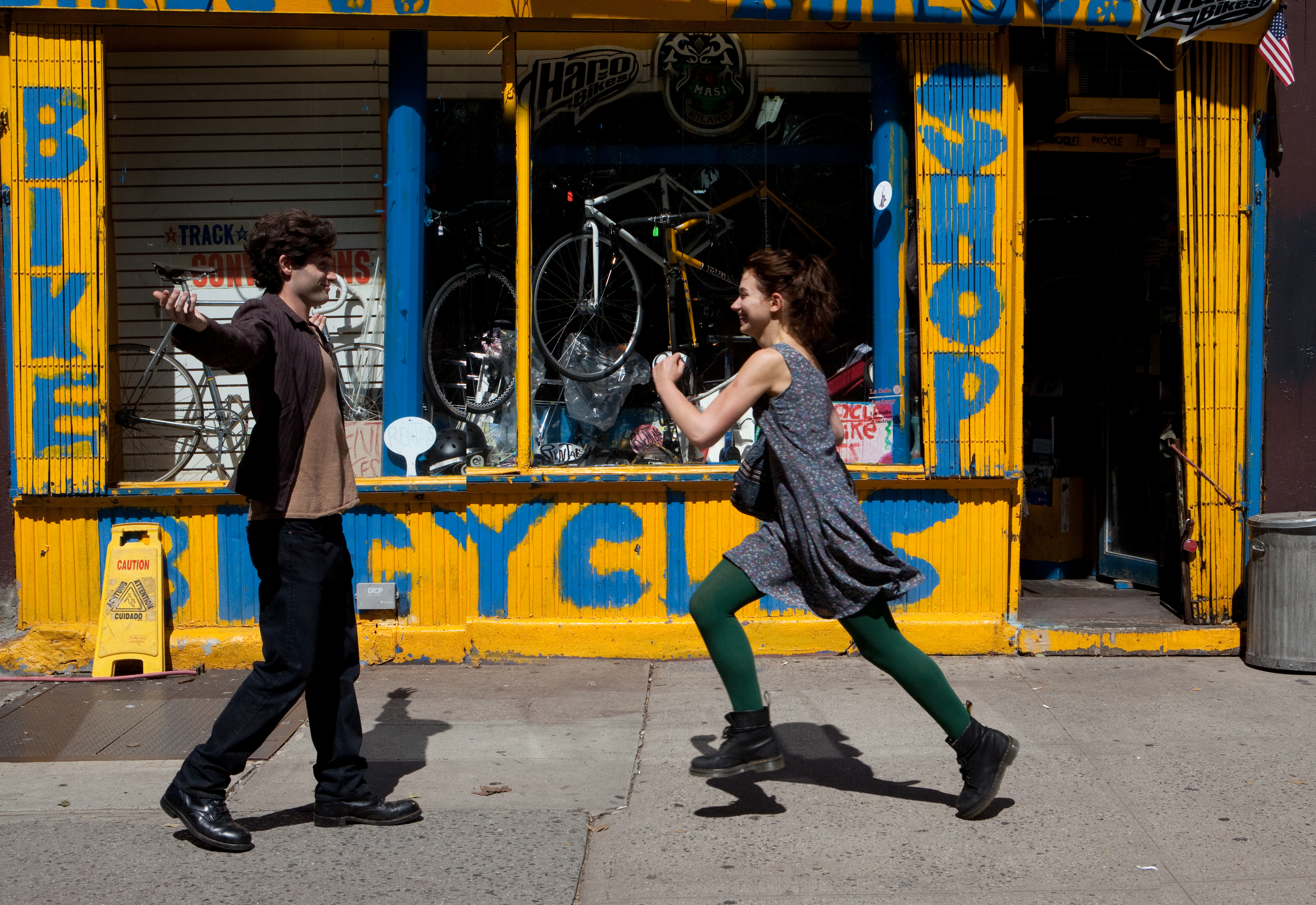