In a society where people are constantly struggling to make ends meet, even if they have a high drive and ambition to succeed, they’re often forced to ruthlessly fight for the life they desperately seek. The struggle to also maintain an outward appearance that their lives are fine can push them over their limit. That’s certainly the case with the title character in the new independent horror thriller ‘American Mary,’ which was written and directed by twin sisters Jen and Sylvia Soska. The story intriguingly balances the ideal world of modern medicine and top notch surgeons, with the underground world of extreme body modification enthusiasts.

‘American Mary,’ which is now available on VOD and is playing in select theaters, follows a medical student, Mary Mason (Isabelle), who is growing increasingly broke and disenchanted with medical school and the established doctors she once idolized. The allure of easy money sends a desperate Mary through the world of underground surgeries, which leaves more marks on her than her so-called freakish clientele.

The Soska sisters generously took the time recently to talk about writing, directing and filming ‘American Mary’ over the phone. Among other things, Jen and Sylvia discussed how finding information about body modification online convinced them to pen and helm the horror thriller; how Eli Roth supported and mentored them as they were developing the film; and how Isabelle’s emotional capability convinced them to cast her in the title role.

ShockYa (SY): You co-wrote the script for the new horror thriller, ‘American Mary,’ together. Where did you come up with the idea for the story?

Sylvia Soska (SS): I first stumbled upon body modification on an April Fool’s prank online, but I didn’t know what it was. It featured two identical twin brothers who swamped limbs. One had one of his arms amputated and grafted onto his brother’s chest plate. The other brother had one of his fingers removed and put it on his brother’s finger, so he had an elongated finger. Since they’re genetically identical, the limbs didn’t get rejected.

With the photos, there was also a letter from the brothers explaining why they did this. They said, “Only an identical twin would understand wanting to have that closeness with his brother.” That scared me more than anything that has scared me before. My mother always taught me that if something frightens you, that’s because you have a lack of education on the subject. So learn more and you won’t be scared anymore.

So Jennifer and I became obsessed with body modification. We would go online and pretend to be different members of the community who had different procedures. We would go on the message boards, and that fear turned to admiration and digging it so much. I really love that I was introduced to body mod like that. I wanted to give other people that kind of experience.

Jen Soska (JS): Yeah, at the time we were researching body modification, we never indented to make a film with it. But during the release of our first film, it’s very independent and called ‘Dead Hooker in a Trunk,’ it was such a difficulty to get it out there and released and seen. We were virtually two unknown filmmakers with an independent film.

We had a friend ask us what we were working on next. He gave us the amazing advice that “You need to take that effort you put into this film, and put it into your next film. What are you working on next?”

At the time, we didn’t have anything. But when in doubt, lie, and we told him we did have a script. We gave him a list of ideas that we thought we could write, and one of them ended up being the one about a medical student who became involved in body modification.

SS: That friend was Eli Roth, and he has been really kind to us and has been a mentor. That’s exactly why in the end credits, you see the film’s dedicated to him. Without that kind of advice and support, we would have never even have written the script in the first place.

Later, we did come clean, and said, “Sorry, Eli, but we totally lied about that.” He said, “Well, you were able to pull it off.” Then, when we went into production, he was always there, giving advice and was very supportive. He’s just one of the sweetest people, and I can’t say enough good things about him.

SY: Did you receive any support or ideas from Eli once you actually began shooting?

JS: When we first did our film, ‘Dead Hooker in a Trunk,’ we were inspired by the Quentin Tarantino-Robert Rodriguez collaboration, ‘Grindhouse.’ We initially made that film as a faux trailer, and when it was finished, we ended up making the feature-length version. We sent the trailer to all the directors involved, but never expected to hear back from anybody, because they had already done their job by inspiring us to get up and make a film of our own.

Then two days later, we heard back from a Eli Roth on MySpace. We thought, there’s no way this is really Eli Roth, but it was. He’s become such a good friend and mentor to us.

We didn’t receive any information on the script, but he gave us invaluable advice, as to working in this business. One part of directing is being able to write and know how to make a film. But a massive part is knowing how to manage the personalities that you’re working with, and to keep going and keep your artistic vision complete. You have a lot of other people with ideas and suggestions.

SS: A lot of people said, “If you’re such good friends with Eli Roth, and he’s such a mentor, why don’t you have him produce and present your movie?” But it’s the struggles that you go through that make you a filmmaker. You don’t want to piggyback off of someone else’s career.

We were very lucky that he was able to give us advice, and we were able to use that advice to make our films and move forward. It’s really cool-(the third week of May) his film, ‘Aftershock,’ was number seven on the iTunes top horror list, and ‘American Mary’ was number eight. We’re dying, even for one minute, to get above him.

SY: Besides writing the script together, you also co-directed the film. How did you approach directing ‘American Mary’ together? What was the process of splitting the directorial duties together?

JS: I’m very lucky to have been born with an identical twin, and one that I get along with. We’ve always been collaborators. In whatever business we’ve done, we’ve always worked together, and we were in the same classes together. So working together is absolutely seamless.

When we work and write, we completely dive our responsibilities and duties. We do tag-team writing; when one of us is writing, the other is playing video games, and then we switch off. Then we go over what the other has written, and we laugh at the obviously wonderful jokes in there. It’s never that one of us is fighting the other one. We have a very direct vision that we’re both very much working towards.

SS: The nice thing is, even though we’re identical twins, and we look the same and have the same interests, we’re very different people. Jennifer and I always joke that she puts the heart in, and I rip it out. It’s nice because we complement each other and always push each other to do better. Since we’re sisters, sometimes we don’t take each other’s emotions into account. We just want to focus on the work and moving forward, which is really a benefit.

JS: With ‘American Mary’ in particular, we had only 15 days to shoot and a limited budget. We never had an allowance to do reshoots or go over 12 hours a day.

Sylvia would always remain on set, and there are times on set when things go wrong. A director can be pulled in another direction and off production. One of the benefits of there being the two of us was that Sylvia could remain on set and continue working, and I could leave and manage the other problems that held up production.

SY: Katharine Isabelle plays the title character of Mary Mason in the film. What was the casting process for Katharine like for the role of Mary?

SS: Jennifer and I have been huge fans of Katie’s work since ‘Ginger Snaps.’ One day I got to meet her on the set of ‘Josie and the Pussycats,’ and she was really sweet to me. I thought, one day I’m going to work with that woman.

The role of Mary was actually written for her, as we kept watching her in films. I think there’s a bit of a glass ceiling for Canadian actresses. There aren’t that many great female roles being written, especially for Canadian actresses. A lot of the time, people are more interested in hiring a Hollywood actress, because of the different levels of clout with it.

It was so cool getting to meet her. I felt bad for her, because I had these unrealistically high expectations of her in every regard. I got to meet her, and we talked about the film. Our firs meeting, we met around 7 in the evening, and we were up until 5 in the morning, talking passionately about body modification and radical feminism. I knew I found the right actress for the role.

JS: Katie is one of those actresses that has that great quality. She’s done a lot of films, but her most famous one before ‘American Mary’ was ‘Ginger Snaps.’ That film came out over 10 years ago, but it has such a rabid fan base and huge following. When she did that film, she was just 17, going on 18. Even then, she had an amazing depth and emotional capacity.

The amount of emotions she can convey, and the subtlety that she does, is unlimited. If you take away her words, like we do at the end of our film, it’s all based on her subtlety and her actions with her eyes. The ways she can convey that is absolutely phenomenal.

She has this capacity for emotional depth, and she’s such a mature actress. The way she acts, she makes it look very easy. We didn’t know that at the time we hired her, but we had our suspicions, since we were watching her career for so long. She just blew us away with her performances. 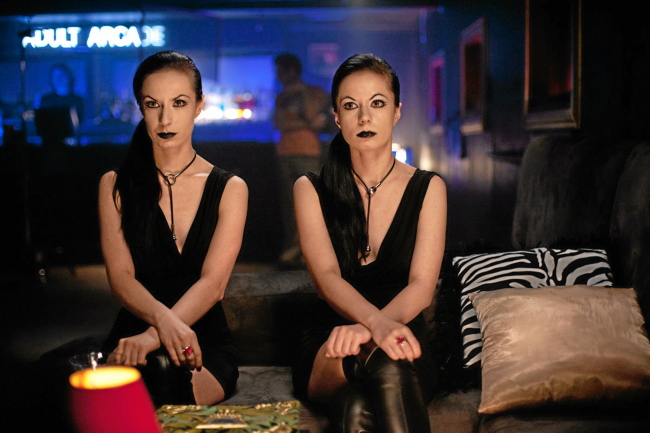