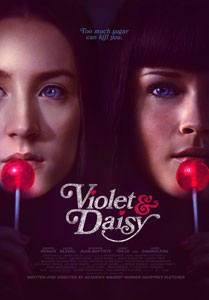 Prior to skyrocketing to fame courtesy of an Academy Award and “Precious,” Geoffrey Fletcher had another feature brewing, and one of an entirely different genre and tone at that.

“Violet & Daisy” stars Alexis Bledel and Saoirse Ronan as the title characters, a pair of best friends who also happen to be a team of teenage assassins. When they’re not gossiping about their favorite celebrity, they’re armed, dangerous, and meticulous about their hits. Locked and loaded, the girls frolic off to what they think will be a short and sweet gig, but it turns out that taking down Michael (James Gandolfini) is no easy task and not for the reason they’d expect.

With the film due for a June 7th limited release, Fletcher took the time to sit down and discuss the transition from this to “Precious” and back again, the challenge of making a film that mixes drama with comedy while infusing it with a fairytale-like quality too, making the decision to nix a digital format and shoot on film, and more. You can catch everything Fletcher had to say about making “Violet & Daisy” as well as an update on “Attica,” a film about the 1971 Attica Prison riot to be directed by Doug Liman, in the video interview below.