Title: Steve Chong Finds Out That Suicide Is a Bad Idea

A recent world premiere at the 16th annual Dances With Films, the evocatively titled micro-budget indie film “Steve Chong Finds Out That Suicide Is a Bad Idea” tries to put a bearded, decidedly fraternal spin on the whole “Return of the Secaucus 7” sub-genre, wherein young adults grapple with changes in life and their relationships. If there’s a certain easygoing charm to the movie, there’s also a lack of forward-leaning momentum or insight to make these characters stick to the psyche.

Mopey, would-be graphic design artist Steve (Stanley Wong, also editor on the project) has a slight crush on co-worker Alice (Jenn Foreman), but is unable to act on it — or pretty much anything else in life — due to a crippling insecurity and low self-esteem. Fired by his cousin from his job as a chef at a sushi restaurant (in an amusing bit, Steve disarmingly says he’d just “rather not” have the talk that he knows is forthcoming), Steve returns home and adds to his collection of chastising index cards. More intense self-loathing seems on the horizon.

Momentarily galvanized, however, Steve gather together a group of old friends — John (Joseph Sökmen), Chris (Owen Hornstein III) and Tom (Tyler Russell), the obligatory pussy hound — for a weekend of relaxation and reflection at his parents’ lake house. Drinking games ensue, during which a drunken Steve confesses that’s mulled over killing himself. The next morning Steve has no recollection of any of this, but his friends, unnerved, have to figure out how to react to this new information, as well as how to possibly integrate it with plans to bury the hatchet on some of their own issues and spend an evening entertaining Alice and her friend Gretchen (Jennie Freeman).

Scripted by Hornstein, from a story concocted by his other three male costars and director Charlie LaBoy, “Steve Chong” breezes along nicely, a kind of down-tempo riff on “The Hangover,” in which guys get together, imbibe alcohol and give each other some shit. (Fear not, neither tigers nor Mike Tyson make an appearance. Sadly, neither does Heather Graham.) Big-punchline jokes aren’t really on the agenda here, but rather comedy of awkwardness and humiliation rooted in grudges over an old love triangle and the like.

Unfortunately, while the title holds true in the literal sense, Steve is mostly a cipher, and interesting details regarding the other characters remain half-sketched. Most frustratingly, though, the film doesn’t really try to tap deep into Steve’s pathological shyness, or any of the cultural considerations that may inform it. So is it a comedy, or a drama? It’s sort of both, really, but without much punch or bite in either direction. Lacking much in the way of dynamism, the movie merely bobs along — pleasantly, for the most part, but ultimately forgettable. 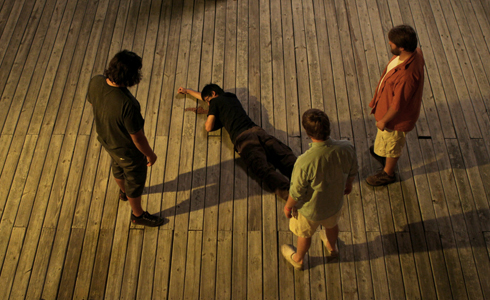