“Man of Steel” is like Superman taking a punch from a human; you feel nothing.

The film kicks off just as Krypton’s unstable core is about to decimate the planet. In an effort to ensure his race carries on, Jor-El (Russell Crowe) pops his newborn baby boy into a pod and ships him off to Earth. The pod lands in Kansas, right in the Kent’s backyard, and while Jonathan and Martha (Kevin Costner and Diane Lane) raise the boy as their own, they’ve also always known he’s not from here. In order to keep his origin a secret, Clark goes through school as an outcast, constantly getting picked on but unable to unleash his unearthly strength to fight back.

Now a 33-year-old man, Clark (Henry Cavill) moves from place to place, trying to keep a low profile. Trouble is, when he sees someone in trouble, he just can’t help himself. Finally Clark seizes an opportunity to learn about his real parents and home planet, but accessing that information also unleashes an unspeakable evil upon Earth, one that only he can stop.

There’s two different films here – a Clark Kent coming-of-age story and the battle against General Zod (Michael Shannon) and his cohorts. If you’ve got a taste for non-stop destruction, you’ll dig the latter, but if you prefer your superhero action with a little heart, you’ll likely take to the portions focusing on Clark’s young years. It’s only natural to prefer some parts to others, but in order for a film to work as a whole, there just has to be a degree of cohesiveness, and that doesn’t exist much at all in “Man of Steel.”

Rather than running with a straight narrative, David S. Goyer wrote a film that incessantly jumps back and forth between the past and the present. The flashback sequences are generally the more successful portions of the film, but even then, at some point enough is enough and we’ve got to focus on the task at hand. But that never happens so by the time you reach “Man of Steel’s” big climax, you’re too distracted to appreciate it.

An even bigger problem is the film’s lack of emotion. Per usual, Zack Snyder’s visuals are incredibly well composed to the point of being mesmerizing, but a pretty picture just can’t have a lasting effect if the viewer isn’t connected to the characters and almost every single one in “Man of Steel” is painfully wooden. Cavill gets away with it because it actually winds up selling him as someone who feels out of place and doesn’t know why, but that excuse doesn’t work for the rest of the cast.

Amy Adams is sadly the worst offender. There is absolutely no depth to Lois Lane whatsoever. Yes, Adams can point a finger at insufficient character development, but even so, her work here just feels dull, which is very unusual for her. Then there’s poor Richard Schiff and Christopher Meloni who are reduced to the cliché scientist and army colonel and absolutely nothing more. Laurence Fishburne finds himself in a similar position as Perry White. As presented in the film, Perry isn’t a person; he’s just the head of a newspaper.

The only characters that manage to transcend this issue are the ones with heart. Despite the jarring storytelling format, both Costner and Lane shine because the Kents are absolutely oozing with affection for Clark, and you believe it. Crowe churns out the film’s most successful character for a similar reason. “Man of Steel” begins with Jor-El’s efforts during the demise of Krypton and it’s a stellar opening sequence in every respect. The visuals and CGI are on point, it’s a compelling mini narrative, and Crowe makes for a wholly enchanting lead. Should “Man of Steel” demolish the box office and earn a sequel, a Jor-El-centric prequel is the way to go.

Snyder had the right idea when approaching specific portions of this film, but that only left “Man of Steel” with a handful of spectacular sequences like the opening and that, in turn, demolished the full feature’s pacing. Even with an overdose of action, “Man of Steel” is kind of boring. Every now and then you’ll get swept away by a certain scenario, a personal favorite being a tornado sequence, but then there’s more of Clark’s moping, a weird church scene, Amy Adams playing reporter, or some military babble, completely extinguishing the momentum.

And then even once you do get to the tail end of the film, which essentially showers you in extensive destruction, that becomes rather boring, too. The fighting looks great, but how many times can we see a building crumble or Superman zip through a fiery setting before enough is enough? But even more detrimental than the repetition is the fact that it’s hard to care. There’s one instance of peril in “Man of Steel” that will have you at the edge of your seat, pained by the thought that someone’s about to bite it, but it’s part of a flashback so thanks to the odd formatting of this film, it has absolutely no impact on the current threat.

If only $225 million could buy a film some emotion, too. 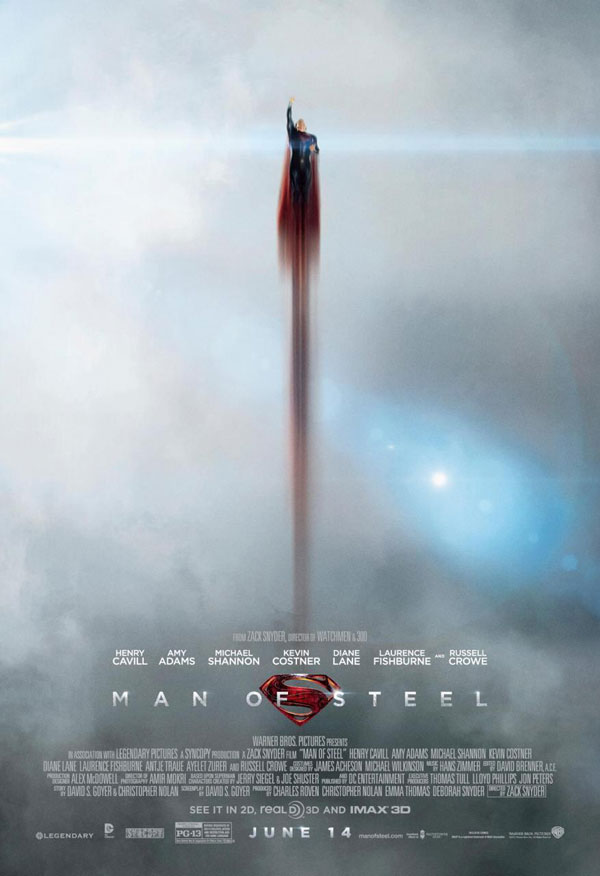