They say that traveling is broadening, yet most people in the world may have never left their villages, let alone their countries . Do you remember how you felt the first time you went a couple of hundred miles outside your neighborhood? If you’re urban, you recall the first time you saw cows in a huge, empty field. If you’re from a small town, you’re amazed at the sights and sounds of New York. If you’ve never been outside the Northeast, you recall your feeling when you saw your first palm tree, and on your maiden trip to Europe you are confronted for the first time with people who do not speak English.

What’s the farthest you’ve ever been? If you’re from New York, you can’t get any farther than Perth, Australia, exactly halfway around the world. If you’re an astronaut you may have set foot on the moon. Mars? Coming up in the future. How about Jupiter? Getting there would take at least a year since it’s more than four times farther from Earth than the sun. Add a few more miles to get to Jupiter’s moon. What would be the purpose of going? Why, to find out whether we on Earth are alone in the solar system, perhaps in the universe. Any signs of life on that subfreezing planet might be considered, as one character in “Europa Report” narrates, the greatest achievement in human history, even if the life-forms were just some algae. Why would that be? Beats me; you’d have to ask her.

“Europa Report” is the un-alien type of movie designed for lovers of sophisticated sci-fi rather than for those who saw Sigourney Weaver twenty times in “Alien.” The way director Sebastián Cordero designs the film, he wants us in the audience really to believe what is going on, and you don’t get to believe when you have octopus-like creatures emerging from your stomach. The design is beautiful: scenes of Jupiter’s moon with the planet itself visible as though you were on Jupiter and looking at its moon are cool enough that you don’t want to waste time seeing this on your small screen DVD. The computer graphics keep the six astronauts company beaming months, days hours, minutes and seconds. The space ship is well equipped (filmed in Brooklyn, NY) with enough comfort for the half-dozen travelers, who of course like to play “float in the air” to demonstrate that we too would fly except for the “theory” of gravity.

There are few personal conflicts among crew members but since all movies like all theater and literature must have conflict, you can bet that the folks run into trouble 390 million miles from home. One astronaut goes outside, is contaminated, and is refused re-entry as his admission would mean that everyone dies. Another dies while picking up proof that some simple creature live in the water below the ice, since we all know that if water exists, there is a chance for life within.

However, the character are generic, which means that the audience may not care when some or all would die. Even more important, the action takes places entirely within the ship, like a futuristic “Das Boot,” the characters speaking technical jargon that may not be understood the audience. The picture lacks the imagination of “2001: a Space Odyssey,” wherein right the beginning we are captivated when a cave man flings a club into the air, the weapon’s turning into a space ship. And there’s nothing in the music soundtrack that can compare to “Also Sprach Zarathustra,” which Stanley Kubrick used to great effect.

If you’re OK with some snazzy shots and don’t mind the lack of a compelling narrative, go with the picture. Otherwise, if you’re into space travel, see “2001: A Space Odyssey” or Robert Zemeckis’s “Contact” for a better take on the search for extraterrestrials. 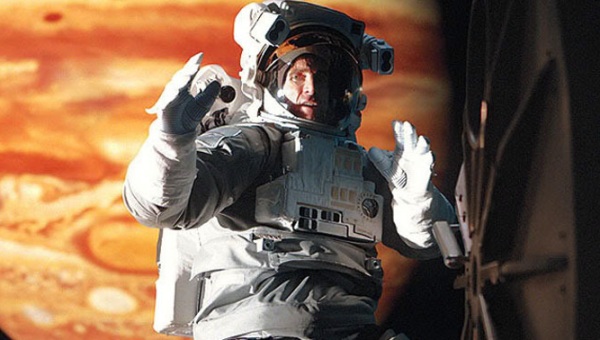