Arthur Hiller’s “Love Story” meets Nigel Cole’s “Calendar Girls” in a story that could fit easily into TV’s Hallmark Hall of Fame. That’s not a compliment in this case. Paul Andrew Williams’ film patronizes older people from a lower-middle-class English background by virtually asking the audience to say, “Oh, how cute; men and women in their seventies and eighties are singing heavy metal and bobbing with the music.” And when the folks (tee-hee) belt out Salt-N-Pepa’s 1991 song “Let’s Talk About Sex,” we think, “Oh, wow, people in their eighth and ninth decades of life are singing about something these grandmothers and granddaddies never engaged in. How liberated!”

In the saccharine department, “Unfinished Song” is about the loving relationship of the morose Arthur (Terrence Stamp) and his chipper but swiftly dying wife Marion (Vanessa Redgrave), the latter showing everyone, but particularly her husband, that neither age nor ill health stays an energetic human being from the completion of her spirited duties.

The story line is familiar and woefully predictable, even the dysfunctional relationship between Arthur and his son James (Christopher Eccleston), and of course the optimism and energy of Arthur’s eight-year-old granddaughter. We don’t really find out why Arthur and his son are so conflicted that in one scene Arthur tells the younger man that it would be better if they did not see each other again.

If you’re on the edge of your seat wondering whether father and son will get together, is you can’t wait to find out whether the choral society will make the finals and go home with a trophy, if you have doubts that Elizabeth (Gemma Arterton), the pretty young music teacher will get the oldies up to vocal shape, if you wonder whether Marion will be newly diagnosed with just the flu and not with cancer, then this is the movie you’ll want to see.

Terrence Stamp saves the production from desolation with a terrific performance, and Elizabeth is lovely to look at. However, the many songs of the choral society, whether heavy metal or ballad, are knocked out without a smidgen of harmony. In other words “Unfinished Song” may be a crowd pleaser provided that the crowd is notparticularly demanding. 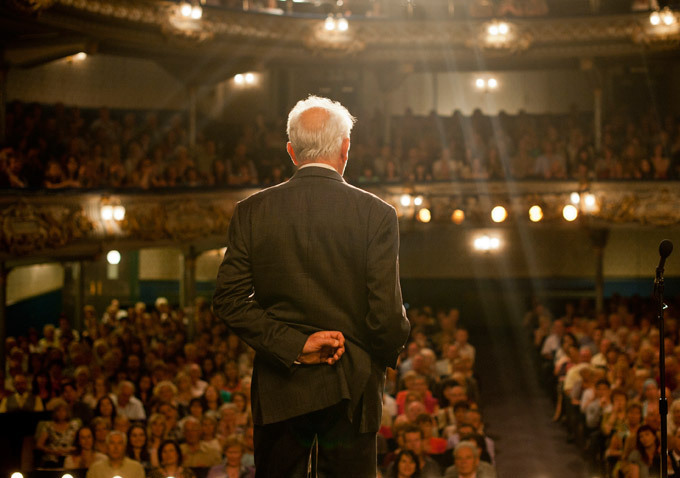