The idea of an Earth-bound fistfight between a foul-mouthed God and equally lewd Satan, complete with shots to the groin, sounds anarchic and wild. And certainly the participation of the roster of comedically gifted talents listed above inspires some level of buzzy expectation. But in a post-“South Park” world, lazy execution of a ribald, potentially controversial concept will not suffice — especially not when the apocalypse is being handled with much more wit, vim and verve just across the megaplex, in the form of “This Is the End.” Thus the judgment of hearty disappointment falls upon “Rapture-Palooza,” a yawning, slapdash, would-be laffer in which a twentysomething Seattle native grapples with the discomfort and awkwardness of finding herself the object of the Anti-Christ’s affection.

After a couple billion people are raptured up to heaven, Lindsey (Anna Kendrick) and her boyfriend Ben (John Francis Daley) find themselves left back on Earth, with all the other heathens. The young couple tries to continue to lead some semblance of a normal life, amidst the downpours of blood, pot-smoking wraiths, and cursing crows and locusts, but it’s not that easy. Ben’s sycophantic father (Rob Corddry) has gone to work for the Anti-Christ (Craig Robinson), a garrulous taskmaster born Earl Gundy but who now goes by the moniker of Beast. When he whimsically settles on Lindsey to be his new bride, threatening to kill everyone she knows unless she assents, Lindsey and Ben concoct an on-the-fly, four-part plan to foil the Beast and cage him for 1,000 years.

Written by Chris Matheson and directed by Paul Middleditch, “Rapture-Palooza” locates a lot of its comedy in polarity. The Beast is a filthy-mouthed asshole who sings songs about his penis and spouts coarse come-ons like, “I bet your vagina tastes like pistachio mint ice cream” (and much worse). Shy-gal narrator Lindsey, meanwhile, is removed in a what-are-you-gonna-do sort of manner, while the perpetually frustrated Ben finds himself in the awkward position of having his manhood undercut by Satan-in-waiting. To the extent that “Rapture-Palooza” is appealingly cast, this works in fits and starts.

The problem is that the Kevin Smith-type or “South Park”-y, sacrilegious stuff doesn’t play, because it’s not elevated, smart and specific enough. Plus, there’s no inner logic, even given the very low ceiling of the conceit. (With the collapse of civilization, the idea of Ben and Lindsey saving money to operate their own sandwich cart so they in turn can afford to buy a house seems off. Presumably there would be lots of homes newly available, yes?)

The movie is basically one big extended, inch-deep riff. It establishes the Beast’s infatuation with Lindsey in short order, gives her eight hours to decide a course of action, and then has she and Ben devise and then attempt to implement said plan to take him down. Laden with voiceover, a compacted first 15 minutes sketches out some of the specifics of this particular post-apocalyptic world, but “Rapture-Palooza” ignores much fun that could be had with the notion of the Anti-Christ as a former politician, even in ancillary fashion. In fact, pretty much every good idea it has — the notion, for instance, that Lindsey’s mom (Ana Gasteyer) is sent back to Earth after complaining too much at the gates of Heaven — it abandons in short order (frequently in favor of some bit of borderline obscenity from Robinson), as if it’s engaged in a game of plot-point hot potato.

The high point, for those who remember the glorious Sideshow Bob rake-to-the-face bit from “The Simpsons,” involves a litany of repeated shootings when Lindsey and Ben’s plan goes sideways. In its sheer over-the-top absurdity, it elicits out-loud laughs. Unfortunately, it’s too little, too late for “Rapture-Palooza,” a movie bogged down in a tedious spin cycle of crassness. 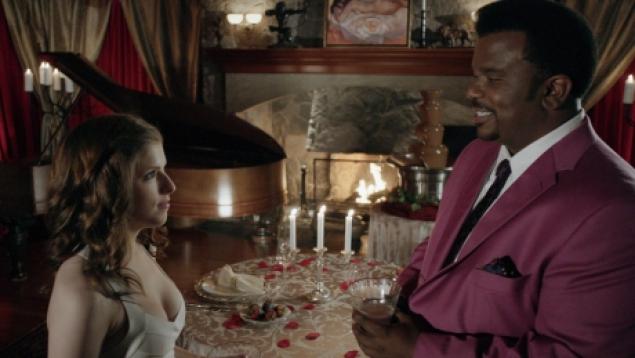