From Rod Serling’s “The Twilight Zone” to “The Simpsons Movie” and Stephen King’s “Under the Dome,” the notion of an area being impenetrably sealed off from contact with the outside world is a well-worn one, full of rich and easy dramatic veins through which to explore notions of human fallibility and transcendence. Unfortunately, said concept gets a tired workout in writer-director Julian Roman Pölsler’s plodding adaptation of Marlen Haushofer’s eponymous 1962 novel — a German/Austrian import so weighed down by a stereotypically angst-ridden voiceover of emotional numbness and philosophical despair that one could be forgiven for thinking Werner Herzog wrote it as a goof.

Set against a beautiful and at times stark northern Austrian mountain landscape, “The Wall” tells the tale of a nameless woman (Martina Gedeck) who finds herself suddenly and inexplicably cut off from all human contact when an invisible and impregnable barrier surrounds the cabin where she’s vacationing. At first her only companion is a loyal dog, Lynx. Later, there’s a cow she comes across and names Bella; later still, a kitten she dubs Pearl. The only people she sees, however, exist frozen in time, outside this bubble. After only a couple rather cursory attempts at breaching the wall, the woman focuses her time on survival (changing weather continues unabated in said space) and her psychic energies inward; the film then cuts back and forth in time, as she records in a diary notes from her stay of several years.

Certain critics have praised “The Wall” as intensely cinematic, but apart from its natural scenery and superb sound design (the wall is given an electromagnetic hum) this could scarcely be further from the truth. Pölsler never cracks the basic problem of nonverbal identification, and rather than even try to let his audience live, labor and panic alongside Gedeck’s character he instead ports over or invents large swaths of morose narration marked by maddening equivocations. A typical passage goes like this: “I sometimes think X. (pause) I don’t believe that, though — I just wish it so.”

The result is a movie that feels antsy, uncomfortable in its own skin and — somewhat paradoxically — manic. While some of its observations are interesting (fixing a fox in the sights of her gun, the woman muses over the notion of passing on injustice, since the fox’s only sin is its lack of camouflage), they don’t deepen a viewer’s emotional investment in the woman’s life-or-death struggle. While it piques one’s curiosity in the source material, the film version of “The Wall” plays out in dull, schematic fashion, like an exercise in theory and philosophy.

It’s true that “The Wall” flirts with a couple interesting side streets. Is it maybe a rumination on gender (given the woman’s comparatively low level of interest in escape), or perhaps even the disposition of our species (“Lynx couldn’t resist the urge to be happy,” one passage of comparative voiceover tells us, though there’s little evidence of this)? Ultimately, though, the movie never commits to much of anything that might contravene the writ-large Metaphorical Import of the place and era of its origin, in the shadows of the Berlin Wall.

The film’s strongest selling point is certainly Gedeck (the Oscar-winning “The Lives of Others”), who brings a quiet intensity to her role. An easy point of comparison is certainly Tom Hanks’ performance in “Cast Away,” and watching “The Wall” one at times yearns for that movie’s relative bravery — for the interminable narration to be stripped away, and Gedeck to lead us further into a darkened head and heart. It never happens, though. For a much more interesting portrait of the unforgiving nature of the wild, consider Herzog’s “Happy People: A Year in the Taiga” instead. 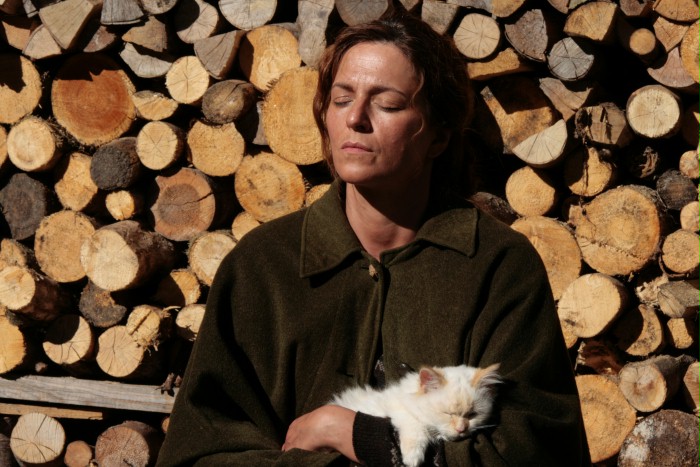