“World War Z” is formulaic and predictable, but the thrill of watching Brad Pitt survive the impossible and do his part to save the world makes it a satisfying offering for the summer season.

It’s a typical day for the Lane family – until they drive their car straight into a hoard of ravenous zombies. Even with the bitten turning in seconds all around him, Gerry (Brad Pitt) manages to get his wife (Mireille Enos) and two young girls (Sterling Jerins and Abigail Hargrove) to safety with the help from an old pal from Gerry’s United Nations days, Thierry Umutoni (Fana Mokoena). The catch is, Thierry wants Gerry back. Gerry ditched his UN investigator duties to spend more time with his family but now, Thierry is convinced that he’s the guy to track down patient zero and fix this whole thing.

One of my favorite parts of a disaster movie is seeing how people react and life changes as the impending doom approaches. It isn’t always necessary – like in “28 Days Later” where Jim first wakes up 28 days into outbreak – but if you’re going to dabble in pre-disaster character development at all, you might as well dig deep. The catastrophe will be all the more impactful for it. Sadly, “World War Z” misses the mark in that respect.

Gerry’s a guy with a wife and kids who love him dearly and very much need him around. You feel for them, but not as strongly as you should and that’s an issue that begins to fester almost the instant the film begins. The credits role over a series of news clips, vaguely setting the scene, but they offer almost no information on the state of the country and the world in regards to the rabies outbreak. From there we jump right into an average morning in the Lane house. There’s a charming dynamic between Gerry, Karin, and the kids, but nothing unusual or striking, branding them an average American family and nothing more.

Rather than fix the issue by spending a little more time with them, the narrative jumps right from a quick breakfast scene to the group sitting in the car right before they’re attacked. Not only does it feel incredibly rushed, but it’s also a little confusing. It’s implied that Gerry is left to clean up dirty breakfast dishes while Karin takes the kids to school or wherever they’re off to, but then they all wind up in the car together, in the city, for no reason. Emotional investment is thinner than it should be from that point on, but fortunately, once the action kicks in, “World War Z” at least becomes the next best thing, a face value summer romp.

There’s a number of instances when director Marc Forster’s shot selection will leave you scratching your head, unsure of the geography and where the threat is in relation to a safe zone, but generally, “World War Z” is loaded with impressive battle set pieces. Even after seeing it at CinemaCon, the airplane sequence is still above and beyond. Much of the horror of “World War Z” comes from the fact that the infected turn quickly and once they do, they’re fast, so if you’re in a confined space and someone’s bitten, you’re doomed in a matter of minutes. The thought and then the sight of this going down on an airplane, thousands of feet in the air, is incredibly unnerving.

There’s also a sequence in South Korea that’s rather memorable courtesy of James Badge Dale. He doesn’t get much screen time, but when he does, he commands your attention more than most, making him one of the more effective supporting characters. Daniella Kertesz turns out to be a nice surprise as well. She plays Segen, an Israeli soldier assigned to protect Gerry. There’s a strong and unique chemistry between the two, and you can also feel the fact that they need each other, making their scenes the most suspenseful. If only Gerry’s relationship with his family did the same.

The first act of the movie is all the Lane family and even then, you’re not quite at the edge of your seat, hoping they make it out together, so once they split up later on, that element of the story just fizzles out. Pitt is an undeniably natural leading man, but “World War Z” suffers from a lack of supporting characters, one of which should have been Enos. Even though Karin is far from a fully realized character, Enos does what she can. But had Karin faced and dealt with more conflict while Gerry’s away, the film would have had the strong secondary storyline it needed and, in turn, enhanced the effect of Gerry’s efforts.

Still, this is an instance where the core concept is so appealing that it’s okay that emotion and character development take a back seat to the action. “World War Z” is very clearly a PG-13 movie, as it’s almost distracting how often they cut away from gory shots that feel as though naturally they should come next, but that’s what makes this a simple summer thrill. “World War Z” proposes a deeply haunting scenario and involves some serious mass death and destruction, but because the characters only have so many layers and the script doesn’t dig deep enough to address the sheer horror of the situation, it doesn’t require or deserve half as much thought from the audience. And that’s not necessarily a bad thing. Every now and then, experiencing an adventure on cruise control makes for a sufficient and welcomed escape. 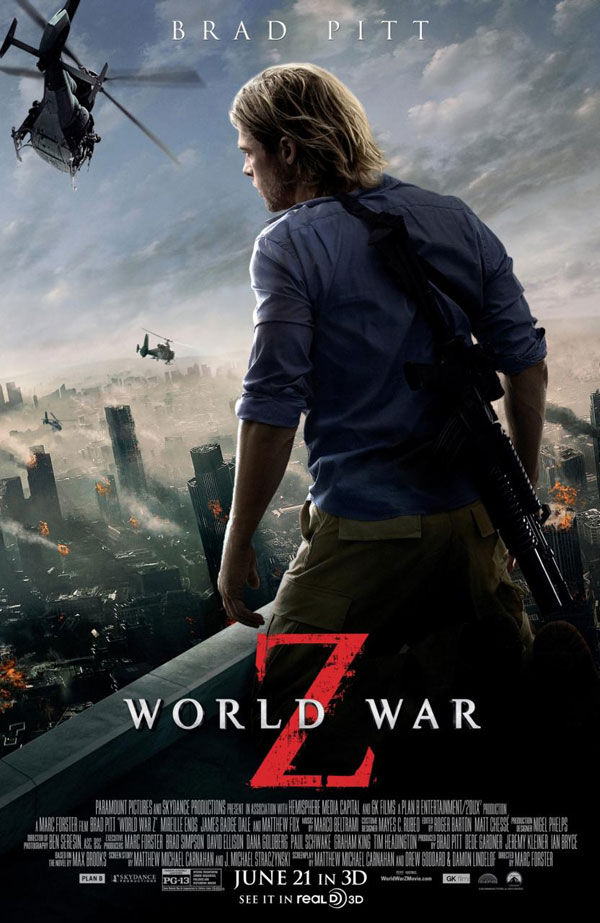