While I was walking my cairn terrier one day, a five-year-old approached with his father and asked if he could pet the dog. No problem there. The terrier licked the lad’s hand, resulting in the kid’s crying to his dad, “He bit me; he bit me!” Without even looking for evidence of the slightest scratch on his son’s hand, the father gave me a dirty look—I thought he’d come out swinging. But he walked away in a huff. Moral of that story: kids lie, but in this case he did not exactly lie. He was probably confused and thought he was bitten. Such is the case with an innocent-looking lass in Thomas Vinterberg’s “The Hunt,” a taut, riveting drama taking place in a small Danish town where, as in the Cheers bar, everyone knows your name. Five-year-old Klara (Annika Wedderkopp), tells a day-care center mistress that Lucas (Mads Mikkelsen), a kindergarten teacher recently divorced with a son Marcus (Lasse Fogelstrøm) who lives with his mother, exposed his penis to her. While this is wholly untrue, Klara seems a confused girl who in a huff for what she considers a rebuff by Lucas, says “something stupid.”

As with the dad who believed his son was bitten by my dog, the town has no questions asked, guilty until proven otherwise. Lucas is fired from his job, becomes subject to arrest, and is confronted with an entire team of small boys who now makes up stories similar to Klara’s. Anyone who thinks that small children never lie must be more innocent than Klara, but in this too-small town, almost all the entire community shuns Lucas as a pervert. Not even his English-speaking girlfriend Nadja (Alexandra Rapaport), believes him. He is not even allowed to shop in the local supermarket and shocks the entire congregation of the church when he shows up for Christmas Eve services—at which time a terrific confrontation takes place.

If you’re thinking of Vincent Garenq’s drama “Présumé coupable,” about a man accused of being part of a sex ring that molests children, or of Jacob Thuesen’s “Anklaget,” about a 14-year-old who accuses her father likewise, then you are a cinema buff. Americans are more likely to recall Lillian Hellman’s play adapted by William Wyler into a movie “The Children’s Hour,” about a troublemaker who accuses two of her teachers of being lesbians. Some kids lie because they’re hostile; others, as in the case of “The Hunt,” because they’re ditzy. Little Klara, who may have been inspired by her brother’s iPad porn, spills the faux beans to Grethe (Susse Wold), the head of the day-care center, after which all hell breaks loose.

One would think that Denmark, one of the fountainheads of democracy and tolerance, would contemplate the facts before turning against Lucas: in fact only Marcus and Marcus’s godfather (Lars Ranthe), believe in the man’s innocence. For the rest of the town, composed of people who think nothing of killing innocent deer and of confirming a 16-year-old’s manhood as the date he gets a hunting license, it’s ostracism and worse—beatings, window breakage, and lots more.

Denmark looks positively crisp at Christmas-time under Charlotte Bruus Chrstensen’s lensing, which records one of the good points of living in a small town, namely the vibrant camaraderie of the men who engage in everything from loud drinking songs to winter dips in the local lake.

If the topic of false charges is less than original, “The Hunt,” which was Denmark’s first entry into Cannes Festival competition since 1998, is graced by remarkable acting particularly from little Annika Wedderkopp in her debut role and by the always reliable Mads Mikkelsen (Cannes winner: Best Actor) as victimized teacher. The final seconds are a shocking surprise, one which may go down in 2013 film history as the most earth-shaking. 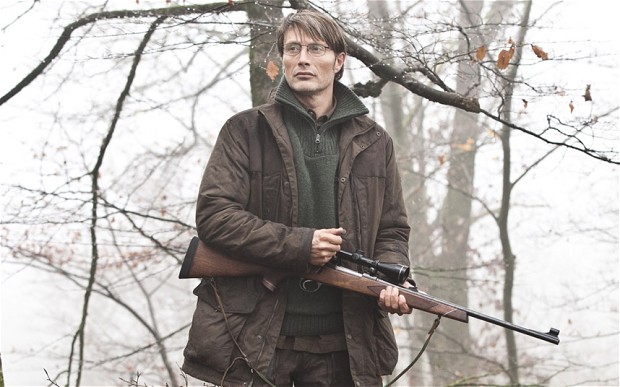