There’s a lot of aspects about “Monsters Inc” that stood out in the minds of kids and adults alike, and one of those were the voices of our colorful monsters. In “Monsters University” we embark on the journey of a young Mike (Billy Crystal) as he goes through the turbulent years of college as he discovers whether or not he’s got what it takes to be a monster.

Billy Crystal returns to voice the younger version of the monster and, like the rest of us, relates to his struggles to become what he wants to be and what other options life may throw our way. The veteran actor sat down and talked with us about being part of the Monsters team again, his fantastic relationship with John Goodman and working with a new director on a Pixar property he’s very familiar with.

You’ve done very few sequels in your career. Was the idea of doing a prequel a little bit more appealing to you than doing a straight sequel?

Billy Crystal: Well I wanted to play him no matter what and I knew that if they wanted to do one again ’cause they hadn’t I think they had only done “Toy Story 2” at that point, we were already doing this when 3 came out. They hadn’t really thought about doing sequels and I really respected that they’re always frustrated ’cause I thought there was this “there’s gotta be another one!” ‘Cause people still love this story, the first one was so imaginative. As the years went by well you know in a phone world or the computer world, a year is like 100 years. You got that phone? That’s a year old! And it’s like, look what this one can do! But more and more families were seeing the movie, more and more kids were getting turned on by the movie. More and more people realized that’s a great movie that first one. The vision of it is really sophisticated. What’s in the closet? What’s in the door chase? It was phenomenal! I think they kept listening to people saying, more, more, more! But they wouldn’t do it unless they had the way to make something special, which is what they do here. I think that’s sort of why I was thrilled that it was this and not just another run ’cause everyone thought well, they loved the little girl, Boo, so much and everyone comes up with stories. “So I was thinking about it,” says my 79-year-old aunt, “Why don’t they, the girl, Boop? No Boo! They have to go in the real world and find her and they can’t get back? The monsters are trapped in the…” A lot of people were talking about that. There would be something about Boo, so I would think that was almost too easy for me and predictable. This is unpredictable.

Being the star of this franchise I assumed they contacted you extremely early on in the process, but the way that Pixar works, their stories change constantly. Were you present to watch the evolution?

Billy Crystal: Here’s how I was contacted. I was a peer for a surprise party for John [Goodman] for his 50th birthday. And it was one of the great surprises of all time. He thought he was gonna watch Robin do a concert outdoors. And they drove him up to, I forget where the space was, and he’s backstage with Robin, who usually doesn’t have anyone backstage with him, but John didn’t know, and they said, we’re gonna walk you to the stage now Robin. They really did it great. Nancy just lied to him constantly and had flyers made for this concert. And fake tickets around the house and all that stuff and so they walked him, he was backstage at this facility, meanwhile we’re all out on the lawn, there’s about 1,000 of us. Robin said come with me, there’s a place where you can watch right off of in the wings, it’ll be the best place. And he went, great! So they walked on the wings and they said, right through that door, and he walked out the door, but he’s on stage with us and he looked out and we all yelled happy birthday. And the surprise was his birthday was six months prior to that. If it was someone in the closet, it was Nancy plotting something. I don’t remember your question. Oh yeah! So then he walked to me at the party and said, after thanks for coming and all of that and the birthday hugs he said, we’re gonna do a sequel, but it’s a prequel, they’re in college and he walked away. That’s all really he had to say at that point ’cause they probably didn’t know much more. But it just led me to think about what that world would be like and then the next week we started talking about the event stuff and then like I said, but what’s Mike’s thing? He says he finds out he’s not scary.

You worked with John Goodman together in the same booth most of the time. How much of the dialogue came organically from you two just riffing off each other as opposed to what was on the script?

Billy Crystal: Most of it’s on the script. And in the booth with John I’ll just go, I got something. He says, go! He’s a great listener. It’s like a trapese. I’ll do the spins and he’ll catch me. And sometimes he’ll go off and I’ll catch him. It’s a very good amiable friendship and Dan protected his script, but also said we could use a little something else here. I’m telling you the CIA doesn’t work as well. You get the pages the night before, Fedex, and it’s disguised to look as something else. It’s like oh your farm tools arrived! Oh it’s my script! And then you have to hand them back as soon as you get there the next day, but there would be a note from either Cory or Dan needs something here, what do you think, or any other thoughts, stuff like that. We do play around a lot. How much of it ends up sometimes I don’t even know once I see it. When you know when you do something over two years now, you don’t remember. I don’t remember this morning.

Did you make a conscious effort to make your voice sound a little younger or did you let the character go and not worry about that?

Billy Crystal: I sort of let him go. We tried. It was more about attitude and word choices sometimes to say things and do stuff, but it was more attitude with them. John has a couple of gafaws and chuckles and awesomes and things like that. His look was more severe than mine. It was hard to really do much with Mike’s ’cause he’s an orb.

You worked with a different director on this one. What was it like working with Dan?

Billy Crystal: Dan is a hipster. I love Dan. He’s a terrifically talented, very funny visualist who really helped us a lot. When you go well where am I Dan, what am I looking at? And he was really able to verbally communicate the space you were acting in even though you’re not. He would created these things so you could actually like see it and he would really push you to try fine tuning things. I love making him laugh because you can’t laugh and then and he’s do stuff like that [hand gesture] til the take was over so I knew that was a pretty good one. He was great and Pete Doctor was terrific and I guess won the Oscar for Up. They’re both very different, but part of the same pedigree.

When you were younger did you want to be a different performer?

Billy Crystal: I wanted to be a totally different performer because I wanted to be a baseball player. And I take exception with one little thing. I don’t think it’s a kids movie only. There’s a kid that’s gonna live in all of you that was 18. This movie to me isn’t about the animals and the things you can buy in the store here. This is about a bigger thing about a time in our lives when you make these things happen to you that may not be what you want to happen. And that always happens. That’s always gonna happen. I’m not the professor of dark here, but it may not be what you want, you gotta be ready for that. And that’s lessons I’ve talked to my kids about, lessons I will talk to my grandchildren probably at some point if they ask me, that things aren’t always gonna be easy. And it’s a good thing to know. So when it happens and you can work yourself through it, then you become a better man and a better monster.

“Monsters University” is out in theaters now. 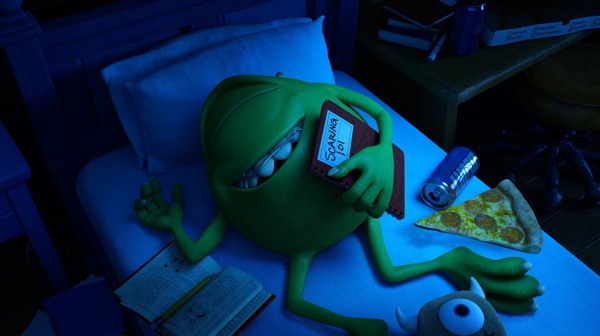