Detention of the Dead Movie Review

Title: Detention of the Dead

“World War Z” is busy presently chewing up the box office, but there’s another zombie tale out there in theaters as well — one likely shot, quite literally, for the catering budget on Brad Pitt’s film. Putting a “Shaun of the Dead”-like spin on one of filmmaker John Hughes’ beloved teen classics, “Detention of the Dead” centers on an oddball (and at-odds) collection of high school students who find themselves trapped in detention while all their classmates and teachers outside have turned into zombies. If its budget and cramped settings sometimes let it down, director Alex Craig Mann, in his feature debut, shows a nice ability to juggle character-rooted comedy and horror, in a manner that would surely make a young Sam Raimi proud.

It sounds damning with faint praise (and I suppose it somewhat is), but the easiest and most honest line on “Detention of the Dead” is that it’s better than it has any reasonable right or need to be, given its aims. A calling card for its maker and young cast, the movie isn’t seeking to reinvent the wheel or radically reinvent formula, and yet the extra thought and care put into it on various levels of production is evident throughout. Composer Cody Westheimer’s score, for instance, is a buoyant treat, as are a number of smart song selections, from Nada Surf’s cover of “Where Is My Mind” to Band of Skulls’ “Impossible” and the Sprites’ peppy, closing “George Romero.”

Working from a script co-written with Rob Rinow, Mann blends together quip-based comedy rooted in familiar high school archetypes, but never in a way which sells his characters short or completely empty. One unusual thing is that the film’s roots lie in a stageplay — a fact which obviously informs some of the slapstick-y horror setpieces that crop up in the second act and beyond. It’s a credit to “Detention of the Dead,” however, that while it possesses a satirical soul (and indeed apes some of the set-ups of “The Breakfast Club”), it isn’t just explicitly that; it has its own legs underneath it.

Mann also shows the ability to marshal his troops and get them on the same page as to the type of movie they’re making, and that’s not without accident — in addition to directing theater, he has an extensive background as an acting teacher. If Zachar is a bit on the nose as Eddie, he and the rest of the cast still have a great rapport with one another. There are far worse cinematic sentences than this “Detention,” that’s for sure.

NOTE: “Detention of the Dead” opens Friday in select cities, and in Los Angeles at the Laemmle NoHo7. Additionally, it is already available across VOD platforms. For more information, visit its website, at www.DetentionoftheDead.com. 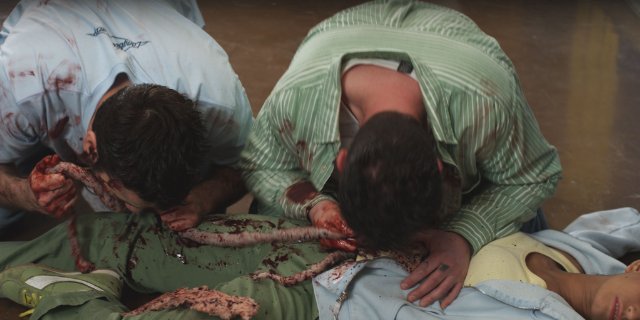