When Brad Pitt, as a producer-star, tackled the sprawling movie adaptation of Max Brooks’ zombie novel “World War Z,” there was a lot of talk about the zombie genre having reached its apex, and possibly being tapped out. On the other end of the budgetary spectrum, though, is something like debut director Alex Craig Mann’s “Detention of the Dead,” which shows that zombie movies are, pardon the pun, unlikely to die off anytime soon. A high school-set horror comedy — think John Hughes meets “Shaun of the Dead” — the film stars Jacob Zachar, Jayson Blair, Christa Allen, Justin Chon and others in a tale of mismatched teens who have to try to put aside their differences and survive a swarm of undead classmates and teachers. For ShockYa, Brent Simon recently had a chance to talk to Mann one-on-one, about his movie, his background and his ambition. The conversation is excerpted below:

ShockYa: If you took a look at the logline of “Detention of the Dead,” I don’t imagine you’d immediately assume it was based on a play.

Alex Craig Mann: And neither would I. When I read the play, I was like, “Are you guys crazy, this isn’t a play.” My background is as a theater major, and I studied at Cambridge University. I studied Shakespeare and performance, so not in an elitist way I just have a certain idea of what a theater play should be. This was very much sketch comedy — there’s a lot of bits. It was about 60 minutes long. We really used it to workshop what worked and what didn’t. At the time, it was five actors stuck in one room with a lot of bits and clever dialogue, some of which is still in the movie and a lot of which isn’t, because one room isn’t going to work for a movie. We had to bring it out, even though it’s still set at one school, it’s just more locations at one school. So it evolved. We started to bring the John Hughes element to it, and more of a “Breakfast Club” or “Pretty in Pink” vibe, where you have a love triangle, two outcasts, a nerd who idealizes the hot cheerleader but should really be with his other friend and stuff like that.

ShockYa: There’s definitely a lot of affection for certain archetypes with which we’re all familiar.

ACM: It’s homage. Those John Hughes films affected me a lot growing up, and though I’m a fan of the genre to do a genre film wasn’t necessarily my lifelong dream. Partially it was about reverse-engineering what I thought could be marketed in today’s economy. The fact is that a genre film has that potential a little more easily than if you gave me a script about a piano player and the Holocaust. That’s a tougher sell. So what I liked about the film and what we turned it into was that it had those elements that I thought could be sold, but I also added my sense of aesthetics and some of the goofy comedy too, which is personal to me.

ShockYa: What you just articulated is something that’s interesting to me — that the marketplace has a relationship with the creative process. A lot of writers and directors don’t like to talk openly about that. Is that reality frustrating for you, and what sort of process do you go through?

ACM: I suppose in like the 1950s and ’60 or ’70s, when there was a rawness to the process, the mentality was different and for young filmmakers at that time it was all about being a rebel, like, “What’s the art about? Forget about the dollar!” But I think today’s filmmaker has been indoctrinated into the process in a different way. I’m very mindful of it, and rather than being frustrated by it I embrace it. I see it in a practical way… like, I’d love to be able to come in with a techno crane and do (the opening) in one long shot, like that great shot at the beginning of “The Player.” But obviously I have producers (and financiers) who say you can’t afford that, so it just becomes part of the puzzle: how do I solve it, how can I “out-create” that obstacle? I just make it part of the game. Don’t get me wrong — I hope to work my way up to working with a studio, and I hope that somebody at a studio reads this because I think I’d be perfect for them. I embrace the value of what can be done, and how to shoot things in the most efficient way that still has a return on their money. I think to deny that is self-destructive.

ShockYa: What I love about genre (movies) is that filmmakers tend to get a little more freedom. When you have people that are emotionally invested in the material and have an artistic sensibility, you’re able to do a hell of a lot of things that are fun and interesting and different, without the pressure of (financial return on) a $150 million budget.

ACM: Exactly. But don’t get me wrong — I want that pressure one day, mostly because that means that chances are that I will have gotten paid something, which is always nice.

ShockYa: What were some of the things that you would have liked to have done on “Detention of the Dead” that maybe the pressures of time and money didn’t allow for?

ACM: Literally days before I said action I sat down with my producers… and when you have experienced people around you, you have to pay attention. So I cut 10 or 12 pages, and of course when you cut something you have to fill in the gaps. There were a lot of bits that were maybe funny but weren’t forwarding the story. So maybe it got tighter and better. But I would have liked to do some comedic stunts that would have required wirework. That, I think, would have been a lot of fun to see.

ShockYa: What was the casting process like for you on the film?

ACM: The biggest thing that I was doing in the casting process — from asking the casting director questions about the actors to asking questions directly of the actors and in the audition process directing them — the number one thing that was important was their attitude. It’s my first film, but even if it wasn’t my first film, it wasn’t like I could add a day. I had to bring people with me who had a great attitude and could deliver — it’s like a big family. …If there was any hint of anything in the audition process then you were no longer eligible for me, because I had too much at stake. I wanted a happy and upbeat and cheerful lot to take with me on location. One misfire and I’m done — it’s not like “World War Z,” where I can re-shoot the third act. That’s not happening. …We had 20 days to shoot, and my actors all came in to Michigan four or five days early for costume and make-up tests and what not. And then I was able to get them all together either individually or in groups for (a rehearsal of) the work (and scenes) that required more acting.

ShockYa: Tell me a little bit more about your background, which is in theater. Are movies and TV part of a larger professional “target” for you, or is it all basically the same?

ACM: I teach a professional acting class at the Beverly Hills Playhouse. I love working with actors, and teaching them how to be the best they can be, so that will always be in my heart. But part of what I love about film and TV is that you get to reach more people. It took me a long time to get to know myself, and I think for a long time I was trying to be too much like a young Brando or Dreyfus and Hoffman — I would pooh-pooh sitcoms and such, when in reality when I was younger I was probably perfect for that. But my criticism of that probably pushed it away as an opportunity, and that was silly. As I got older, I realized that every night I probably re-watch an episode of “Family Guy.” Like, I’m a simple guy, it turns out. So my dream, I guess, or the kind of director I’d like to be, is to take that interesting type of stuff — goofy comedy or a genre film or a superhero film like “Man of Steel” — and then bring my sense of aesthetics to it, my sense of storytelling, of being able to work with actors to create works (that are) not only entertaining but inspiring and full of depth in the performances. That’s really my dream. 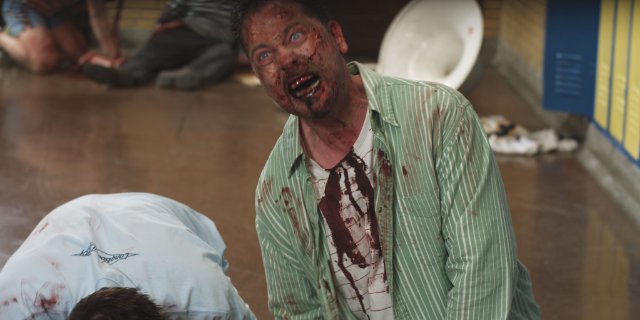