At the heart of a lot of John Hughes’ most popular movies from the 1980s, there was, broadly speaking, tension between an uptight geek and a jock or more extroverted guy. Jacob Zachar (“Greek”) and Jayson Blair (“The New Normal”) occupy those roles in Alex Craig Mann’s directorial debut, “Detention of the Dead.” Oh… except the movie also features zombies, in addition to a handful of other at-odds high school archetypes. For ShockYa, Brent Simon recently had a chance to speak to the actors in person, about their experience making the movie, Blair’s most awkward audition experience, and more. Their conversation is excerpted below:

ShockYa: I was surprised to learn that the film’s source material was a stageplay.

Jayson Blair: Yeah, it’s interesting because in the play they didn’t really expand on the evolution of the characters at all — it was slapstick-y, and big and broad. But in the film they started to really create some great arcs for everyone. You’re doing this comedy-horror film that also has some really surprising moments of heart and truth to it, given the struggles that we go through in high school and stuff like that. And it also kind of makes fun of that as well.

ShockYa: Given that it’s basically six characters locked together in the same room, it’s really important to have right cast for a movie like this, and have everyone on the same page. Was there a lot of time to rehearse, and what sort of guidance did Alex provide prior to shooting?

Jacob Zachar: We had a little bit of rehearsal time together, which he really forced — because we didn’t have a lot of time for the film. And of course there wasn’t a lot of time to figure it out as we’re shooting since it’s just an indie film. I think in that sense we didn’t have enough time to be conscious of the type of film we were creating. Something was always fresh based on what we were filming that day — whether it was, “Hey, here’s the scene where the zombie grabs my dick,” or tomorrow I’m falling in love with her. The contrasts drew you to the script, from an acting standpoint, because it seemed like that there was always something new.

JB: It was a lot of fun, too, because (Jacob) and I were the first ones cast and (Alex) actually gave us a lot of say in who else got cast, which was nice to know that he trusted us enough as actors to help him bring this amazing story to life. The rehearsals were a blast, and Alex is so great with giving notes. I was having some trouble with the story in a couple places and him being an acting teacher really, really helped my character’s transition. A lot of writer-directors are so attached to the material that if something’s not working they can’t even understand on set the idea of letting a couple words go, but he’s not like that at all — he’s just about making whatever is best for the story.

ShockYa: You said something interesting, about not really having a chance to stop and think much about what type of movie you were making. Given the juggled nature of its disparate tones, however, were there any movies Alex referenced, or recommended watching?

JZ: Well, the only thing he might have recommended were John Hughes movies, which is funny because in a zombie movie you think you might have to check out some horror movies to do the horror right. And Alex was like, “No, learn how to do the heart right.” Bring the real qualities of these characters to life. That really helped with doing my character, because you’re starting the film at the darkest place of Eddie’s life, which is on the verge of committing suicide. So by the end, the script was so attractive to me because you’re starting there and then have a chance to find and reveal your courage deep down by the end.

ShockYa: Since the audition process is different than delivering a performance on set, how do you guys feel about that — do you feel at all good at it?

JZ: (interrupting) Someone’s brother-in-law is in town! (laughs) You’re trying to create something real, but he also may be producing.

JB: It’s hard to get rid of all that, and focus and read with one person while some guy is cracking pistachios. (laughs) You ask if maybe he could stop doing that, and then you’re an asshole if you ask for respect for the eight hours that you put into something — if you could have just two minutes of their time. So the process is really hard. It’s so hard in this profession as it is, but you also have to know that that’s exactly what you’re getting into. It’s obviously worked out for us enough, but I still don’t feel like I’ve cracked the code on that yet.

ShockYa: Any particularly memorable horror stories either of you have?

JB: Yeah, I have a horror story. My mother was in town, and I had this huge director and producer session for this film that I won’t say the name of — but it was a very big film, and a great role. I was driving with my mother and I sneezed. I go in, I audition and I come back and am in the car and look down, and my crotch is snot-covered. It looked like a giant load. (laughs)

JB: It was like this cobwebbed, gooey mess, and I was so embarrassed. I was like, “Mom!”

JZ: That’s something you couldn’t control, though.

JB: Nobody said anything, but it was like Spider-Man went nuts on my johnson. (laughs)

JZ: That’s a very particular story, but most of the time it’s like you walk out thinking, “I was terrible, I’m done in this town,” but you were actually fine.

JB: I’ve also had a casting director bar me from her office because I was asking her very educated questions about the story, and I didn’t know that she cast this other show that I was referring to, because I’m not a manager or agent so I’m not doing research on that, I’m just researching the story. She was like (in chilly fashion), “Yeah, I cast that show.” And I said, “OK, cool,” and then had another question and she was just fighting with me about it and I was like, “Um, can I read?” So I read and I’m supposed to be in love with (the character she’s reading) and I mess up the monologue I have and go off the page and ask if we can start over. And she says, “Yeah… do you want to?” …I leave and she calls my manager and says, “Never again — this kid is ridiculous, he didn’t know I cast this show, who does he think he is?”

ShockYa: What’s next for you guys? You both live here in Los Angeles, right?

JZ: Yeah, we’re both here in L.A. I saw a very funny film that Alamo Drafthouse found footage for, “Miami Connection,” which is sort of this really bad action movie. So my friends and I, we’re playing on (Steven) Seagal movies — we got a group of friends together and have a guy named Action Dan, and we’re filming a series of sketches where we re-create shot-for-shot his old fight scenes. There’s this interesting contrast between these bad fight scenes in the past with new technology. These cameras make the footage look amazing — the (Sony) RED makes anything look like “Saving Private Ryan,” but bringing this fight scene that has some comedic value to it (to life) with this beautiful technology — there’s some balance that makes it very humorous. It’s called “Action Dan.”

JB: And I start shooting in a couple weeks on a film called “Married Young,” where I play a character having an affair with one of the women, and mess up their marriage. It’s fun, it’s a comedy. Kaley Cuoco is attached right now and they’re figuring out the other leads. I’m having to get in shape because I have a scene in my underwear. So… if anyone out there has a serious drama, I’ll do it! 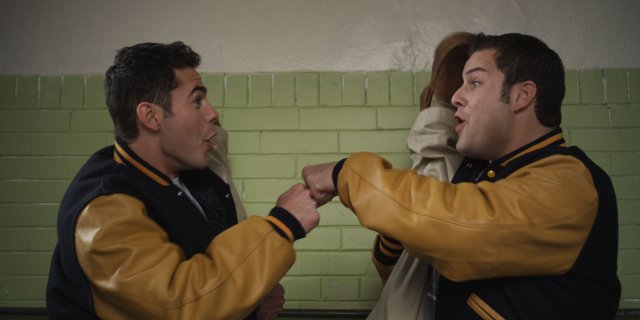