Themes of cultural identity and disunity figure prominently into the work of director Rachid Bouchareb, including 2006’s “Days of Glory” and 2011’s “Outside the Law,” both of which were nominated for Best Foreign Language Film Academy Awards. Bouchareb’s English language debut, “Just Like a Woman,” however, is a phony female fantasy — a minor chord variation on “Thelma & Louise” with none of that film’s panache, verve or insight. Instead tone-deaf and at times downright insufferable, this road trip flick in which bellydancing holds the key to feminine enlightenment most notably begs the question of just how long into its 90-minute running time it can go before someone inevitably says, “Just feel the music and let your body decide — it’s all about sensuality.”

Recently axed Chicago secretary Marilyn (Sienna Miller) has a loutish, philandering husband (Tim Guinee) straight out of Central Casting, so it takes but a slight nudge — him being delivered more than just a pizza by the delivery girl — to get Marilyn to follow the advice of her evening bellydancing class instructor and light out for Santa Fe, where, you know, there are those open auditions coming up for that great bellydancing company. Egyptian-American Mona (Golshifteh Farahani), meanwhile, lives with her shopkeeper husband Mourad (Roschdy Zem) and bitch mother-in-law (Chafia Boudraa), who never misses an opportunity to upbraid Mona about her inability thus far to get pregnant. Marilyn and Mona are initially little more than casual acquaintances (the former stops in occasionally for soda and cigarettes), but after a domestic accident leaves Mona questioning her future with Mourad, the two women escape their unhappy marriages and hit the open the road. There they, like, learn about friendship and stuff — by way of racists at RV parks and creepy club owners who book same-night, traveling freelance bellydancers.

Thrice-nominated for Oscars, Bouchareb conceived of the story for “Just Like a Woman” himself, but pulled in Joëlle Touma and Marion Doussot to collaborate on the screenplay, presumably in an effort to give it some sort of estrogenized bona fides. The tack does not work, alas. Bellydancing specifics aside, the plotting feels like it was assembled from pamphlets from a women’s shelter along with a very stupid and condescending episode of “Law & Order,” centering around an ethnic minority community.

Marilyn especially is a cipher (given what unfolds on screen, it’s hard to account for a 10-year marriage with no kids), and everything around the edges — all the film’s small details — seems cobbled together from some sort of fantasy checklist of feminine escape. (Marilyn’s car is a convertible, naturally, so the ladies’ hair can get whipped around in the wind; that’s symbolism, see.) Most damningly, though, the film doesn’t allow for a meaningful exploration of a deepening, substantive female friendship. Instead, it invests time and energy in this dark secret hanging over Mona’s head back in Chicago.

With her too-baggy jeans, Miller tries to “frump down” a bit, and she and Farahani do succeed in conveying a basic level of vulnerability. But there’s a wearying obviousness to “Just Like a Woman,” and no amount of bellydancing in the world can redeem it.

NOTE: In addition to its theatrical engagements, “Just Like a Woman” is also available across VOD platforms. 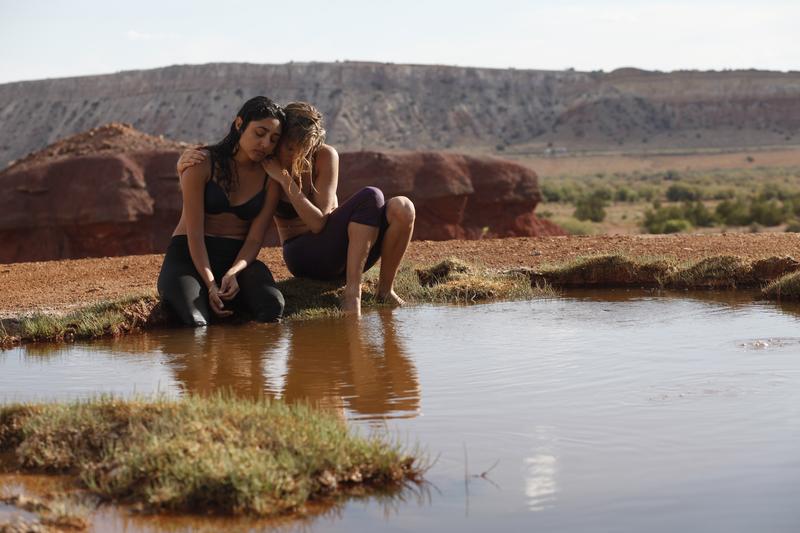