Screened at: Vimeo for critics

When you come home from a trip to an exotic land, what do you tell your friends? “Beautiful out there. We had a wonderful time. Can’t wait to go back.” And what do you hear from your pals when they return from trips to exotic lands? Probably more of the same. Did you ever hear someone say, “The trip sucked from start to finish”? Maybe, but not likely. After what you paid, you don’t want your friends to think you were a sucker, and what’s more you went there to make them envious, didn’t you?

We don’t know what Teresa (Margarethe Tisel) told her own Austrian circle when she returned from a trip to Mombasa, Kenya, because director Ulrich Seidl completes the film without leaving the East African state. But we sure know how she felt. She went to Kenya with a purpose, a safari, if you will, but not the kind of safari they advertise at Lindblad or Cook’s. The tubby fifty-year-old, hair tied up in a bun, went with three friends—only one of whom sporting a body mass index below thirty—on a sex tour. Divorced, single, whatever, these desperate hausfraus are horny. They either can’t find fellow Austrians to satisfy them or they believe the myth that African men are all terrific in the sack. Seidl’s cinematographer, Ed Lachman, trains his cameras on the beach with the chairs lined up, on the hotel pool where the social manager engages the Europeans in a bunny-hop, inside the room of what looks like a three-star hotel, and within the slum apartments of some of Kenyan natives.

On the tour bus, the leader raises hopes by teaching a few words in Swahili, principally “kuna matata,” which means “No problem,” or “Don’t worry, be happy.” Such will not be the fate of Teresa, whose only really good time are the hours she spends with her trio of women friends as they laugh raucously, talk dirty, and brag about their success with the local beach boys who line up between the tourist chairs and the ocean selling trinkets and themselves. The Kenyans are all slim. One of them can do acrobatics, walking on his hands and bending backwards like Regan MacNeil, who is Linda Blair’s character in “The Exorcist.” By contrast, the white woman are decades older and for the most part displaying bodies that have lunched too often on sachertortes.

Margarethe Tiesel, star of quite a few TV movies, is in virtually every scene, now coyly shrugging off the many vendors of trinkets by promising “tomorrow,” and even rejecting the advances of one man whom she meets in his room before she finds guys who are more to her liking. She is trying to see in these Africans what her friend tells her, that they “smell like coconut,” and they are first-class studs, but she is regularly disappointed. Her rage, which she in one melodramatic scene bursts forth in the ocean as she slaps one of the men around (she catches him lying about his “sister”), but in several poignant scenes she turns her anger against herself, breaking down on a fit of crying.

At her age, she should know not to trust these guys who hang around the beach or circle her regularly with their motorcycles, offering rides and more, but she falls for their charm and for their lies about a sister with a child whose husband ran off, about a guy whose friend was in an auto accident just hours before. They profess to love her, and she seems willing to take them at their word, or perhaps the attention she gives them allows her to fool herself into thinking they have some affection for anything but the Kenyan schillings she carries in her handbag.

It’s not clear that director Seidl wants us to laugh at these self-deprecating souls who are well aware that their breasts are sagging, that their legs resemble those of a grand piano. Or perhaps he wants us to feel sorry for these lost souls who can comfort one another as best they can rather than getting their weight down and dressing presentably, giving them a chance with their middle-aged, fellow Austrian males. What is particularly unfortunate for Margarethe is that she seems to have little to look forward to back home. Her teen daughter, whom she deposits with her sister before leaving on vacation, is typically rebellious and does not even answer her calls or texts, which she issues every so often to assure the lass that “everything is beautiful: there are camels on the beach.” The African men display enough charm to allow the Europeans to believe their professions of love and their compliments about the “beauty” of the women. But there is no love to be found in Mombasa, only exploitation. A scene in which a young, slim, handsome Kenyan performs a strip-tease to a quartet of shrieking white women looks too much like a throwback to the bad old says of colonialism and racism. In this case, though, both sides exploit each other in a film that’s often disturbing to watch and requires an audience with a bent for arty films with their long takes and subtle insights. 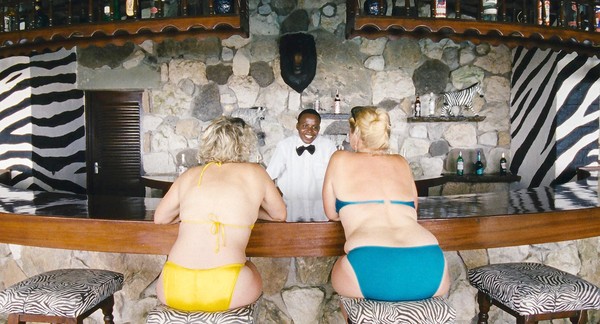