In 2010, Josh Fox’s shocking documentary “Gasland,” with footage of Pennsylvania residents along the Delaware River Basin lighting their tap water on fire, drilled down into the issue of hydraulic fracturing, helping to introduce the word “fracking” into the broader American lexicon. It was a gripping and oddly poetic nonfiction work, and perhaps the most moving piece of cinematic social advocacy since Michael Moore’s “Roger & Me.” An Academy Award nomination for Best Documentary Film followed, along with an embrace by the Beltway punditocracy and an entirely predictable subsequent backlash; Fox became the lightning rod/poster boy for the controversial issue of domestic natural gas extraction.

Following its Tribeca Film Festival premiere, “Gasland Part II” continues the story, with Fox’s trademark deadpan, sardonic narration. Again frequently sporting his beaten-up Yankees baseball cap and hoodie, Fox unspools his tale like an environmental noir. As the map expands nationally and even globally (Australia comes into play), Fox examines key legislative victories and setbacks in fights to establish legal precedent and bring the natural gas industry in line with provisions of the Safe Water Drinking Act. Fox also smartly circles back around and checks in with some of the subjects of “Gasland,” including Dr. Al Armendariz and the mayor of frack-heavy Dish, Texas, who’s planning a move out of town.

Whereas documentary sequels are a fairly new and still rare phenomenon, “Gasland Part II” gives off a bit of the vibe of a placeholder installment — a certainly not-unimportant one, but a time-marking entry nonetheless. It’s bleak at times, with significant triumphs and protections getting overturned and erased. In some respects it’s sort of “The Empire Strikes Back” of what one presumes to be a larger series — a parallel not lost on Fox, who even namechecks that movie in recounting the efforts of moneyed powers-that-be to squash and discredit both he and his first film.

Editorially, “Gasland Part II” suffers a few hiccups. Some of its revelations are notable if still somewhat circumstantial. For instance, in 2009 the American Natural Gas Alliance hired the same public relations firm, Hill & Knowlton, that in the 1950s peddled cigarette advertising featuring doctors touting their health benefits. Tidbits like these beg for further digging or illumination that, even with a running time of just over two hours, often doesn’t fully materialize. Fox, too, has a way of sometimes setting things up (like the practice of drilling in Los Angeles’ Baldwin Hills neighborhood) only to quickly abandon them and then awkwardly loop back, making an over-the-shoulder connection that could work in conversation but is less efficient and persuasive in cinematic form.

Still, if the movie doesn’t always present a reconciled public face for Fox’s various instincts — raconteur, intellectual, grief mop — it undeniably establishes him as a populist authority on the subject of fracking. “You have a lot of upper-middle class white people with college degrees getting ticked off because they’re being treated the way third world indigenous populations have always been treated,” one interviewee notes. If hydraulic fracturing is to remain an integral component of the United States’ national energy plan moving forward in the 21st century — and it is just that in President Obama’s current plans — that phenomenon will only continue to increase. Fox, one feels, will be there too, chronicling the contretemps.

NOTE: “Gasland Part II” premieres on HBO on Monday, July 8. Check local listings for playdates throughout the month of July. 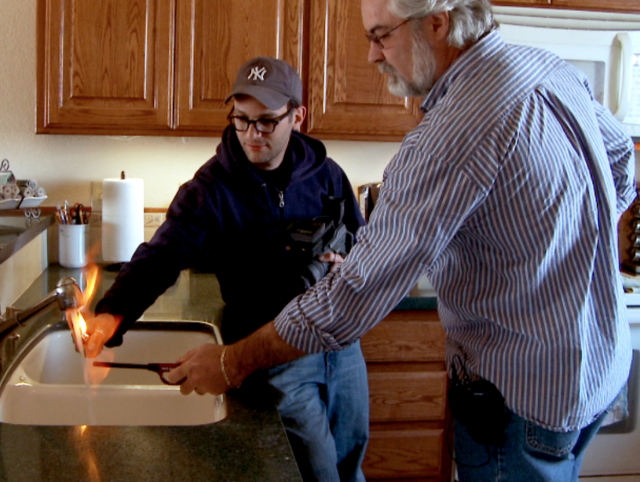